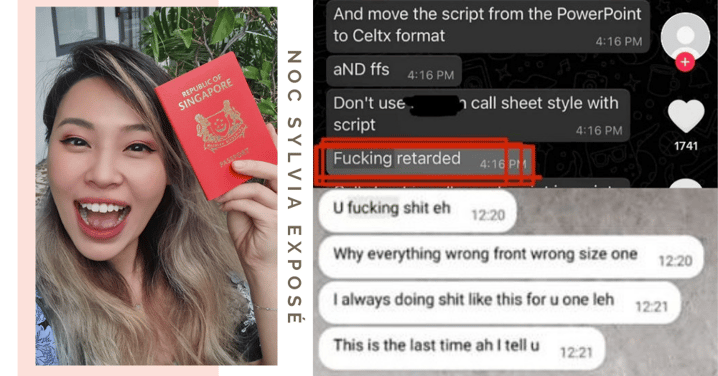 Sylvia Chan of Singaporean YouTube channel Night Owl Cinematics (NOC) made multiple headlines last year - first for her divorce from NOC co-founder Ryan Tan whom she had been in a relationship with for 10 years, and later on for her new romance with a mystery man.

Right now, people are talking about her yet again, but for reasons not related to love or rumoured romances. In a TikTok exposé featuring leaked texts from a group chat, it appears that Sylvia has been hurling vulgarities and slurs at her employees. Specifically, she’s seen openly discriminating against a particular staff member, Samantha Tan.

In other news, Rao Zi Jie’s announcement regarding his departure from NOC has mysteriously disappeared, and at least 3 NOC influencers including Isabelle Quek and Nicole Liel have removed the company’s name from their Instagram descriptions. Also, it appears that Ryan rarely gets to see his dog Porky, and the Shih Tzu’s Instagram account no longer follows his.

Read on to find out more about the exposé on Sylvia Chan from Night Owl Cinematics!

Uploaded onto TikTok and Instagram by an unnamed user that goes by @user12937484636, and @sgcickenrice on the two social media apps respectively, the incriminating series of group chat texts show Sylvia Chan (@sylsylnoc) allegedly using vulgar language on her staff while berating them for mistakes made at work.

Some of these include personal attacks, including a rather harsh, “U f***ing sh*t eh.”

She even allegedly goes on to call someone “f***ing r*******”, which is considered a slur against mentally challenged individuals.

There is not much context to the situation, though it appears that someone used the wrong font in an Instagram post and/or made a bad decision regarding an image thumbnail. The brutal messages in the group chat apparently left the person on the receiving end crying in the office. It is not known as to who this person is, but according to the screenshot, she was apparently used as a “scapegoat” for another person’s mistake.

Sylvia discriminates against employee Samantha and calls her a “f*** face”

On top of the above are a bunch of screenshots showing Sylvia calling her employee Samantha Tan Yifen (@samanthatyf) “f***ing annoying” and a “f*** face”, saying that she hates her and is purposely not going to use her in future videos. This is accompanied with a voice recording saying things like “b**** is f***ing dumb”, and "I want Samantha to exit. Give me an exit strategy."

In short, she’s allegedly specifically trying to slowly oust Samantha from the team by giving her fewer and fewer roles in the company.

It is not clear as to why Sylvia harbours such a strong hate for Samantha, other than the fact that she finds her "annoying".

In a separate upload, Sylvia is seen saying that she “can’t talk to influencers [because] they are stupid” - which seems like a rather ironic statement considering the fact that she is pretty much an influencer herself. It is not specified as to which influencers she’s referring to in particular, but they’re likely from her own company, as she later on says that she’d rather have someone like her colleague Aiken Chia (@aikenchia) handle them instead.

Later on, she highlights the difference between CEOs and influencers, presumably setting herself apart from the rest in terms of intelligence level and capability.

Go to actor and NOC talent Rao Zi Jie’s Instagram page, and you’ll find a selfie with a simple caption reading, “Everybody deserved [SIC] to be appreciated. Be it good or bad. 🙏🏼” as his latest post.

If you were quick enough, however, you would have come across a now-deleted post with a long caption announcing his departure from Night Owl Cinematics after 5 years.

The post seems rather neutral in nature and speaks of his former company in a positive light, however fans can’t help but wonder if his leaving NOC has anything to do with the leaked messages - and a bigger question remains as to why the post was deleted.

At least 3 Night Owl Cinematics influencers, namely Nicole Liel (@lielnicole), Isabelle Quek (@bombiibii), and Samantha Tan - the last of whom is one of the victims in the alleged situation with Sylvia - have removed any mention of NOC from their respective Instagram bios. This dissociation from the company has made fans wonder as to whether they have since quit.

It is not known as to whether there have been other staff on the receiving end of Sylvia’s harsh words, apart from Samantha.

Isabelle and Nicole have spoken up on behalf of their friend and colleague Samantha, saying that she’s a loveable, kind, and hardworking person who puts her all into everything she does.

Isabelle acknowledges that she’s aware of the disparaging messages in the group chat, but chose not to speak up about them earlier as she felt it wouldn’t have been right to tell off Sylvia, her boss. She also wasn’t close to Samantha back then, hence she viewed the comments simply as “passing remarks” and eventually forgot about them - until the messages resurfaced.

On hindsight, she says, “I do feel really bad for letting it slide because I’m sure no one will want to be called such names nor will be happy to find out if [SIC] their sister/daughter/friend was labelled as such.”

Nicole takes a stand against the situation, saying, “Whatever happens from here, know that I do not condone any of the actions and language in the posts. It’s disgusting and dehumanising and no one should be spoken to in that manner, in any situation.”

In a video with his much younger, rumoured girlfriend Cherylene Chan, Ryan speaks fondly of his dogs, Porky and Mantou, saying that they’re “so much better than most humans” that he knows. Porky is the dog that he and Sylvia got when they were still together, but it appears that Sylvia now has “main custody” of the Shih Tzu.

The video then cuts to him saying, “It’s not my choice. That’s the part of my life that you guys won’t know, but it’s not my choice”. This is followed by him mentioning how he does see Porky every now and then through an unnamed female person sending him photos of the dog. The clip then ends with Ryan saying “Unfortunately I haven’t seen Porky for quite some time.”

Fans have thus been wondering if Sylvia has been intentionally keeping Porky away from Ryan.

*Update: According to a fan who caught the full version of the original live video, the person who sends Ryan photos of Porky is not Sylvia, but rather Dira, his dosmetic helper. Apparently, this is the only way he gets to "see" Porky, and has not met her in person for a long time.

What’s more bizarre is that Porky’s Instagram account (@yummyhoneyporky) is now no longer following Ryan’s (@ryanxgo) - even though the dog is (or was) technically a shared one. Could this be a sign of tension or even animosity between Ryan and Sylvia?

Sylvia’s latest Instagram post is a sponsored one for toothpaste brand Colgate, which comes with a giveaway. The giveaway mechanics require participants to comment on the post with “a new activity you are challenging yourself to try out recently” and...let’s just say that not all comments have been the most positive.

Among the legitimate giveaway entries are jabs at Sylvia, with comments like “I am challenging myself to endure horrible bosses like you!!”. Oop.

These comments have all since been silently deleted - with Sylvia not addressing the issue - but above is a screenshot we managed to grab before they disappeared.

Share this with a fan of Night Owl Cinematics!

3
31 Jan
Nike Is Collaborating With Tiffany & Co. On A Limited Edition Pair Of Air Force 1 Sneakers