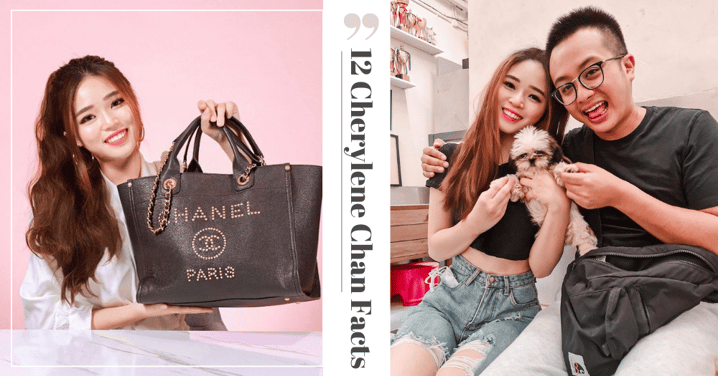 12 Facts About Cherylene Chan, The Young Influencer Who's Confirmed To Be NOC Ryan Tan's Girlfriend

6 months after his divorce from ex-wife Sylvia Chan in 2021, Ryan Tan of Night Owl Cinematics got a puppy with a 21-year-old influencer named Cherylene Chan. Fans were going wild with dating speculations - which have finally been confirmed by Cherylene herself more than a year since they arose.

In late October 2021, Cherylene make her status as Ryan's girlfriend public with an Instagram photo of the two of them hugging, and said that she decided to do so as the relationship had already been "revealed without [her] permission" through Sylvia's super viral 1-hour 40-minute interview with Xiaxue. However, judging by the sarcastic responses in the post, it looks like a ton of netizens aren't buying it, since the relationship had been made pretty obvious much earlier on.

Social media drama aside, here are 12 facts about Cherylene Chan so all you nosy fans can get to know a little bit more about her.

#1: The age gap between her and Ryan is more than a decade

When dating rumours surfaced, fans were particularly curious about Ryan and Cherylene's relationship - and not just because it happened after the former got out of a 10-year-long relationship. Many were quick to point out the large gap in years between the two, who were aged 32 and 21 respectively when they were first suspected of being in a relationship. That's a difference of over a decade - 11 years, to be exact.

#2: Her own line of PJs features original characters she designed herself

What started out as a side Instagram account for Cherylene's fun doodles and relatable comics - as a coping mechanism for pandemic-induced anxiety - has since birthed a whole lifestyle brand. The Oversized Club now not only features the talented lass' digital drawings, but also has satin pyjamas with cute prints for sale - you'll see them modelled by herself and her friends on the label's website.

Though the selection isn't large at present, one of her designs is already sold out and we're looking forward to more launches in due time!

#3: She helps out at her mum's flower boutique during the Mother's Day period

Cherylene doesn't often reveal much about her family, but she recently shared that she helps her mum out at her flower boutique every year during the Mother's Day period - one of the busiest times of the year. According to Cherylene, her mother spends "many sleepless nights just preparing for this period". For those who are interested, it's an XpressFlower outlet at the basement of Bedok Mall - head down during crunch time and you might just catch Cherylene hard at work, arranging a myriad of blooms into pretty bouquets!

In her “About Me” highlight reel on Instagram, Cherylene revealed a whole year ago that she was happily attached to an unspecified person - whom we now know is indeed Ryan. She says that she was lucky enough to meet him organically in a face-to-face setting, as dating apps really scare her.

These stories were posted around the same time Ryan and Cherylene uploaded their first few photos of Mantou Honey, their  shared puppy.

Despite her relationship with Ryan, Cherylene is not part of Night Owl Cinematics. Instead, she is signed to Titan Digital Media, owned by Singaporean YouTuber Jian Hao Tan.

In it, she’s part of the cast of Class T1T5, a series of listicle-style videos centred around a bunch of schoolkids played by fully-grown adults.

#6: With a 3.95 Poly GPA, she’s really smart and always scored well in school

Don't be too quick to brush Cherylene off as a “bimbo” just because she's an influencer. In fact, she's a smart cookie; She achieved an above-average score of 258 points for PSLE at Tao Nan School, and an L1R5 of 7 points for her “O” Levels at Tanjong Katong Girls’ School.

She then went on to obtain a Diploma in Marketing at Temasek Polytechnic, where she scored an almost-perfect GPA of 3.95 and made it to the Dean’s List more than once. On top of that, she was the Class President and bagged multiple awards for her various school projects.

Those grades are what some of us could only dream of during our school days. Looks like she isn't just a pretty face after all.

Cherylene is still in University, and is currently pursuing her Bachelor of Business Management degree at SMU. According to her LinkedIn page, she’s interested in the Marketing, Finance, and Management Consulting sectors - which means she may not choose to be a full-time influencer after she graduates.

#8: She had already started joining pageants in her early teens

Cherylene is no stranger to the spotlight. Even in her early teens, she had been joining pageants and beauty competitions.

At the tender age of 15 in 2014, she was one of the youngest finalists of Teenage Magazine’s “Teenage Mission: Gorgeous You” pageant, and bravely pitted herself against older adolescents in their late teens and early twenties. Above is her old photo submission for the pageant’s SelfieQueen Award.

The exposure she’s gained in the past has certainly done her good, judging from how confident and comfortable she appears to be on camera. And despite being thrust into the limelight from such a young age, it’s heartening to see how she’s still very much a humble “girl next door”.

#9: Hammy, her pet hamster, was well-pampered with a super aesthetically-pleasing tank

Cherylene isn't a first-time pet-owner. In 2019, she got a super cute Yellow Pudding Dwarf Hamster whom she named Hammy. Hammy was an extremely pampered little critter with an aesthetically-pleasing tank decorated with mini wooden houses and hidey holes, and Cherylene loved showering her with kisses and strokes.

For Hammy's first birthday, Cherylene even got her a little hamster cake made of seeds and grains.

Unfortunately, Hammy has since passed away. RIP, buddy.

#10: Her favourite food is fried chicken and she doesn’t diet or exercise

It’s no secret that Cherylene is a big foodie; She constantly posts Instagram Stories featuring the stuff she’s eating, and even has a whole highlight reel specially labelled “Food”.

Her favourite dish? Fried chicken. Her secret to staying slim? Do nothing.

“I gave up on any diet/workout LOL, food makes me too happy,” she says. Food makes us happy too, but if only we could all magically maintain a good figure like hers without having to put in any effort!

Other than being a talent who werks it for the camera, Cherylene also has good knowledge in what goes on in the backend of a social media company. Though she’s now most known as one of the faces of Titan, she also did a Digital Marketing internship with them for 8 months in 2017, where she did copywriting and met clients to propose marketing solutions for them.

In totality, she’s been with Titan since 2016. That’s a pretty long time for someone of her age!

#12: Along MBS is where she loves hanging out the most

Cherylene loves taking strolls along the Marina Bay Sands area, so that’s probably where you can catch her hanging out (or perhaps having a date?) on her free days. “The skyline is really beautiful and it uplifts my mood,” she shares.

Check out our other related articles: