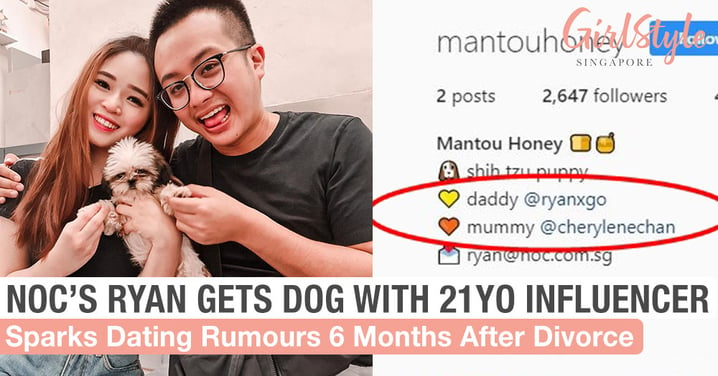 They say time heals all wounds, and it appears that time has done its magic for Ryan Tan, co-founder of Singaporean YouTube channel Night Owl Cinematics.

Ryan recently went through a tragic divorce from his ex-wife Sylvia Chan - the other co-founder founder of NOC - whom he had been with for exactly 10 years.

But 6 months after the divorce, 32-year-old Ryan has since found another love: His new puppy Mantou Honey. But that’s not all there is to this story, for this dog is also shared with 21-year-old influencer, Cherylene Chan - cue the dating rumours.

Read on to find out more about Ryan Tan and Cherylene Chan’s new dog!

Ryan and Cherylene’s new dog, Mantou Honey, is a Shih Tzu - just like Porky, the dog Ryan and his ex-wife Sylvia have together. Ever since their separation and divorce, Porky has been under “shared custody” between the two.

Mantou Honey is a fluffy ball of cuteness, and she’s super tiny right now, no bigger than a small stuffed toy in a claw machine!

And now, on to the juicy bit: Ryan’s suspected new relationship with Cherylene.

First of all, it’s common knowledge that most people don’t get dogs together, unless they’re immediate family or romantic partners.

Another tell-tale sign of a possible relationship? Ryan and Cherylene are listed as Mantou Honey’s Daddy and Mummy respectively on its Instagram profile.

On top of that, the newest post on the lil’ pupper’s Instagram account shows the pair holding her together, and they’re in very close proximity, with Ryan’s hand on Cherylene’s shoulder.

Of course, dating speculations surfaced almost immediately. Some fans also pointed out the stark 11-year age gap between 32-year-old Ryan and 21-year-old Cherylene. [Influencer Yan Kay Kay and her younger husband also have an 11-year age gap - read our article on them here.]

Both Ryan and Cherylene have posted photos taken with Mantou Honey on their respective Instagram accounts. Cherylene has also been spotted cuddling with Porky in more than a few of her own social media posts - is this a case of "love the man, love his dog"? 👀

Although Ryan and Cherylene have been seen hanging out, they haven’t exactly posted pictures of just the two of them together.

In August, both of them posted a group shot of them with some members of Night Owl Cinematics celebrating Ryan’s birthday. In that photo, Cherylene is sitting next to Ryan while carrying his precious Porky.

Cherylene is not part of NOC, and is instead signed to Jian Hao Tan’s company, Titan Digital Media.

Is love in the air? Well, neither Ryan or Cherylene have confirmed nor denied any of the dating rumours - but their fans sure are getting excited and anticipating more news. One thing’s for sure though - regardless of whether Ryan and Cherylene are together,  we’ve already fallen hard for Mantou Honey and can’t wait to see more photos and videos of her!

It looks like Mantou Honey and Porky might become playmates too - Ryan says he can’t wait for the two Shih Tzus to meet each other!

Read our other articles on celebrities and influencers:

3
31 Jan
Nike Is Collaborating With Tiffany & Co. On A Limited Edition Pair Of Air Force 1 Sneakers

10
03 Feb
Jelly Caricature: Get Cute Hand-Drawn Manga-Style Portraits Of Yourself In Singapore, Pets Are Also Welcome