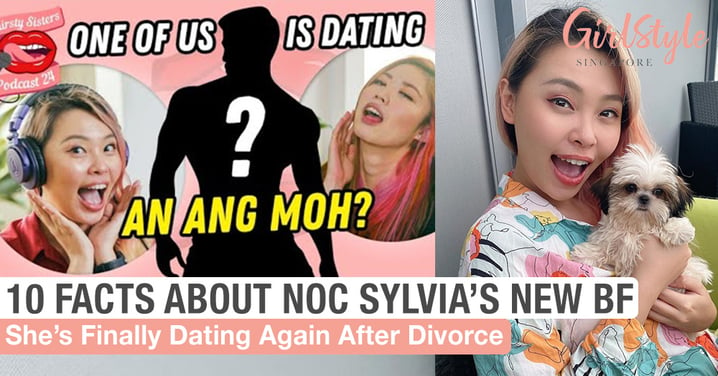 NOC’s Sylvia Is Dating Again After Divorce, Here Are 10 Things We Know About Her Mystery Man

Founders of Night Owl Cinematics, Ryan Tan and Sylvia Chan, have made multiple headlines this year - largely owing to their divorce after 10 years of marriage which got fans shocked and sobbing. A couple of months later, Ryan was the talk of the net for his rumoured new relationship with 21-year-old influencer Cherylene Chan, whom he recently got a new puppy with.

But what seems to have slipped under the radar is the fact that Sylvia has also found herself a new partner, revealed in a Thirsty Sisters video dated a couple of weeks back. At time of filming, she was hesitant to call it “love”, but it seems like she’s fallen hard for this guy - and after hearing her talk about him, he’s pretty much won us over too. Here are 10 things we know about Sylvia’s new boyfriend.

Following Sylvia’s split with Ryan, some fans had started to “ship” her with fellow Night Owl Cinematics mate, Aiken Chia, the producer of Food King. The two have been seen hanging out one-on-one on multiple occasions, and we must say, they do look good together and have great chemistry. However, if you’re hoping that sparks are flying between them, we gotta burst your bubble right here.

A clear indicator? Sylvia mentioned going for a meeting with Aiken while her partner stayed at home, so nope, he and Aiken aren’t the same person.

Plus, after acknowledging that working with Ryan indirectly affected their romantic relationship, it seems unlikely that Sylvia would choose to date another fellow YouTuber, especially one from NOC.

#2: He has already put his PS4 in Sylvia’s house - a sign of commitment?

A Sony PlayStation 4 has been cheekily referenced in the video a couple of times. This PS4, which belongs to Sylvia’s man, is now placed in her home, and he plays with it when he goes over.

That’s not all. Despite being a very “dollars and cents” kind of guy who doesn’t splash cash on impulse, he recently bought a $79.90 Ghost of Tsushima game to play on the console. Sounds like a sign of commitment, if you ask us!

As Sylvia’s Thirsty Sisters co-host Nina would put it: He’s committed to going over to her place often to play the PS4 because he has already bought it, and the fact that he is normally thrifty means that he must have put a lot of prior thought into the purchase decision.

#3: He called Sylvia “fat” but is actively helping her become healthier

Okay, before you guys start an angry uproar, this isn’t as bad as it sounds - Sylvia ain’t even mad about it. Well, she was at the start, and even said that she would eat more on purpose just to spite him for calling her fat. But later on, she realised that she indeed has very bad lifestyle habits that need to be changed. For example, she’ll sometimes go the whole day without food because of work, then binge eat at 11pm and naturally put on weight over time.

This observation on weight gain wasn’t made to make Sylvia feel bad about herself, but rather, was done with the purpose of helping her achieve better health. And he’s been a great motivator for her in this journey of fitness.

So far, they’ve been going for Muay Thai classes together, and he even bought a set of Muay Thai gloves for himself - a show of commitment not just to the sport but to her. Truth is, he doesn’t even really like Muay Thai and prefers to do HIIT at the gym, but because Sylvia only likes specific sports - martial arts being one of them - he’s willing to do it just for her. Aww.

“In [all] my life I’ve never seen you so motivated to exercise,” Nina quips.

The thumbnail of this Thirsty Sisters video teases us with huge wording that reads, “ONE OF US IS DATING AN ANG MOH?” But this was never addressed in the 37-minute video itself, so we’re still in the dark.

Some think that Sylvia is the one dating the White man, because they’re generally more outspoken, which her boyfriend seems to be. However, others suspect that Nina is the one who’s with a Caucasian, because she mentioned he has roommates - which means he is renting a place instead of staying with his parents unlike most unmarried Singaporean men.

Only time will tell, should either Sylvia or Nina choose to go public with their relationships. We’re already itching with excitement and can’t wait to “meet” these special guys through our screens!

#5: He really cares for Porky, the dog Sylvia shares with Ryan

It’s no secret that Porky the dog is a huge part of Sylvia’s life, and Sylvia’s boyfriend thoughtfully makes plans with Porky in mind.

Sylvia says that it’s quite troublesome to bring Porky for walks because she’s old and gets tired easily, so she needs to be put in a pram after a while. Other than that, she also needs a fan, water bottle, and can be quite grumpy. But this man remains unfazed by the hassle, and willingly plans for walks with Porky, even carrying the bulky pram up and down the stairs.

He isn’t merely doing this to be accommodating, for it seems that he truly loves and cares for Sylvia’s canine companion. He enjoys taking pictures of her and even takes the time to say bye to her each time he leaves Sylvia’s house - complete with cuddles and kisses.

You know you’ve struck gold when you find someone who loves the people - and pets - that are important to you.

#6: He’s a photography enthusiast, and a pretty skilled one at that

Sylvia reveals that a lot of the nice photos of Porky, as well as Yummy, her cat, have been snapped by her mystery man, who often doubles up as a dedicated pet photographer.

Well, pets aren’t the only subjects he’s passionate about photographing. Lately, Sylvia has also been posting shots of herself that were taken by him. While Sylvia’s own photos are usually more on the vibrant side, the pics by him tend to be colour edited with an artsy, muted tone similar to that created by a film camera.

These shots include one where Sylvia is seen working on her computer at a cafe. The caption reads: “Yesterday Mandy [the guy’s nickname] and I went to eat eclairs but I ended up working so he took some pics. I think these shots look nice even though I’m not posing or smiling 🙃”

Which leads us to the next point...

#7: He’s understanding about Sylvia’s work, even if it means she’s busy on weekends

One thing Sylvia really likes about her boyfriend is the fact that she doesn’t have to feel the need to babysit him. Even when she suddenly has to attend to work matters during their hangout time or on weekends, he never guilt trips her, and can even while away his time alone at her place, taking pictures of her pets or reading a book.

As fans would know, Sylvia is a very independent and career-minded woman, so we think it’s great that this guy respects what she does and can hold his own when she is busy. Referring to our previous point - the fact that he saw a great photo opportunity instead of sulking in a corner when she ended up doing work during their outing speaks volumes of his character.

Well-read, understanding, and an animal-lover? Tell us where we can find a man like that!

It is mentioned in the video that Sylvia’s anonymous boyfriend has more work-related experience than her because he’s older. The specific age gap has not been revealed, but we’re guessing that it’s significant enough if worthy of a mention. It's probably not as large as the age gap between Ryan and Cherylene, though.

This is another confirming factor that the man in question is not Aiken Chia, as Aiken is one year younger than Sylvia.

#9: He’s someone Sylvia might save from a fire pit over some of her friends

How do you know if you’re in love with someone? According to Sylvia, the answer lies in whether you’ll save them from a fire over your nearest and dearest. At present, Sylvia says she would still choose people like Nina, her brother Sikeen (pictured below), and her mum over her new squeeze, so he’s not on that tier yet. Understandably so, because they’ve only been dating for a while, but perhaps things will change over time?

She does, however, readily admit that she would pick her boyfriend over her soundman. When Nina points out that she’s known their soundman for a longer period of time that she’s known her guy, Sylvia exclaims humorously, “I’m sorry! I’m just a little hoe!” while fanning herself with a stack of papers. Whoops!

Sylvia mentions that she often goes to her new guy for work-related advice, and she loves that he gives his opinion in a very objective way. He doesn’t brush off her problems and simply go “there, there” when things get tough for her - he truly listens, gives her sound solutions and isn’t afraid to honestly express what he feels, even when he disagrees. This is something that Sylvia values a lot.

Nina seconds this, agreeing that he gives solid counsel. She commends him for taking the knowledge from his life and helping Sylvia apply it to her own situations, all with the genuine interest of wanting to understand the job she loves.

We don’t know if this will progress into a long-term relationship, or if this man is Sylvia’s true life-partner - at this point, Sylvia probably doesn’t even know the answer herself. But it’s nice to see her moving on and getting back in the game, and most importantly, she’s happy. We’re eagerly anticipating the day they become Instagram-official!

Check out the Thirsty Sisters video below:

Read our other related articles:

Share this with a friend who enjoys influencer news!