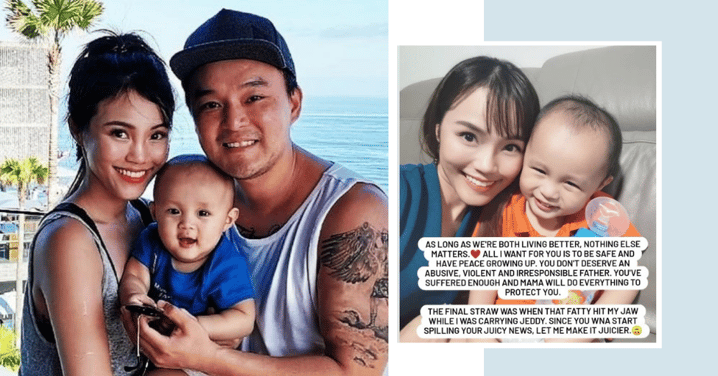 In what was probably one of the most bizarre divorce announcements we've seen so far, former child star Joshua Ang of "I Not Stupid" fame took to social media with an Oscar Wilde quote that read "Divorces are made in heaven", and asked fans to congratulate him while he celebrated with cake and wine. This was accompanied by a family photo with his now ex-wife's face blurred out, and his son's covered by a glittery "happy divorce" sticker.

The reason for the breakup was not specified, but the unconventionally happy tone of the announcement sure piqued everyone’s curiosity.

Turns out, there might be a lot more to this story than we originally thought. Posting her own set of Instagram Stories to talk about the divorce, Shannon Low, said ex-wife of Joshua, has spoken up with anecdotes detailing how she was a victim of domestic abuse - with the ex-actor allegedly hitting her and threatening her with a knife and electric drill at some points.

If you haven’t read about Joshua Ang and Shannon Low’s divorce, check out our first article on it here.

Read on to find out more about the domestic abuse allegations by Shannon Low, Joshua Ang’s ex-wife.

Shannon Low’s series of Instagram Stories starts off with a photo of herself with their son, Jedaiah, with a declaration stating that she would protect him at all costs. This is also when she reveals that Joshua Ang was allegedly abusive towards her, and even “hit [her] jaw while [she] was carrying Jeddy”.

“All I want is for you to be safe and have peace growing up. You don’t deserve an abusive, violent, and irresponsible father. You’ve suffered enough and Mama will do everything to protect you,” the 28-year-old writes.

She then accuses 31-year-old Joshua of self-victimising, and says that she has been “celebrating everyday ever since [she] kicked [him] out of the house.”

She goes on to say that Joshua destroyed many things in the family home in front of Jedaiah out of anger. When asked to help change Jedaiah’s shirt, Joshua reportedly wanted to rip the shirt apart.

According to her, he would not only skimp on child allowance, but also steal her money, and once ripped up her cash in a fit of rage. It is also said that he cut off the electricity and water supply in the house, which made it difficult for her to prepare milk for Jedaiah and change his diapers - although the reason for this was not stated.

Going into further detail, she claims that Joshua used a knife and electric drill to threaten her during quarrels, constantly switching on and off the latter to instill fear in her.

“He loves to pick fights out of nothing. When there’s peace at home, he has to wreak drama and chaos. He needs to feel powerful and in control, if not he will go bizarre.”

She also posted a photo of a smashed television, saying that he destroyed their TV screens multiple times such that they had to replace them repeatedly.

She claims that Joshua wiped out her phone, their CCTV, and chat history completely, hence the photograph of the broken TV - which she previously sent to her mother - is one of the few pieces of evidence she has left of the alleged domestic violence. It is said that her PPO (Personal Protection Order) failed to go through in court due to the lack of evidence.

Some netizens have posted comments saying that they’ve seen Joshua treating Shannon badly in public, yelling vulgarities at her and Jedaiah and causing a scene. On one occasion, he reportedly stormed off during a fight and left his wife and kid at the coffee shop without returning afterwards.

Shannon has reposted screenshots of those comments, confirming the incidents and thanking the posters for being witnesses.

It is not mentioned as to how long this alleged abuse has been going on for, but from Shannon’s posts, it is insinuated that it only started after marriage.

The ex-couple met some years ago when Joshua was taking a part-time degree and Shannon was an air stewardess. They got married in March 2018, and their son was born a couple of months later in August the same year.

It seems like Shannon’s neighbours have also not been spared from Joshua’s alleged anger outbursts and violent behaviour. She claims that he superglued the gate of their gate shut, cut their bicycle brakes, threw wet tissue paper into their home, and mocked them for being poor and uneducated.

“When he argued with them, and I pulled him back, he scolded me for siding the neighbours. And I have to suffer for the rest of the day just because I told him to leave others alone.”

Joshua has since unprivated his Instagram account to respond to Shannon’s accusations. “To me, there are two sides to a story, and [it] takes two hands to clap. I’m staying silent to the things she’s done, now. Because I don’t need these to be blown out of proportion.”

He shares that they are still going through court proceedings, but will be willing to publish his affidavit publicly in the future. He urges the public not to believe everything they read on the internet “before the truth is out”.

According to him, his post was merely to announce his divorce and “nothing more”, with the desire to settle the rest of the issue amicably. He says he is much happier now, and wishes for his ex-wife to find the same happiness.

He also claims that Shannon’s allegations are untrue, and will be taking legal action against her for what she has written about him.

In other news, it appears that Joshua has already found a new beau, whose identity has not been revealed. The screenshot below was reposted by Shannon, with her own commentary added in black text.

Whatever the truth of the matter, we hope that this messy situation will soon be resolved, and that both Joshua and Shannon will be able to move on with their separate lives peacefully. More importantly, we wish the best for baby Jedaiah as he grows up, and hope he will receive all the love and care he deserves even though his parents are no longer together.

Other articles on celebrities and influencers in Singapore: