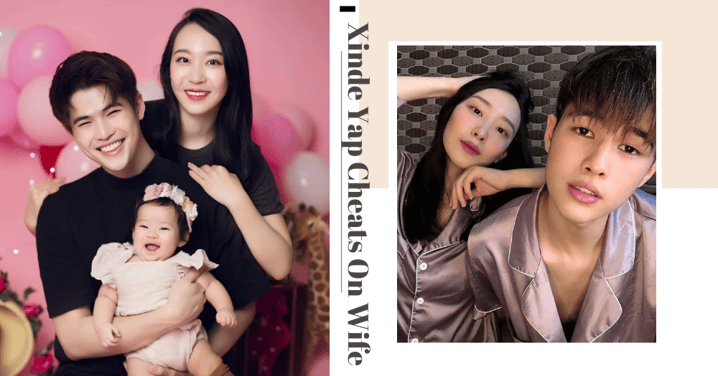 “Dee Kosh Boy” Xinde Yap Cheats On Wife After <1 Year Of Marriage, They Both Post About It On IG

Underneath picture-perfect appearances on social media, not everything may be as it seems. For 25-year-old Singaporean influencer Xinde Yap, who is more commonly known as one of the “Dee Kosh Boys”, his smiling face in happy family photos with 28-year-old wife Paix Wang and baby Bree has been hiding a secret - a secret of infidelity.

Just yesterday, on 13 December 2020, it has come to light that Xinde has been cheating on Paix. The couple who have been married for less than a year have taken to Instagram Stories to announce the incident, and talk about how they will be moving forward from here.

Read on to find out more about Xinde Yap’s cheating scandal.

According to the Instagram Story by Paix, Xinde’s wife, the cheating scandal was made known to her after she was informed by the third party’s boyfriend. The girl “invited [Xinde] to her house and initiated the physical cheating despite knowing Xinde is married [with] a newborn”.

Upon finding out that Paix was “supporting Xinde through every tough conversation along the way”, the girl went out of her way to feed her with “explicit details of the entire affair”. This included screenshots of their conversations and intimate details of them having sexual relations, including sleeping together.

“This has caused me stress, anxiety and affected my mental health significantly as a wife and new mother,” she shares in her no holds barred post.

She reveals that “monetary benefits” were offered in exchange of keeping the whole incident private, but has steadfastly come forward to say, “Our marriage is our own and I will not allow others to have power over my family”.

Xinde’s post corroborates this, saying, “While we wanted to settle this personal matter privately and as a family. I am cornered to speak about this publicly because there is someone who knows about this and is using my status as a public figure to try to extort from us $20k so that this wouldn't be exposed online."

He goes on to share that he was initially fearful of coming forward with the public confession, as naturally, this isn't something he is proud of. However, he has "decided that [he] will not fall for any form of intended 'blackmailing' and will own up to the mistakes [he has] made and face the consequences that follow".

Other than that, his post does not say much compared to Paix’s, other than the fact that he is remorseful and wishes to work on becoming a better person, both as a partner and a father.

Some might be surprised to hear that Paix has chosen to stand by Xinde and weather through this tough period together with him. Despite being angry, disappointed, and extremely heartbroken, she is willing to build her trust in Xinde once again and work on the marriage hand in hand as husband and wife - for the sake of her child and family.

“...I will be strong and stay with my husband in faith that he learns from his lessons”.

However, she has removed all posts related to Xinde from her Instagram account. Her profile bio mentioning her marriage status to him has also been deleted.

Paix has some words for the third party too: “It takes two hands to clap, to the girl who slept with my husband, I hope this serves as a reminder to not hastily and readily wreck someone else’s family”.

Xinde and Paix are newly married, having just tied the knot in January 2020 at Amara Sanctuary Resort Sentosa before COVID-19 restrictions kicked in. Bree was born a few months after that in May this year.

Simple math would tell you that the marriage was a shotgun one - which isn’t all that uncommon these days, with other high-profile influencers like Naomi Neo and Yan Kay Kay having gotten pregnant before marriage as well.

For now, we hope that Xinde and Paix can work together to absolve any issues in their marriage, and that little Bree will be able to grow up in a loving, stable home.