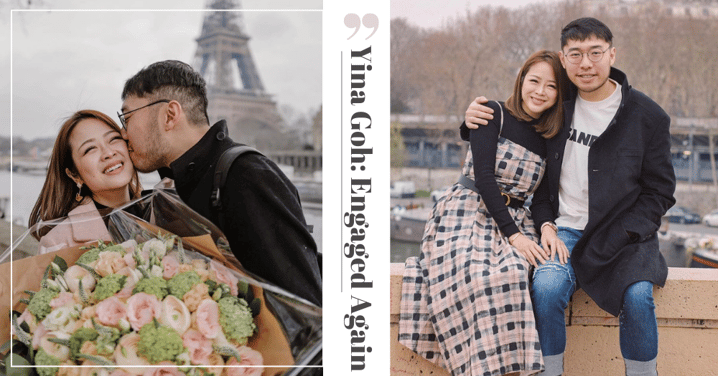 It seems like new love is in the air right now - especially so for those who were brave enough to open their hearts to second chances. Shortly after billionaire heiress Kim Lim got married in a lavish 22/2/22 wedding to her second husband, influencer Yina Goh, also the lady boss of local fashion store The Velvet Dolls, has also said “yes” to her beau - 5 years after a heart-wrenching divorce from her ex-partner of 10 years.

The 34-year-old social media content creator took to Instagram to share her joy, penning a couple of posts detailing the proposal and her thoughts on this new beginning.

Read on to find out more about Yina Goh getting engaged!

After a decade-long relationship with ex-husband Jerry Peh, which included around 2 years of marriage, Yina Goh very openly shared news of her separation and eventual divorce on her blog in 2017. Shortly after that, her now-boyfriend (or rather, fiancé!) Kenneth Loh entered her life, and changed it in a way she would never have imagined.

In one of her many Instagram posts regarding the happy occasion, Yina writes, “ Five years ago on the 6 of March 2017, my life got turned upside down. Five years later, it seems incredulous that we are still together, against all odds, against naysayers who gossiped or ridiculed or spread untruths. I was broken when he came to me and I found it hard to believe that I could find someone to love and to love me back.”

According to Yina, Kenneth simply told her back then that only time would tell if his feelings for her were genuine - and it looks like he’s successfully proven himself to her, judging from how elated she was to accept his proposal in beautiful Paris, with massive bouquet in hand.

Yina jokes that Kenneth was initially “so much more romantic and mushier” at the start of her relationship, and says that she’s been “scammed” on the romantic front. However, she also acknowledges how he loves her deeply and is always caring towards her.

“I think I have found my other half who loves me 100% for who I am. He makes me laugh, feeds me well, loves my dogs and parents as much [as] I do, and tucks me into bed. He has given me every confidence and freedom to be exactly who I am, to explore my potential to the fullest and I am a better person because of that.”

The post ends with a hopeful musing: “Will it last for the rest of our lifetimes? I can’t say for sure, but you would never know if you never tried, would you?”

Yina also uploaded a video of the proposal which happened on a waterfront bridge across from the Eiffel Tower. Part of the video caption reads, “Second chances don’t always come by in one lifetime, but when it does, one would be a fool to let it slip by 🤍” She also gushes about how her partner always takes it upon himself to give her nothing but the best, despite her never asking him for anything fancy or over-the-top.

She shares that she already knew that the proposal was coming sooner or later, but didn’t know when or where it would happen, so it still came as a surprise to her.

These special moments were professionally captured on camera because a photography company contacted Yina to sponsor a shoot for any of her upcoming vacations. Turns out, Kenneth “hijacked” this opportunity and roped in Yina’s friends to help pull this surprise off, with everyone waiting for the right chance at a suitable spot to carry out the big moment.

We also managed to catch a glimpse of Yina’s engagement ring from one of their selfies. It’s a simple sparkly solitaire that’s decently sized, but not overly opulent.

Congratulations to Yina and Kenneth! We look forward to hearing of their upcoming wedding plans and we’re sure the big day will be nothing short of magical. If anything, this just goes to show that second chances do exist, and we hope this inspires the rest of you to learn how to love again despite past hurts. ♡

More news on celebrities and influencers in Singapore: