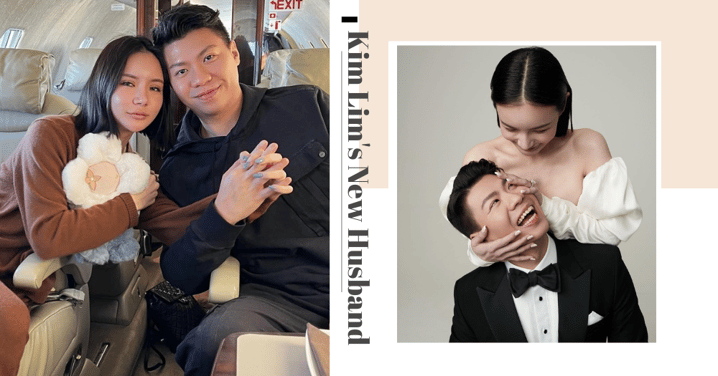 11 Things We Know About Billionaire Heiress Kim Lim’s New Mystery Husband, Whom She Just Married On 22/2/22

With 15,000 balloons, thousands of fresh flowers, and a tea ceremony involving a rare discontinued $10k note and way too many gold bangles to fit onto her two arms, billionaire heiress Kim Lim’s 22/2/22 wedding certainly was an opulent affair. This real-life Crazy Rich Asians wedding has been the talk of the town, and all the chatter surrounding the extravagance has almost detracted fans from another related subject: The groom himself.

So, who’s the happy husband? Other than the fact that he’s her second one - after her divorce from Kho Bin Kai, the father of her son Kyden - here are 11 things we know about Kim Lim’s new husband.

P.S.: Check out our previous article covering Kim Lim’s lavish 22/2/22 wedding if you missed it!

Read on to find out more about Kim Lim’s husband!

#1: Leslie Leow is his name

It wasn’t hard to find out Kim Lim’s new husband’s name once the congratulatory messages started pouring in from fellow famous friends on social media. We now know that this gentleman’s name is Leslie Leow - sometimes shortened to LL by those close to him.

Googling his name at this point will not give you any further information, apart from recent articles about the couple’s wedding.

From photos, one can already tell that Kim and Leslie are around the same age. Apparently, Leslie is currently 33 years old at time of writing, while Kim is 30 going on 31 this year, which means there’s a 2 to 3 year age gap between them.

#3: He comes from an IT background

According to multiple sources, Leslie comes from an IT background. It is not clear as to what his exact profession is, but we’re guessing he’s a businessman or entrepreneur or sorts - mainly because of the next point.

#4: Money is definitely on his side, considering that lavish $2m guo da li

Let’s play a game: Spot the happy couple amidst the mountain of guo da li gifts.

It’s hardly surprising that a billionaire’s daughter would marry a man of similar social standing, but we’re just blown away by just how wealthy Leslie seems to be - judging from the fact that the guo da li betrothal gifts he prepared for Kim and her family were valued at a whopping $2million. Yup, this guy’s got deep pockets for sure.

These gifts allegedly included 15 gold bars, 8 pairs of gold bangles and other numerous pieces of gold jewellery, 2 Hermès bags, gem-studded Jimmy Choo shoes, and traditional dried goods. There were also 188 fresh apples, rare vino, and 288 tiers of cakes to share with loved ones. And that’s just the tip of the iceberg.

Oh, and let’s not forget that the cost of Kim’s massive engagement ring is supposedly equivalent to that of a HDB flat’s. Putting things into perspective, a small 2-room flat in a non-mature estate should cost at least $90,000, while a 5-room in hot locations can go up to more than $700,000 on average

#5: His riches are allegedly self-made

Nothing is known so far about Leslie’s family background, but it has been said that his riches are self-made, which means he’s worked hard for everything he’s able to afford today. If reports from other media outlets are indeed true, we’re definitely curious as to how Leslie built his way up. Looking forward to hearing that success story of his someday!

#6: @waleoweh is his Instagram handle, but he stays low-key on social media

Scroll through Kim’s Instagram profile and you’ll see Leslie being tagged with @waleoweh as his handle - with his surname Leow as part of a pun on the Singlish phrase, “walao eh”. You won’t be able to learn anything new about him from there though - his profile is locked away from prying eyes.

Judging from what looks to be an ancient profile photo and a low number of posts, it seems that this guy isn’t one for social media, in contrast to his wife who’s comfortable basking in the limelight both online and offline.

The only way you’ll get to see glimpses of Leslie on social media is through Kim’s own accounts, and occasionally, via Instagram Stories posted by Kim’s close friends including Xiaxue (Wendy Cheng).

#7: It took him mere months of dating Kim before proposing, but they’ve been friends for years

One could arguably say that Kim and Leslie’s love story started out as a whirlwind romance - the couple had only dated for mere months before the latter got down on one knee to propose. But it’s worth noting that they’ve actually been friends with each other for years, so it’s not like they parachuted straight from being strangers to being engaged.

#8: Expect cheeky jokes when hanging out with him

With Leslie remaining low-key out of the media spotlight, it’s easy to assume that he’s a quiet, unassuming guy. That may be so for those who don’t know him, but it seems like he’s got quite a few cheeky jokes up his sleeve for those who are part of his inner circle. As captured on Xiaxue’s Instagram Stories, Leslie “made a dirty joke about the tangyuan” during his wedding tea ceremony with Kim.

While the sound was muted to keep things PG13, we’ll make a wild guess that this involved a pun about “balls”. 🤣

#9: Hypebeast fashion is his go-to style

It doesn’t matter whether he’s traipsing the streets of Paris or chilling out back home in sunny Singapore. At any given time, you’ll probably find Leslie decked out head to toe in Hypebeast-style streetwear, which he pulls off perfectly. Think hoodies or oversized shirts worn with sweatpants or casual three quarter pants, paired with chunky sneakers for that effortlessly cool yet laid-back vibe.

Probably one of the only few times we haven’t seen him wearing such togs was during his wedding, where he showed up looking sharp in various suit sets.

#10: He remains patient despite Kim’s personality disorder & gives in to her quirky requests

A week after a deluge of Instagram posts showing off her new engagement on 30 September 2021, Kim mysteriously deleted all content related to the event. On 7 October, she posted a cryptic Instagram Story with text reading, “It just didn't work out", followed by another one saying "Hurt inside from my present & past". This, naturally,  lead to speculations of a breakup.

However, shortly after, Kim re-uploaded one of her proposal shots, addressing the situation and candidly revealing her personality disorder.

“Guys. We are ok don’t worry. This is for life. As you all know I’m just being drama and reacting rashly to situations at times. Part of my personality disorder but I am getting better. Just saw my psychiatrist! So don’t worry ok everyone. Haha thank you to most of you who are always caring for me. And sorry to worry you guys ❤️❤️❤️❤️ love you all.”

She also posted another photo of Leslie wrapping her in an embrace, and dedicated it to him with a caption expressing her gratefulness for how patient he’s been with her: “❤️ thank you for being sooo patient with me and tahan-ing my siaonesss. I will try to change 😂😇😅”

From this, we can gather than Leslie is an extremely understanding and caring person who treats his partner well. Good for you, Kim!

It seems like he’s also willing to give in to Kim’s quirky requests, such as dressing up in Christmassy pyjamas together - even if it’s not necessarily his kind of thing.

“❤️😂😂🤣🤣🤣 kena forced to be Christmas-y with me 🤣 LOVE YOU HUSBAND. Thank you for always being here for me whatever the situation 🤪 you so funny ha ha ❤️❤️❤️❤️❤️❤️”

We all love a guy who’s a good sport and doesn’t mind looking silly for the sake of putting a smile on his girl’s face!

#11: Like Kim, he makes sure to give back to society

Kim is someone who regularly gives back to society by doing volunteer work or donating to charity organisations. Even her wedding flowers were given away to an old folks’ home after the grand event, so as to bring some joy to the residents’ day.

Leslie is also on board with this philanthropic spirit, and takes part in such charity efforts alongside her. During Christmas last year, they personally visited a children’s home and a family service centre to hand out gifts to beneficiaries.

Share this with a friend who’s been curious about Kim Lim’s new husband!