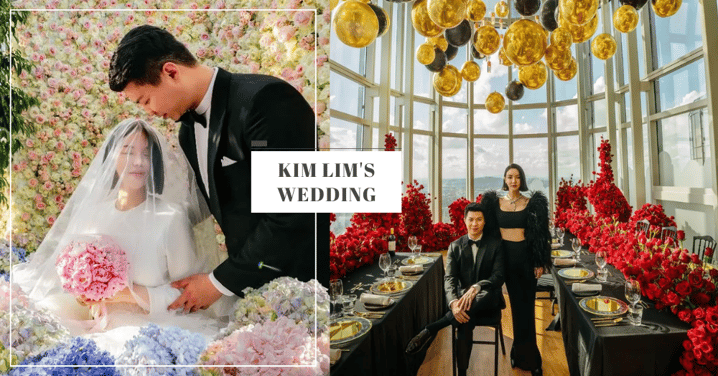 Billionaire heiress Kim Lim, 30-year-old daughter of business tycoon Peter Lim, has found love again since a self-initiated divorce that left her as a single mum. A week after a $2 million guo da li ceremony, she married her new beau Leslie Leow on the 22nd of February 2022 (22/2/22) - and it was nothing short of lavish. Here’s a glimpse of all the grandeur.

The morning of the special event first began with a home solemnisation in Kim’s own abode, a two-storey penthouse unit along Balmoral. Decorated with thousands and thousands of flowers, her rooftop patio - where the ceremony was held - was transformed into a fairytale-like garden, and even included a floral wall as a photo backdrop. And yes, all these were fresh blooms - so you can only imagine how much everything must have cost.

Despite how over-the-top the entire floral setup was, Kim’s own hand bouquet was simple in comparison, and her white wedding outfit followed suit as well. This was a two-piece from Australian designer boutique Chosen by KYHA - a non-embellished long-sleeved top paired with a tiered skirt.

It is worth noting that the flowers did not go to waste - according to Kim’s close friend, social media queen Xiaxue, the flowers were later on wrapped up and sent off to an old folks’ home to bring some joy to the residents’ lives.

Next came the tea ceremony, where the couple changed into their custom-made traditional Chinese kuas. Layers and layers of gold jewellery were piled on Kim during this portion, and this included 2 gold tiaras worn at the same time, a necklace with 3 gold pigs, and 8 pairs of thick gold bangles. Due to limited arm space, quite a number of the 16 bangles were threaded onto a red ribbon and hung on Kim’s neck instead. Must’ve been heavy!

But probably the best, and biggest gift of all was a $10,000 note from her father Peter Lim - something many of us can only dream of having in our hands! This denomination of money has been discontinued since 2014, and is thus extremely rare.

Accompanying this gift was a message reading, “This special note has followed Pa for a very long time and overcame many difficult years. Treasure it. All the best wishes for the future.”

Kim Lim’s wedding dinner in a sky loft with 15,000 balloons

The next half of the event was a dinner at sky loft 1-Atico, located on the 55th floor of ION Orchard. As if the views from the floor-to-ceiling windows weren’t breathtaking enough, the entire venue was filled with a whopping 15,000 black and gold balloons - and a whole lot more of fresh flowers - in a classy Great Gatsby-esque theme.

The couple showed up looking sharp in matching black outfits. Kim wore 2 different black two-piece outfits during this segment, breaking the tradition of the usual white or pastel-toned gowns. The first was a top with long feathery sleeves, worn with a long body-hugging skirt. The second was also long-sleeved, in a gauzy material, matched with a floor-length tutu-like skirt with multiple tiered layers.

Some of us get 4 manicures in a year. Kim Lim, however, received the ultimate princess treatment, getting pampered with 4 different sets of nail designs within the same day. Each was specially customised to match her various outfits.

These included a white French manicure, bold red to match the kua, a white gradient design with glitter tips, and black encrusted with sparkly gemstones to match the sophisticated Great Gatsby dinner theme.

…But this is not her “actual” wedding

Despite all the fanfare, Kim still isn’t done with her wedding celebrations. In her latest Instagram post, she wrote a caption thanking everyone for their well-wishes and expressing gratitude to the team of vendors who made the event possible. “Can’t wait for the actual one 😆”, part of the caption reads.

If this was just the pre-wedding party, we can’t imagine how opulent the real thing will be. Can’t wait to see how that’ll play out!