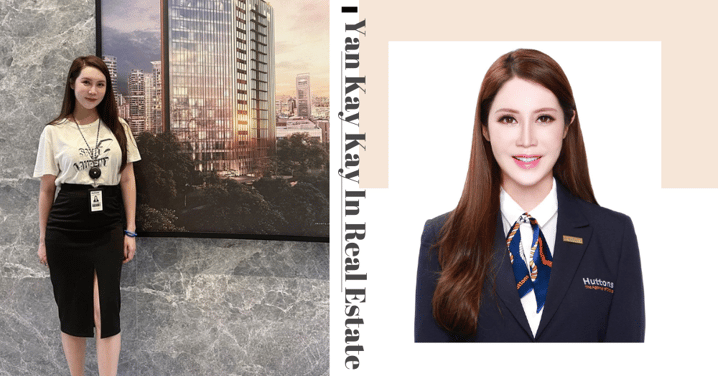 Yan Kay Kay Is Now A Property Agent Like Her Husband, Did Viewings In Heels 5 Weeks Post-Childbirth

It seems like nothing can stop ex-model Yan Kay Kay (Yan Qi Hua), not even childbirth. Despite having just welcomed her daughter into the world 5 weeks ago - her second child with husband Brandoh Loh who’s 11 years younger than her - the influencer-entrepreneur is now up on her feet, in heels no less, doing viewings as a property agent.

Yup, other than co-helming Supersenji, a distributor of beauty and personal care products, as well as Orient Ocean, an F&B retailer, the soon-to-be 40-year-old has followed her 28-year-old husband’s footsteps and made a leap into the real estate industry.

Read on to find out more about Yan Kay Kay’s career switch!

On top of it being the year-end holiday season right now, Yan Kay Kay is supposed to be on maternity leave but that seems to be inconsequential to her. The yummy mummy has already resumed work, going for viewings on Boxing Day, as she revealed to followers via a string of Instagram Stories.

This started off with a video of her in a car driven by Brandon, with the caption: “Other people open presents on Boxing Day. We open showflats”.

Kay Kay then showed off her choice of footwear for the day’s appointments - a pair of black 120mm pointed toe Louboutin stilettos. That’s almost 5 inches! While doing so, she also gave us a subtle glimpse of her silver Chanel lanyard keychain, from which her estate agent card was hanging.

Turns out, Brandon was the one who made her wear these high heels, and from what we gather from her posts - in which she refers to him as “boss” - he might just be her supervisor.

Too close for comfort? Well, the duo already have two successful joint businesses between them, so working together probably shouldn’t pose any issues. If anything, we’re just a little surprised that their company allowed for this arrangement, seeing as most other organisations would consider it a conflict of interest.

The couple are currently with Huttons Asia, which largely deals with luxury properties. Brandon has been with the company for quite a while now since early 2019, and even emerged Platinum Champion a mere couple of months after joining, where he scored a 6-figure sales commission.

They’re clearly the epitome of a power couple. We’d say they’re #relationshipgoals even, despite the naysayers being skeptical about the large age gap between the two.

Morenews on local celebrities and influencers: