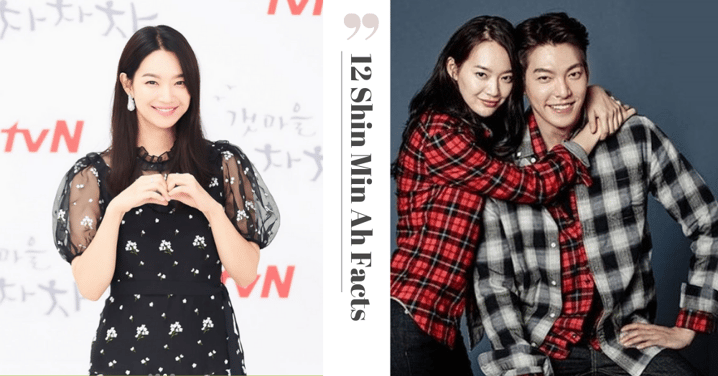 If you're an ardent fan of Kim Seon Ho or K-dramas, chances are that you've already seen Hometown Cha-Cha-Cha. While most of us were drawn to the series by Seon Ho, his leading lady Shin Min Ah AKA Yoon Hye Jin, has also captured the hearts of fans with her emotive acting skills and adorable dimples.

Here are 12 facts about Shin Min Ah, the lead actress in Netflix's hottest K-drama "Hometown Cha-Cha-Cha" who plays an ambitious yet affable dentist.

Read on to find out more about Shin Min Ah AKA Yoon Hye Jin in Netflix's K-drama "Hometown Cha-Cha-Cha"!

Shortly after collaborating on a 2015 shoot for fashion brand Giordano, Shin Min Ah and Kim Woo Bin confirmed that they were dating and their relationship has been going strong for the past 7-years!

Min Ah also proved to be a loving partner when she declined work arrangements for 2 years to care for Woo Bin after he was diagnosed with nasopharyngeal cancer in 2017. In recent announcements, the couple is set to star in the upcoming k-drama "Our Blues". Fans have also been speculating that wedding bells might soon be ringing for the lovely couple. Let's keep our fingers crossed!

#3 Started modelling at the tender age of 14

At the tender age of 14, Min Ah had graced the cover of Kiki Magazine. However, the 37-year-old later revealed during an episode of Korean variety show "You Quiz on the Block" that she regretted debuting at such a young age as she "didn’t have a school life like everyone else".

#4 Made her acting debut three years later at age 17

3 years after she started modelling, Min Ah made her debut as an actress with a supporting role in popular melodrama, Beautiful Days. She has since starred in 15 movies, 10 dramas and bagged multiple awards including the New Star Award for her outstanding performance in K-drama Punch.

#6 Dubbed the "CF Queen" of Korea, Min Ah's one of the most sought-after commercial models in her country

For the uninitiated, "CF Queen" means commercial film queen. Min Ah's appearances in countless commercials are proof that she's one of the most sought-after commercial models in her country.

#7 A softie at heart, Min Ah shares quite a few traits with her Hometown Cha-Cha-Cha character

In an interview with Forbes, Min Ah revealed that while she isn't as straightforward as her character, she'd like to think that she's "90% similar" to Hye Jin in terms of how she shows kindness to those around her. Apart from relating deeply to her character, the actress also admitted that her curiosity towards her co-star Kim Seon Ho played a part in her acceptance of her role in Hometown Cha-Cha-Cha.

Despite being an established actress who's bagged multiple awards, Min Ah still believes in devoting herself fully to her onscreen character and spends a considerable amount of time on character research before filming begins. To better portray Hye Jin, Min Ah went on dental visits to observe dentists and patients. She had also learned to dive for her role in the psychological film "Diva" which led to her nomination of Best Leading Actress at the 41st Blue Dragon Film Awards.

Apart from solid acting skills, the actress also contributed her angelic voice to the recording of various OSTs such as Punch's "Oppa, I Love You", and My Girlfriend Is A Gumiho's "Sha La La".

It seems like our beloved actress has a passion for writing too! After her visit to France in 2008, the actress went on to publish a book the following year titled "Shin Min Ah’s French Diary", documenting her travel experiences.

Aside from being in love with her boyfriend Woo Bin, Min Ah's also enamoured with her toy poodle, Woody. She shares their cute interactions on Instagram and fans love it!

#12 As a philanthropist, she supports charities such as Fruit of Love, Good Friends, and Hallym Burn Foundation

Min Ah continues to win the hearts of fans not only with her beauty, multiple talents but also with her philanthropic deeds. It was reported that the actress has been making constant donations since 2009 to various charities such as Fruit of Love, Good Friends, and Hallym Burn Foundation. She would also make personal visits to hospitals, providing comfort to patients with burn injuries and their families.

Share this article with a fan of Hometown Cha-Cha-Cha!