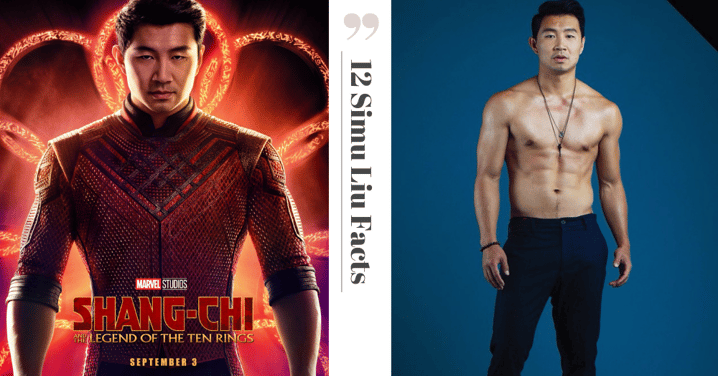 Ardent fans of the Canadian sitcom Kim Convenience might recall Simu Liu as the hot Korean oppa who played Jung - an ex-juvie who works at Handy Car Rental and gradually mends the strained relationship with his father as the series unfolded. This September, the 32-year-old Canadian actor will be hitting the big screens as Marvel’s first Asian superhero Shang-Chi in its latest blockbuster – “Shang Chi and the Legend of the Ten Rings".

Here are 12 facts about Simu Liu, who shot to fame after landing his titular role.

Keep reading to find out more about Simu Liu aka Marvel’s Shang-Chi!

#1: He used to be an accountant at a top firm, but hated it

PLEASE STOP USING MY FACE FOR YOUR ACCOUNTING MATERIALS!!

(That’s not to say that accounting is not a perfectly valid pursuit for certain people!! Live yo best life!!) pic.twitter.com/lhqr7Y6YZ8

After graduating from the University of Western Ontario with a degree in business, Simu landed himself a job at a top accounting firm where he worked for 8 months before he was laid off.

In a Tweet, Simu lamented that he was underperforming and that he “hated every minute of every day at work” which he accompanied with a picture of an accounting textbook with his face slapped on the cover. Wait, what?

This brings us to the next point...

Me laughing at the people who thought we’d flop pic.twitter.com/7UoLqRXlCJ

Turns out, Simu modelled for iStock (which ironically in his case, one of the images was used as the cover of an accounting book).

The actor revealed that he took on a US$120 (S$160) for a stock photo modeling gig as he needed to pay off his credit card debt.

Apart from accounting textbooks, other photos of the 32-year-old that were taken back in 2014 during one particular stock photo shoot are still making their appearance on posters, ads and storefronts till date.

A Star Was Not Born
(but I gave it a good shot) pic.twitter.com/ITqioonoJq

Apparently, Simu’s love for music goes way back to when he was in middle school.
In an interview with Entertainment Weekly, the actor revealed that he was in a former boy band with 3 other friends in middle school who coincidentally had names starting with L, hence the name of the boy band.

#4: Crazy Rich Asians’ lead role could almost have gone to him

If it wasn’t for 4 failed auditions, the role of Nick Young (which eventually went to Henry Golding) could’ve been Simu’s.

While he wasn’t successful, Simu had expressed interest in the role of Carlton Bao – the troublesome half-brother of Rachel Chu – who will be making his appearance in the sequel of “Crazy Rich Asians”.

#5: His tumultuous childhood and Hollywood breakthrough were published in an autobiography

Simu Liu was born in Harbin, China and was left under the care of his grandparents during his toddler years before joining his immigrant parents in Mississauga, Ontario at the age of 5.

In an article he penned for Variety, Simu recounted the blatant disrespect his parents faced on the daily. He also expressed his disappointment to bystanders who turned a blind eye then.

In June 2021, Simu published his memoir – We Were Dreamers: An Immigrant Superhero Origin Story. He recounts his complicated relationship with his parents growing up, his determination to follow his dream, and his gratitude for his parents’ sacrifices, love, and life lessons.

The actor also started an Ask Me Anything (AMA) Reddit thread to allow his fans to get to know him on a more personal level.

In his response to a Redditor, Simu revealed that he’s a huge fan of country music and that he loved Taylor Swift’s “early stuff” such as Our Song.

#7: Twitter played a part in landing him his Shang-Chi role

Hey @Marvel, great job with Cpt America and Thor. Now how about an Asian American hero?

Representation (or rather the lack of) in Hollywood was an issue that Simu Liu felt strongly about. In 2014, Simu sent a congratulatory tweet to Marvel, praising them for yet another roaring box office for Captain America: The Winter Soldier. He ended his tweet with an appeal to Marvel for an Asian American superhero.

OK @Marvel, are we gonna talk or what #ShangChi

Despite being ignored the first time, Simu followed up with a cheeky tweet in 2018 which fans believe helped him bag the role of Shang-Chi.

Turns out, dreams do come true.

#8: No stunt doubles were used during his filming of Shang-Chi

In an interview with Insider, fight coordinator Andy Cheng revealed that Simu did not use a stunt double during the filming of “Shang-Chi and the Legend of the Ten Rings”. Simu was also commended for his talent and professionalism.

In his AMA Reddit thread, he revealed that he used to work as a substitute stuntman for actual stuntmen and that he almost broke his neck while attempting a backflip stunt in his backyard.

Leading up to the filming of the movie, Simu recalled setting aside an extra 5-6 hours on weekdays to train with the stunt team, in addition to the bodybuilding and conditioning routine he was on.

#9: He loves anime and his favourite character is Pikachu

Imma let you finish but... Pikachu is the most recognizable anime character of ALL TIME!#robbed https://t.co/irJeR2NCNi

When it was announced that Goku (from the DragonBall series) was chosen as the ambassador of the 2020 Tokyo Olympics, die-hard pokemon fan Simu had differing views.

The anime fanatic also revealed on Reddit that his favourite anime series include Bleach and Dragonball Z but they come second to Pokemon and Digimon.

#10: He's got solid vocal chops and does covers with his own guitar and piano

Evidently, Simu has a burning passion for singing (and damn, he’s actually really good at it). Trust us, you’ll definitely swoon over his baritone voice and mad guitar skills.

-"I Just Can't Wait to Be King" from 'The Lion King' ✅
-"All of Me" by John Legend ✅
-"A Whole New World" from 'Aladdin' ✅ #ShangChi star @SimuLiu proves he's got the vocal chops to rock any karaoke night pic.twitter.com/leRqBGwegI

In an interview with The Hollywood Reporter, Simu joked that he would like Shang-Chi to be a musical.

#11: The short film he wrote was nominated for the 13th annual NBCUniversal Short Film Festival

Aside from working as an actor, Simu takes interest in screenplay writing and production. Alongside co-star Tina Jung, he wrote and produced “Meeting Mommy”, which was later nominated for the 13th annual NBCUniversal Short Film Festival.

#12: As the UNICEF Canada Ambassador, giving back is important to him

Nothing’s more attractive than a man with a heart of gold. A firm believer in giving back to society and advocating for causes, Simu’s an avid philanthropist and volunteer for multiple charities.  Last year, the actor announced that he has taken on the role of UNICEF Canada Ambassador.

In January, Simu partnered with non-profit Canadian Chinese Youth Athletic Association to surprise a family who'd recently lost their mom to cancer. He showed up at their place with an intricately wrapped PS5 and even pledged to donate CA$1000 (S$1059) to the Joanna Duong Chang Memorial Foundation.

A couple of months later, Simu starred in a video for #StayStrongTogether campaign - a partnership between the California Milk Processor Board and No Kid Hungry - which aims to provide up to 1 million meals to kids in need throughout California. This heartthrob’s not only a superhero in the Marvel universe but in ours too!