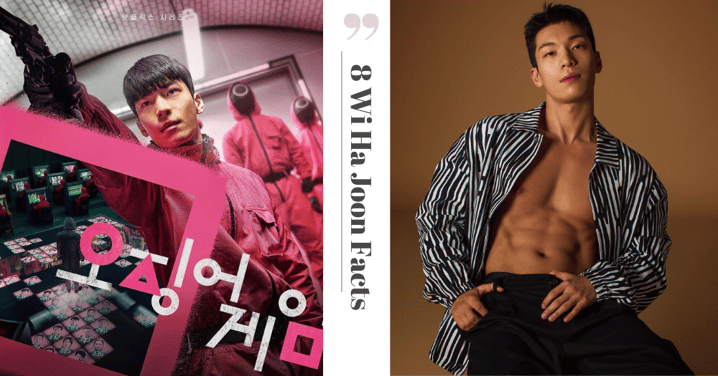 Who else was enamored with Hwang Jun Ho AKA the charming police officer from Netflix's latest Korean thriller - Squid Game? Since the release of the 9-part series, Wi Ha Joon AKA Hwang Jun Ho has dazzled fans from around the globe with his charming looks and impeccable acting skills.

Read on to find out about Wi Ha Joon AKA the hot police officer who inflitrated the game in Netflix's Squid Game!

#1 His character wasn't in the initial script for Squid Game

In an interview with Netflix, Squid Game's director Hwang Dong Hyuk revealed that Squid Game was orginally written to be filmed as a movie and that the character Hwang Jun Ho didn't exist due to the lack of screen time. But when Squid Game was turned into a series, Dong Hyuk decided to write a storyline for Hwang Jun Ho which eventually turned out to be a great move as he described the police officer as "a character that sees the essence of the game".

With such chiseled abs, it's no secret that Ha Joon's a gym junkie. But the 30-year-old actor wants to take his love for gymming to higher grounds. During a press conference, Ha Joon revealed that he would love to open a gym with the grand prize of 45.6 billion won (~$SGD 52 million) should he win Squid Game.

Ha Joon is managed by MSteam Entertainment, the same agency who manages famous Korean artistes such as Son Ye Jin who played Yoon Se-Ri in hit drama series Crash Landing On You. He's also known in the industry as Son Ye Jin’s "younger brother", which he deems to be a great honour.

#4 Was nominated for 3 "Best New Actor" awards after his groundbreaking performance in Gonjiam: Haunted Asylum

We've heard of celebrities having stage names and turns out, Wi Ha Joon debuted with one too! It was reported that he used a stage name as his agency told him that the meaning of his birth name was unfavourable.

Ha Joon has an adorable niece whom he refers to as his "princess". The 30-year-old often shares clips of him spending time with his niece. This one shows them having a whale of a time at a park!

#7 He can seranade you with his sweet, euphonious voice

Apart from having great acting skills, Ha Joon also has a sweet, euphonious voice which will leave you swooning over him even more than before. Here's a clip of him singing the OST "Maybe it's too late" of Matrimonial Chaos, a 2018 television series which he starred in.

#8 Flaunted his moves when he danced to TWICE's Cheer-Up

If he isn't already amazing enough, the multi-talented actor continues to wow us with his amazing dancing skills. Fans have dugged up a 2016 clip of him dancing to TWICE's Cheer-Up. Turns out, he was part of the dance team in middle and high school!