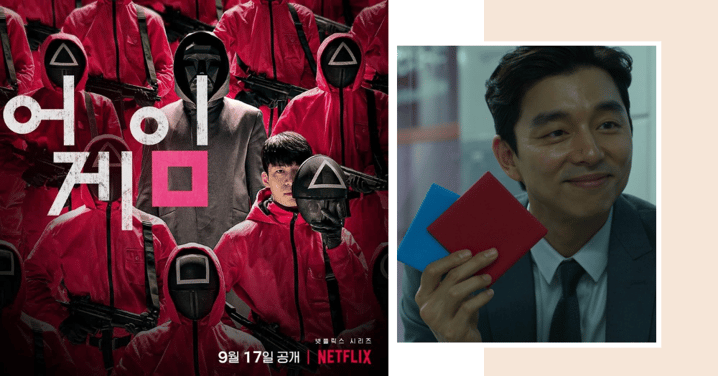 The Korean film and tv industry is on a roll! Every few months or so, there'll be a new craze for a Korean tv show or movie that becomes virtually unavoidable like Train to Busan and Crash Landing On You.

Recently, a fan-theory about the guards in red jumpsuits went viral on Tiktok. It seems pretty plausible and would explain who the guards are as well as a possible plot for a season 2.

Keep reading to find out more about the fan theory. Warning, spoilers ahead!

Who are the Squid Game workers in red jumpsuits?

While the players of Squid Game and one of its founders are known to the audience, the other people involved in it remain a mystery.

One peculiar group of people that doesn't fit in with the villain archetype is the staff members in red jumpsuits. While they're the supposed bad guys in the story, they're not living it up like the VIPs. On the contrary, their situation is less than ideal.

Episode 3, in particular, reveals that the lowest ranked workers with circle masks are oddly hyper-controlled.

Disguised as a circle-masked worker, police officer Hwang Jun-ho heads back to his room which resembles a prison cell. Meals are served through a small slot in a hole in the door, much like a solitary confinement cell, and there's a camera watching him 24/7.

We also learn that workers are not allowed to leave the room or speak without permission. In the morning, a timer counts down from 10 minutes as workers emerge from their rooms in unison and silence.

Another thing we noticed is that the chirpy announcer that introduces each of the six game to the players sounds pretty similar to the one that give the workers instructions.

The show also implies that the staff of all ranks, including the ones with triangle and square masks, are dispensable. Later in episode 3, a square mask staff member exposes his identity, and despite his seemingly high status, he's casually finished off by the Front Man. In episode 5, a soldier with a triangle mask tries to reason with the doctor, saying that no one would care if a soldier went missing.

This shot where the workers walk through the pastel stairway also mirrors that of the players heading to and from the games.

This all makes sense if you buy into a theory by Squid Game fans like @lucy.what1 on Tiktok that explains who the masked staff members are.

In episode 1, the game recruiter played by Gong Yoo plays a game of ddakji with Seong Gi-hun at a train station. When asked to pick a colour, he chose blue. Strangely, the montage played by the staff shows that Cho Sang-woo and several other players also chose blue. None of the players shown had picked red!

And what's also red and blue? The uniforms worn by the players and staff! Players are dressed in green-blue tracksuits while workers are in pinkish red jumpsuits.

So the theory is: the workers were in the same situation as the players - in debt or a serious financial rut and approached by a recruiter to play ddakji. Had the characters picked the red card instead of the blue card, they would've been offered a job as a worker in the game rather than a player.

It would explain how a survival game of this nature and scale could be carried out in secrecy for decades, as the game masters have power and leverage over the workers.

That said, this theory hasn't been confirmed and there's room for skepticism. The ratio of players and staff members isn't 50/50, as it should be if people were allowed to choose either colour. Additionally, the players' jumpsuits are a teal that some see more as green than blue!

This red & blue theory also led fans to speculate that perhaps Seong Gi-hun's strategy for taking down the entire operation is to join the game again but as a worker!

What do you think of this theory?

If you're looking for more shows after binging Squid Game, check out these latest Korean dramas:

4
14 Aug
Versailles De Flore: Hidden Gem In Chiang Mai, Thailand Is A Cafe That Looks Like A Renaissance Castle

9
15 Aug
7 Reasons Why Chez Vous: HideAway Is By Far, Our Favourite Hair Salon in Singapore