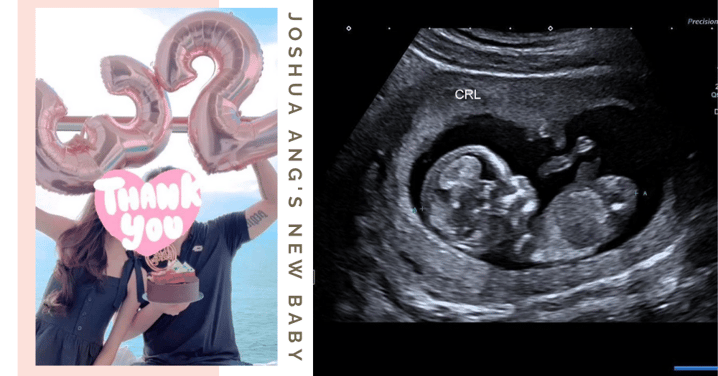 Following a messy divorce from his ex-wife Shannon Low - which involved allegations of him causing physical hurt and having serious anger issues - Singaporean ex-actor Joshua Ang is now celebrating new life. Not just his new life as a freshly divorced 32-year-old, but the new life of his second child, this time with a new partner.

Read on to find out more about Joshua Ang’s new girlfriend and second child!

If you missed the previous saga featuring Joshua Ang and Shannon Low, here’s a quick summary: The ex-actor of “I Not Stupid” fame posted a divorce announcement in December last year featuring an old photo feautring his ex-wife, with a "Happy Divorce" sticker covering the sonogram of their son. There was also a caption with the Oscar Wilde quote, “Divorces are made in Heaven”, with him telling fans to congratulate him instead of feeling sad.

Soon after, Shannon created her own string of social media posts, citing that the reason for the divorce was because Joshua had serious anger issues and allegedly lashed out at her by smashing items in their home, yelling vulgarities at her in public, and even threatening her with a drill. Joshua claimed that her allegations were all untrue, and said that he would be suing her for libel.

Since then, the ex-couple who first married in 2018 have kept mum on the situation, and it is unclear as to whether Joshua actually took legal action against Shannon in the end. However, the divorce should have been finalised in March this year, and based on Joshua and Shannon’s respective Instagram updates, it appears that they have won joint custody of their son Jedaiah Leonhart - with him spending weekends at Joshua’s, and the rest of his time with Shannon.

Now, it seems that Joshua is set to become a father for the second time. Just yesterday, on National Day 2021, he posted an image of an ultrasonogram on his Instagram account with the simple caption “See you soon, Love 💕”, which garnered multiple congratulatory messages.

One can only assume that this child was fathered with his new girlfriend, whom he was already with when the initial divorce announcements were first posted. While Joshua’s page is filled with plenty of personal anecdotes - including his journey in fatherhood and his new venture as an AIA insurance agent - not much is known about this unnamed woman. Even when he does post about her, he keeps her face hidden.

Earlier this year in March, she and Joshua celebrated his 32nd birthday together onboard a cruise. Joshua has also been seen hanging out with her pet dog, a white Japanese Spitz, on various occasions. It seems that the pair are pretty serious already, and perhaps having a child together would mean that the deal is sealed. Second wedding in the works, maybe?

Whatever the case between Joshua and Shannon, we hope that they’re each happy with their own separate lives after that previous whirlwind of drama.

From the looks of it, Joshua seems to be a very doting father towards Jedaiah, constantly bringing him on outings to the pool, beach, and playground in their limited time together. Recently, Joshua celebrated little Jeddy’s third birthday by taking him to the zoo, followed by cake cutting at home with a ton of presents. Caring for a second child should come as no problem to Joshua, and hopefully Jeddy adjusts well to having a new half-sibling as his playmate.

The gender of Joshua’s new baby is currently unknown, but we’re hoping for an eventual gender reveal! And maybe, just maybe, we’ll also get a glimpse of his new beau in time to come. In the meantime, we wish Joshua and his partner a smooth and uncomplicated pregnancy ahead.

More stories on celebrities and influencers: