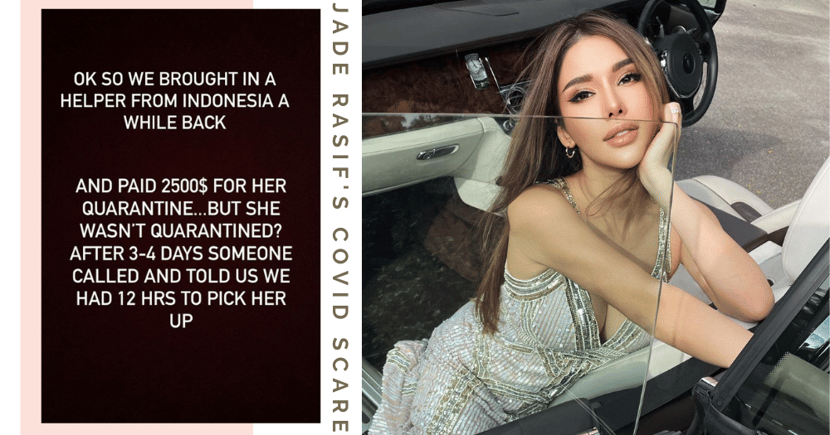 Singaporean DJ, actress, model, and influencer Jade Rasif made headlines last year for making a career switch to the healthcare sector full-time - after first volunteering to help in the fight against Covid-19 with data entry, and later on stepping forward to be part of the frontlines. Bravo, gurl.

Yesterday, the multi-hyphenate revealed a story about a Covid-19 scare involving her new domestic helper from Indonesia, an incomplete quarantine period, and how her workplace - a medical facility - nearly became one of the new Covid-19 clusters.

Read on to find out more about Jade Rasif’s Covid-19 scare! In a series of candid Instagram stories, Jade Rasif (@djjaderasif) shared how her family recently brought in a new domestic helper from Indonesia, and paid $2,500 for her to be quarantined upon arrival. However, she wasn’t properly quarantined - after 3 or 4 days, they received a call saying they “had 12 hours to pick her up”. Jade’s family expressed confusion and concern regarding this, saying that they thought their maid should serve the full quarantine period. But the person on the phone claimed that it was fine, since she had “already recovered from Covid-19”. Jade and her family decided to just go along with it, since they believed that the government knew best.

“Not questioning that guy was the biggest mistake of my life, guys,” Jade lamented. 2 weeks later, they received a call saying that their maid had to go for a sudden Covid-19 test, and turns out, the result was positive. It was later revealed that the maid was already positive for Covid-19 when she had first arrived in Singapore, but her case was deemed non-infectious.

“Then why did you guys take her back after 2 weeks of her going around all of Singapore?” Jade questioned.

This also raises the question of why the maid wasn’t quarantined from the start, especially since the $2,500 required for a full 2 weeks of it had already been paid. Given their close contact to a confirmed Covid-19 case, Jade and her family wondered if they should be quarantined as well. Yet, none of them received quarantine orders or were given stay-home notice (SHN) to serve - which resulted in a lot of panic on their end. In fact, they weren’t even called up to get swabbed, so they voluntarily forked out $200 per head and asked to be tested.

What’s even more preposterous is the fact that she tried texting the ambulance number on WhatsApp as a last ditch attempt at seeking information, but was rudely told to **** off. Unable to seek any official instructions from the relevant organisation, Jade then decided to self-quarantine, but needed to appear in court for an unspecified reason. She then informed the court that her maid had Covid-19, and was asked for evidence of her maid’s diagnosis in the form of a letter or WhatsApp text. However, Jade wasn’t able to supply any of this proof, as her correspondence with the authorities was presumably mostly done via phone calls. The saga then takes an even more ridiculous turn with Jade suddenly finding herself being called up for a police investigation for violating a quarantine order. Yes, the quarantine order that she was never given in the first place. Whut?

Luckily, the family’s Covid-19 tests all turned out negative, and their maid discharged with a full recovery. Jade shares that everyone living together with her has already been vaccinated, except her infant son, who is thankfully well and healthy.

“TBH if I wasn’t vaccinated, Singapore would be in even more trouble right now.”

Jade ended her story with a PSA telling everyone to get vaccinated and stay home, and reminded them not to blame healthcare staff for the latest restrictions that have been put in place - after all, they don’t control our borders, nor who gets put in quarantine.

“So yes that’s the story of how my workplace was nearly the next Covid cluster (lucky we are vaccinated and paranoid).” After hearing about her anecdote, Jade’s friends/fans also went on to share similar stories with her, some of which she reposted. In one case, the person’s Indonesian helper also experienced the same, where she was given only 8 days of quarantine instead of the standard 14. After working in their home for a week, the family received a call from the Ministry of Health (MOH) saying that their maid was a potential Covid-19 case.

In another case, a man from India tested positive, but had antibodies detected in him during his hospital stay, and was thus discharged. His family then got infected through him and became a Covid-19 cluster, while he got deported back to India. According to Jade, her maid’s brush with Covid-19 was not reported in the news, and did not have a case number tied to it. Her maid’s friend was also said to have been diagnosed with Covid-19 and despite her employers all put in quarantine, her case was also allegedly not reported as a community case.

For those who are unaware - it appears that not everyone from high-risk countries gets quarantined upon arrival in Singapore, nor do all of them go through the supposedly mandatory quarantine period. As such, the risk of community transmissions is always there with our borders open to them. While we cannot control our borders or the strictness of rules ourselves, we can control our activities. Given the state of heightened alert we are currently in, let’s all play our part so that we won’t have to endure a second Circuit Breaker and end up back at square one after an entire arduous year of hard work. Hopefully, things will get better before 13 June, and we’ll be able to move away from Phase 2 back into Phase 3 within a couple of months.

But first, getting through this month is the most crucial, and only time will tell as to whether we’re headed for lockdown part 2.0.

Things to do while you stay safe at home:

Share this with a loved one as a reminder to take caution!