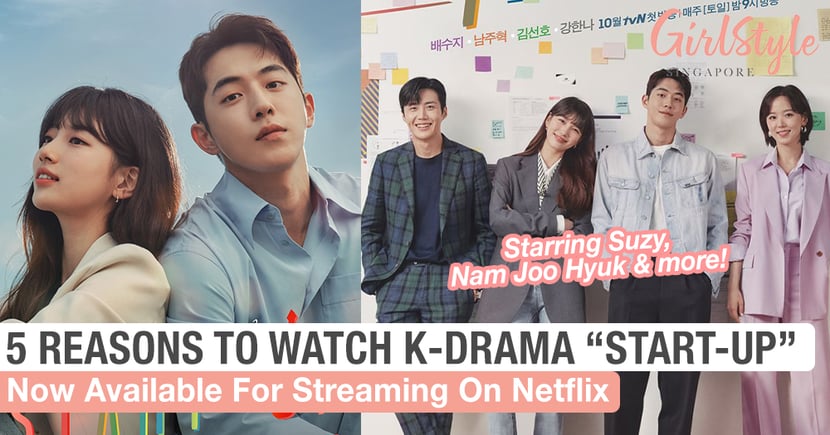 K-dramas focusing on youths and their journey in achieving their dreams is a popular theme and if you are a fan of that with romance mixed in it, you will love the newest drama, Start-Up.

Start-Up has just aired two episodes and has already amassed a large fanbase. We watched the first two episodes to understand why everyone's obsessed with this drama and it's safe to say we're hooked too!

Read on to find out why you should watch this drama too! Seo Dal Mi dreams of becoming Korea's Steve Jobs, Nam Do San is the founder of Samsan Tech who was once a math genius but has been going nowhere with his company's investments, Han Ji Pyung is an orphan who worked his way up to his current position as the leader of SH Venture Capital, and Won In Jae strives to create success on her own without her rich father's help.

Start-Up focuses on the lives of these four characters while touching on topics such as romance, family ties, career and more.

Here are five reasons why you need to watch Start-Up now:

#1 The four leads are eye candies Starring Suzy, Nam Joo Hyuk, Kim Seon Ho and Kang Han Na as the four main leads, Start-Up is the one to watch if you are always on the lookout for eye candies in dramas!

Suzy was a Miss A member and has been focusing on her acting career in recent years. Apart from singing and dancing, she has been proving herself as a notable actress in dramas such as While You Were Sleeping and Vagabond.

Nam Joo Hyuk first started out as a model who branched into acting and this good looking actor with a tall physique has always been a sight to behold. You might have seen him in dramas such as Moon Lovers: Scarlet Heart Ryeo and Weightlifting Fairy Kim Bok Joo.

You might recognise Kim Seon Ho from Laughter in Waikiki 2 and Kang Han Na from Moon Lovers: Scarlet Heart Ryeo as well. Start-Up focuses on the lives of the four characters who have very different backstories. We have the poor girl who is trying to succeed in life, the math genius who has hit rock bottom, the orphan who worked his way up to prove that he's capable and lastly, the rich girl who wants to escape the shadows of her father.

It's refreshing to see a drama with all of its main characters coming from different walks of life but with one common goal - to achieve their dreams. Dramas about youths trying to make it in life such as Record of Youth have been gaining popularity perhaps thanks to its relatable storyline. Start-Up is no different as it's about four young people coming from different backgrounds who are all just trying to succeed in this society.

The relatable and inspiring storyline shows the ups and downs of life and might just comfort you because it shows that you are not alone! Their passion and perseverance will encourage you to continue doing your best in every aspect of your life.

The smile: The Reason: pic.twitter.com/x232rr2mTR

What's a K-drama without any love triangles or a second male lead who will make viewers wish they could love him instead if the female lead doesn't want to?

Here's a warning though: the second lead syndrome in Start-Up is real so proceed at your own risk! The drama might only be two episodes in but our hearts are already aching for Kim Seon Ho who plays the character Han Ji Pyung.

Catch the first two episodes and you will probably be in the same dilemma as us!

#5 The first episode will already make you cry

We don't want to give away any spoilers but just know that you will need to prepare some tissues to wipe your tears away when watching Start-Up!

It's rare for a drama to be able to capture viewers' hearts and make them tear up in just the first episode (as it usually requires time for viewers to feel connected with the characters), but Start-Up has managed to do so.

There are many heart wrenching but also heartwarming moments in the first two episodes of the drama so if you like experiencing a rollercoaster of emotions when watching dramas, Start-Up might just be for you!

Check out the trailer for Start-Up below:

Start-Up is now available for streaming on Netflix.

While you are here, check out our other K-drama related articles: