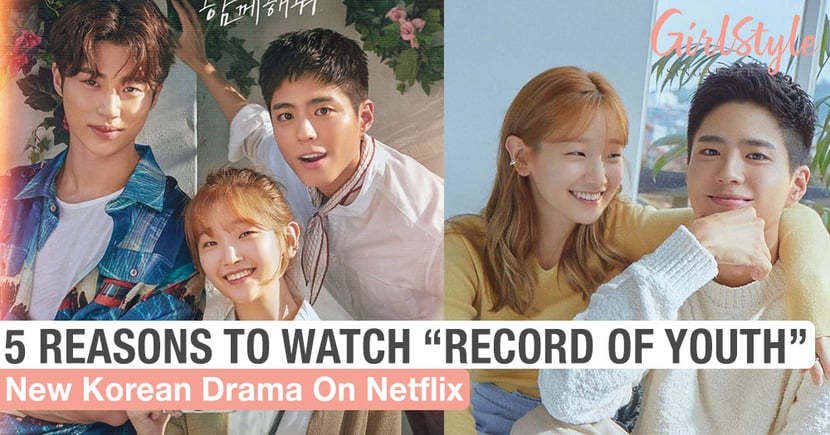 If you’ve already worked your way through countless Korean drama series like “Flower of Evil” and “Was it Love?”, then the newly-released K-drama “Record of Youth” is probably the next show you’ll want to add on to your list. It just started streaming on Netflix on 7 September 2020, and we can already see it being the next hot hit. Here are 5 reasons why you should watch it.

P.S.: Read our previous article on new K-dramas to watch if you need more show recommendations.

Read on to find out more about Korean drama “Record of Youth” that’s airing on Netflix!

#1: The leads are Park Bo Gum and Parasite’s Park So Dam The cast alone is a good enough reason for you to hop onto this K-drama series. Handsome singer-actor Park Bo Gum plays male lead character Sa Hye Jun, a model who dreams of becoming an actor.

Despite his dashing looks and popularity on the runway, he receives a less-than-stellar response for his acting auditions, and while he tries to make it on film, his modelling gigs start dwindling. Leading lady Park So Dam is a familiar face you’ll recognise as Jessica from Parasite. In this series, she plays An Jung Ha, a makeup artist who’s a massive fangirl of Hye Jun. In fact, it’s the thought of Hye Jun that keeps her motivated, as she hopes to one day rub shoulders with him backstage at a fashion show.

#2: There’s a new eye candy to watch out for, Byeon Woo Seok Apart from Bo Gum and So Dam, there’s a new face to look out for that might just be your next oppa crush. Enter Byeon Woo Seok, who plays Won Hae Hyo - Hye Jun’s best friend who also aspires to become an actor. In real life, Woo Seok is an actual up-and-coming model and actor, so it looks like they’ve chosen the perfect guy for the role.

#3: It highlights the relatable idea of youths wanting to make it in this world No matter what your goals in life are, we can all probably relate to the idea of wanting to find eventual success.

This series highlights that beautifully, showing how the main characters fight through adversity in pursuit of their passions - from Hye Jun working at Subway to make ends meet and being called the “burden of the family”, to Jung Ha quitting her corporate job for makeup and having to deal with a jealous trainer that hopes to humiliate her.

Surely this will inspire thousands of viewers out there to chase their own dreams as well!

#4: There’s a fangirl-and-celeb-crush narrative that results in a real friendship We’re all too familiar with the whole fangirl-and-celeb-crush narrative - some of you are living it as we speak. But in this story, the fangirl, namely Jung Ha, actually manages to meet her model idol Hye Jun, and they form a close bond. They then lean on each other for mutual support as they both strive to make it to the top.

Of course, the big question is: Will sparks fly and do they eventually end up together? Guess you’ll just have to watch to find out!

Does this mean that there’s hope for us peasants who are shamelessly in love with our celebrity oppas? Well, one can try. Perhaps, one day, your dreams will come true too. ;)

#5: The fashion and showbiz industry is represented in a realistic manner beyond the glitz Photo from Record of Youth

In movies, the world of fashion and entertainment is often portrayed by the media as full of glitz and glamour. However, “Record of Youth” gives us a glimpse of the struggles one would encounter in the industry before they’ve actually made it big.

We appreciate how the producers have chosen to represent showbiz in a realistic manner rather than paint a pretty, perfect picture of it. It’s the 21st Century and these days, we prefer our shows to have some level of believability, at least if set in the real world.

Watch one of the trailers for “Record of Youth” below:

Check it out on Netflix here.

Read our other articles related to Korean dramas:

Share this with a friend who likes Korean dramas!