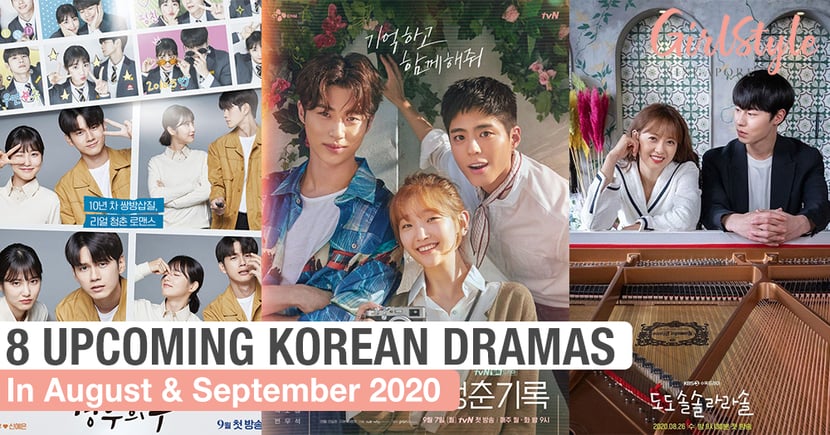 K-dramas in June and July 2020 have either finished airing or are finishing its run soon and that means it's time to look forward to new dramas once again!

Here are eight highly-anticipated K-dramas to add to your watchlist in the remaining month of August and upcoming September 2020.

#1 When I Was the Most Beautiful (just started broadcasting) Seo Hwan is an architectural designer who falls in love with Oh Ye Ji at first sight but his brother Seo Jin, a race car driver and the leader of his rally team, also has feelings for her. Seo Jin's ex-girlfriend, Carrie Jung, is unable to let go of him even after the break up. The four main characters' lives get intertwined in this melodrama. Goo La La has a happy-go-lucky attitude and could gain whatever she wanted with money, until she became bankrupt one day. Sun Woo Joon has a warm heart but is also free spirited. He makes ends meet by working part-time jobs. The two of them meet in La La Land, a piano academy in a small village, with secrets and scars that they are hiding. This sci-fi, fantasy drama is about Park Jin Gyeom (Joo Won), a detective who was born without emotions. Park Sun Young (Kim Hee Sun), his mother, was murdered and he vows to take revenge against his mother's killer.

He learns about the existence of time travellers and uses a device called "Alice" to move through time. He also runs into Yoon Tae Yi (also played by Kim Hee Sun), a physicist who looks like his dead mother. Actress Kim Hee Sun will be playing the two characters who look alike, Yoon Tae Yi and Park Sun Young. Park Joon Young (Kim Min Jae) started playing the piano when he was six and has won multiple prominent national and international competitions. Chae Song Ah (Park Eun Bin) is a college senior majoring in violin performance who is seven years older than her classmates.

Do You Like Brahms? is a drama about students at a prestigious music school and the people in their lives. Sa Hye Joon (Park Bo Gum) is a handsome and warm guy who is aiming to become a model and actor. Ahn Jung Ha (Park So Dam) works as a makeup artist who is also Sa Hye Joon's fan.

Record of Youth is a romantic youth drama that will follow the lives of young people in the world of modelling and their journey as they pursue their dreams. Based on the American film 17 Again starring Zac Efron, 18 Again tells the story of a husband on the verge of a divorce who finds himself back in his body 18 years ago.

Kim Ha Neul will play Jung Da Jung, his wife who returns to the workforce as an anchorwoman after raising their 18-year-old twins. Cha Joo Eun (Seo Hyun) is a con artist who scams people to get by in life. Lee Jung Hwan (Go Kyung Pyo) looks like an ordinary office employee but is actually a mysterious man. Jung Bok Gi (Kim Hyo Jin) is a professional con artist and Kim Jae Wook (Kim Young Min) is a con artist full of ambition who is also her business partner.

Private Lives is about swindlers who come across a national secret and mobilise all their techniques to reveal it by going up against a large company. Lee Soo (Ong Seong Wu) and Kyung Woo Yeon (Shin Ye Eun) both liked each other for 10 years but their relationship never had the chance to progress.

Kyung Woo Yeon decides to give up on her unrequited love after a decade of pining while Lee Soo, the longtime object of her affection, suddenly starts seeing her in a different light.  On Jun Su (Kim Dong Jun) enters Kyung Woo Yeon's life like they were fated to meet and the three of their lives get intertwined.

Which of these will you be watching when it airs?