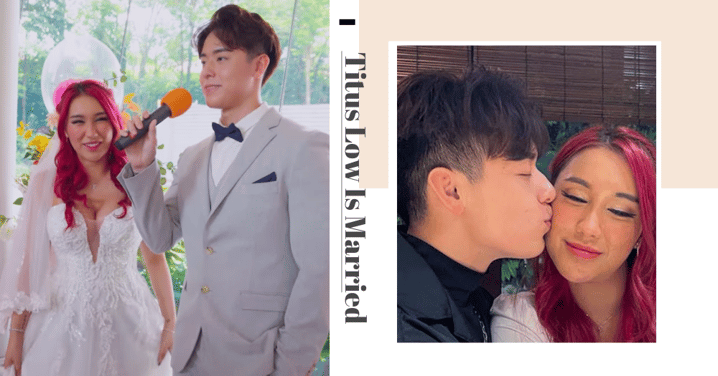 Titus Low Confirms That He's Married And Not Merely Engaged, Here Are 6 Reasons Why He Thinks She's The One

When ex-OF creator Titus Low first posted about getting engaged, his announcement was met with mixed reactions. While tons of congratulatory messages poured in, there were a group of skeptics who wondered if it was all just a publicity stunt. Some even raised questions on his sexual orientation, expressing their surprise regarding him being with a girl - although he had previously already mentioned that he was bi.

The 22-year-old influencer has since put all the rumours to rest by confirming that he didn’t merely get engaged; He’s now already happily married to his pink-haired beau Cheryl Chin, and these 6 reasons are why he thinks she’s The One.

#1: He already knew they had something special the first night they met

Sounds like something out of a chick flick romance movie, but this is what Titus had to say about his very first time meeting Cheryl: “The night that we met, we knew there was something.” Aww.

The couple first got to know each other at a party organised by YouTuber Jian Hao Tan, where they started talking and immediately hit it off. From there, they began chatting via Instagram and met up with each other almost daily.

After going back to her hometown in Malaysia, she returned to Singapore for Titus, and that’s when he asked her to be his girlfriend. And wouldn’t you know it - two weeks later, they suddenly wound up engaged.

In a YouTube video posted on 14 June 2022, Titus shared he and Cheryl were getting married the very next day. It is unclear as to when the video was filmed, but in any case, they’ve already tied the knot as we type this.

And the entire timeline from starting out as strangers to finally becoming husband and wife? Less than a month, we kid you not.

Well, guess the saying is true: When you know, you’ll know.

#2: She gave him a very different feeling compared to his exes

Cheryl is 2 years younger than Titus, but unlike his ex-girlfriend - other any of his other exes, for that matter - it just felt different with her.

“I didn’t have to try, you know, I just gradually clicked with her, and I felt like it’s a genuine connection. I know she’s the one because I feel very comfortable with her, I didn’t feel forced with her, I feel very happy with her.”

#3: They have similar interests, such as NFTs

After Titus got arrested for his raunchy OF videos, he started branching out to other types of content, including non-fungible tokens (NFTs). He’s since started his own NFT company called Tilo - no prizes for guessing who it was named after.

Similarly, Cheryl is also into NFTs. She was recently spotted in a photo with Titus and friends, with the caption reading, “Weekly meeting with the team behind Tilo NFT” - which suggests that she’s either part of his company, or is at least affiliated with it in some way or another.

Cheryl is also part of 8SIAN, an Asian female-centric NFT movement where she’s the Advocate for Asian Empowerment.

Cheryl is a talent from Titan Digital Media, owned by Jian Hao, which makes her and her new husband industry mates. Perhaps that’s why Titus feels like he can relate to her; Since they are both online content creators, and are no stranger to public attention, they have a mutual understanding of each others’ jobs as well as the challenges that come along with them.

“She’s like the perfect girl for me,” Titus gushes.

#5: They have a common vision on living abroad

Cheryl was living in Los Angeles for a bit, while Titus himself coincidentally also has plans to live in LA for a couple of years. It’s always a good sign when your significant other has a similar vision as you regarding living arrangements and possible migration.

#6: She likes dogs, and that’s a huge green flag for him

It’s no secret that Titus is a huge animal-lover, with multiple pets of his own. Other than a pair of fluffy Ragdoll cats named Simba and Nala, he also has a Labradoodle called Charlie, along with Bobby the Chowsky, the most recent addition to his little fur-mily.

According to Titus, he brought Cheryl to a dog cafe for their first date - just one day after they met - and it looks like she's passed the test.

“She actually likes dogs, so that was a green flag for me,” Titus says.

So, what’s next for Titus and Cheryl?

Titus says that fans can look forward to more couple content, as well as a couple YouTube channel, where he and Cheryl will be sharing more about their lives together.

“Or you can just subscribe to my own channel if you like seeing me only,” he says with a slight cheeky smile.