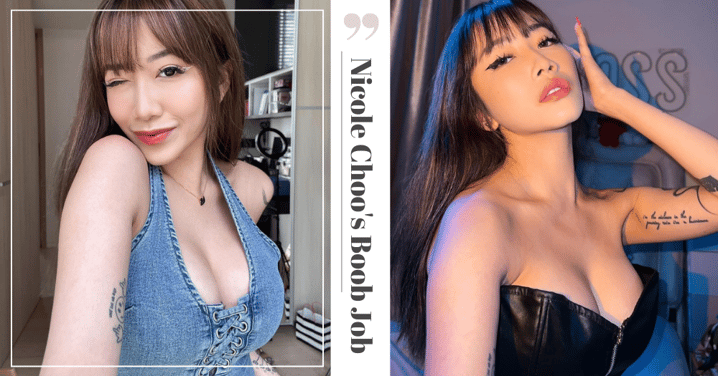 Whether you first got to know of her from her YouTube makeup tutorials, or her infamous relationship (and messy public breakup) with ex Ridhwan Azman, Nicole Choo is a name that shouldn’t be unfamiliar to you. In fact, many of you might have “grown up” together with the Singaporean influencer, following her journey through teenagehood and early adolescence - at some point of which she even penned her own poetry book, titled Nineteen.

And if you’ve seen her newest photos, you’d have noticed something - or should we say, two things - that are distinctly different about her. The 23-year-old has recently gotten a boob job, and she took to social media to openly share a detailed recount of the whole process.

Read on to find out more about Nicole Choo’s boob job!

Nicole has been very transparent about her breast augmentation surgery, which she candidly references in her Instagram captions from time to time. She even uploaded two videos charting the process and answering FAQs from her followers, as well as a few short Reels where she reveals her new bust to her friends and captures their reactions.

Originally with a set of A cups that were “empty at the top” and more triangular towards the bottom, Nicole got her chest transformed to a pair of C cups by Dr Timothy Shim, a surgeon from local aesthetic clinic, The Clifford Clinic. As per her doctor’s recommendation, she got teardrop breast implants from MENTOR - 270cc in her right breast, and 310cc in her left breast to balance out the uneven size. These were inserted underneath her muscles.

She was advised not to go bigger than this as it would cause her skin to stretch out a lot and potentially hinder her breathing. However, she might consider switching them out for a larger size 10 to 15 years later.

Below is a photograph of Nicole before her breast surgery, for comparison purposes. The "before" and "after" difference is significantly noticeable!

Some of the fat in her belly was also transferred to her chest via a fat graft, so as to cushion her new implants, help give an added boost, and provide a softer and more natural appearance. This was an added perk for her, as her tummy is now super flat. Talk about killing two birds with one stone!

The surgery started with her being under general anesthesia, and when she finally came to, she was super groggy and felt like she was “high”. During this period, her boyfriend, actor Noah Yap of Ah Boys To Men fame, helped film part of the vlog on her behalf - while playfully annoying her with questions like “what is two plus two?” along the way. Below is a peek of his shenanigans:

The whole procedure, including the fat grafting, cost her about $17,000.

After getting discharged from the clinic, Nicole made her way home, escorted by Noah. She couldn’t immediately feel any pain, but once the anesthesia wore off a couple of hours later, she started feeling sore on both her boobs and her back. She had to sleep propped upright, and kept waking up during her slumber.

For a couple of weeks, she had to wear a special bra to secure her new boobies in place, and couldn’t shower for a couple of days as it hurt to move - to the point where even yawning and going over bumps during car rides were painful. Thankfully, she didn’t really have to clean the area where she got her stitches as her whole chest was wrapped up, so she mostly just got her hair washed in the sink with the help of her mother.

She describes the pain of her implants rubbing against her muscles as a “fiery” sensation, while the fat graft site on her tummy experienced something that felt like “period pain and workout pain fused together”.

Fortunately, Nicole has since healed well, is super happy with the end results, and has no regrets. While she can sometimes feel her implants move a little when her chest muscles twitch, this is something she has gotten used to, and can now go about her daily life comfortably.

Nicole advises taking at least 1.5 weeks off work to heal post-surgery, and having someone around you to help you with basic things, because even simple tasks like getting up from bed and opening the fridge door proved to be a hassle for her during this recovery period. Though she was able to resume most of her normal activities after a couple of weeks, it took about 3 months for everything to fully heal.

Why Nicole Choo got a boob job + her words of advice

Nicole initially planned on getting her boob job in Korea, but because she was only 16 or 17 then, a consent form signed by her parents was required. She also heard that at some clinics in Korea, people pay a premium price for a really good doctor, only for an apprentice to take over once the patient is knocked out from the anesthesia.

As such, she felt like she would have a much safer experience in Singapore. She picked her doctor based on the tons of good reviews on him, as well as the fact that he’s not just a plastic surgeon, but a reconstruction surgeon.

So, why this big decision to begin with?

Nicole reveals that she always wore push-up bras when she was younger as she felt unappealing as someone with a small chest. Over the years, she eventually gained self-confidence as an individual, and eventually started just wearing stick-on bras, not caring if her boobs looked small.

Yet, after much thought, she still had the desire to have a larger bust, and went ahead to do it - for no one but herself.

“If I have the money and if I have the means to get a breast augmentation because I thought thoroughly about it, then why not?”

And what does Noah think of the whole situation?

Well, according to Nicole, Noah initially didn’t want her to go through with the surgery because he was concerned about her safety.  While she saw where he was coming from, her mind had already been made up and she remained firm on her stance.

She believes that something like this should not affect one’s relationship, because at the end of the day, your partner should have fallen in love with the person you are inside, rather than your outward appearance or “how your boobs feel.”

Clearly, Noah has respected her decision, so good on them! Can we also talk about how heartwarming it was to see how well he took care of her while she was recovering?

Nicole heavily emphasises the fact that she spent a lot of time thinking about the procedure and doing her research before diving in, and doesn’t want her young followers to rely on breast implants or plastic surgery in general as a means of eradicating their insecurities.

“I’m very happy I didn’t do it when I was younger as well because I’m very sure that that would [have] stunt[ed] my growth as a woman,” she muses.

More on local celebrities and influencers: