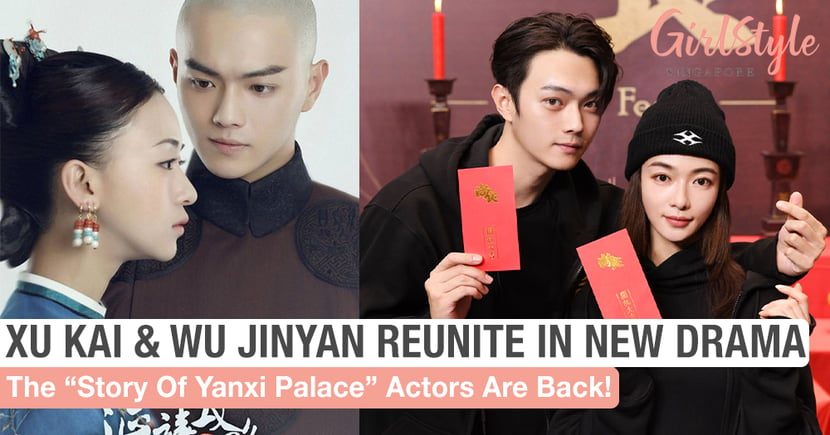 Story of Yanxi Palace, a 2018 Chinese drama depicting the lives of those in the Forbidden City and the schemes of palace life, was not only a huge hit in China but also in the rest of Asia.

Since then, fans of the show have been hoping to see the cast reunite in new dramas. Good news is that two of the actors, Xu Kai (许凯) and Wu Jinyan (吴谨言) will be reuniting in an upcoming historical drama! In Story of Yanxi Palace, Xu Kai played Fuca Fu Heng and Wu Jin Yan played main character Wei Ying Luo. The two characters' heart wrenching love story made viewers cry bucket of tears and it was even sadder for fans who rooted for their characters to get together when Wei Ying Luo ended up with Emperor Qianlong and Fuca Fu Heng died.

Since then, fans have been looking forward to seeing the two actors together in another drama, perhaps to make up for the loss they felt when watching Story of Yanxi Palace. Photo from @电视剧尚食 via Weibo

Well, fans will be glad to know that Xu Kai and Wu Jinyan will be playing the leads in an upcoming historical drama, Royal Feast (尚食).

According to the synopsis on MyDramaList, Royal Feast is set during the Ming dynasty in the 19th year of Yongle and revolves around the food bureau of the imperial palace. To host diplomatic corps and government intelligence agencies from around the world, the emperor decides to recruit women who are talented in cooking.

Yao Zi Jin (Wu Jinyan) manages to enter the food bureau as a palace maid after a tough selection. There, she meets Lu Xing Qiao (Xu Kai), a former beggar, and Su Yue Hua, a genius cook. The three of them work together, coming up with unique cuisines incorporating Chinese medicine while also recreating old classic famous dishes. Photo from @电视剧尚食 via Weibo

In photos posted by the official Weibo account for Royal Feast, Xu Kai and Wu Jinyan pose comfortably and munch on food during the filming ceremony - how apt and in line with the drama's theme!

Although we are not sure whether their characters will be romantically linked in Royal Feast, we definitely wish they get their happily ever after if they do!

Wu Jinyan also posted a cute image of a palace maid tossing a bun similar to the one Xu Kai bit into at the filming ceremony, along with the caption"Young master, time to eat!". She made sure to tag Xu Kai in her post as well.

Xu Kai then reposted her post with the caption, "Lao Zhu is here!". Could 'Lao Zhu' be his nickname in the new drama? Photo from @新剧不能停 via Weibo

With the filming ceremony done and dusted, official filming for the drama should start soon but we all know Chinese dramas take a while to air due to their long production schedule and intensive post-production.

It's stated on MyDramaList that the drama will air in 2022 but hopefully it won't take that long!

While you are here, check out our other Chinese drama related articles: