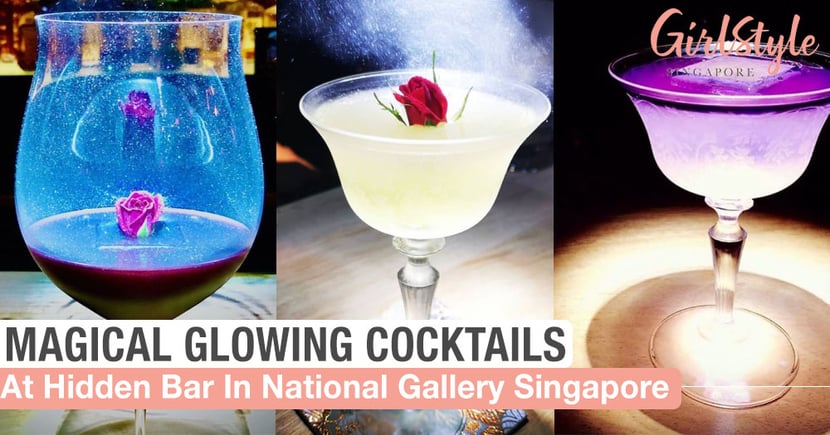 Concept dining is always a hit, be it cartoon character-themed eateries, romantic floral cafes, or feasting in a fairytale garden dome. Bars have also hopped onto the bandwagon, with many gorgeous themed drinking spots with fancy beverages springing up around the island.

Here’s a new one that you probably weren’t aware of all this while, even as you were browsing the art at National Gallery Singapore; A well-kept secret with ethereal glowing cocktails that look like they came straight out of a fantasy movie, The Public Eight will bring a mystical and spellbinding experience to even the most seasoned alcohol-lovers.

Read on to find out more about The Public Eight at National Gallery Singapore! Dark and slightly brooding, The Public Eight looks like any other bar in town on the upscale end that’s suitable for intimate dates. Take your pick from a stool at the long bar counter or one of the lower tables suitable for groups. The fairly simple decor better allows the stars of the show to shine - namely the cocktails, which are probably the whole reason why you’ve headed down in the first place. Serving up major Beauty and the Beast vibes is The Confession, a deep red concoction infused with Kenzo Estate Rindo, Calvados, and pomegranate, featuring a rose balanced on a single ice cube.

It already looks mesmerising in its original state, but the real magic lies in the cloud of glitter dust that will envelope the whole glass - in a spectacle carried out by skilled bartender Tsuyoshi Kimura. Another popular drink here is The Gimlet, a blue gin-based cocktail that appears to glow in the dark. There’s also the mysterious Forever Love, an adapted version of the Blue Moon cocktail. This pretty purple beverage has a floral-fruity taste, with Suntory Roku Gin, Elderflower, and Lemon. We suspect Stardust on the City was inspired by Singapore - could the crescent moon perched on top be a nod to our national flag? With Sencha, Apple, Yuzu, Blue Lagoon, and Lemon Zest, this unique drink will probably come with a fresh fruity flavour. No matter what you order here, both your eyes and palate will be in for quite the treat, so go on and pick your potion! Everything is expertly handcrafted with care and watching your drink being assembled in front of you will be an experience in itself. Prices range from around $24 to $30. That's on the high end, but all that enchanting fun will be fully worth the splurge, so head on down for your next date night and revel in the magic! Read our other alcohol-related articles: