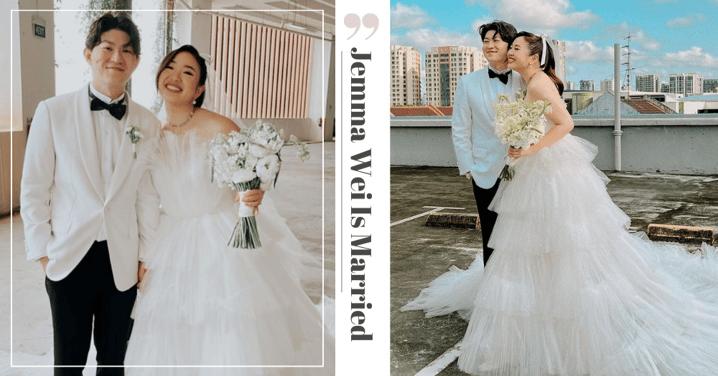 We’re a sucker when it comes to stories of love - and the one we’re about to share is sure to warm your heart. Singaporean writer-host-content-creator Jemimah Wei, better known as Jemma Wei, just got married over the weekend to her university sweetheart, artist-poet Shane Lim.

The pair went the non-traditional route with their wedding, which ended up being a three-part affair which involved McDonald’s delivery and a karaoke party.

For the uninitiated, here’s a little background on the love story between Jemma Wei, who turns 30 this year, and her now-husband Shane, who is 2 years older. They first met at NTU, and Shane first asked her out in October 2013.

In 2019, Jemma broke the news of being accepted for a 2-year stint at Columbia University in New York to pursue a Master’s in Fiction, and was quite sure that her partner would give up on the relationship - given that she’d already been constantly travelling for her job and was often away from home.

Contrary to that, Shane was fully supportive, and instead of running away, he proposed to her shortly after in an elaborate proposal disguised as a six-part play. The ring was a beautiful customised one from local jeweller storis, with part of the floral details made out of his grandma’s old ring.

Jemma’s answer? “See how lah” - which was incidentally the same thing she said to him 6 years before when he first asked her to be his girlfriend.

Jemma eventually counter-proposed to Shane with a ring she designed herself with the help of the same jeweller. The pair have been in a long-distance engagement ever since - throughout pretty much the entire pandemic.

Now with her MFA finally wrapped up, Jemma recently returned to Singapore in June 2022 to prepare for her wedding to patient beau in July. The big occasion happened across two days - 16 and 17 July 2022, and was kicked off with a solemnisation at a Presbyterian church.

Turns out, the man that walked Jemma down the aisle was also the very same person who officiated the ceremony; Yes, Jemma’s father was her wedding solemniser - how cute and touching is that?

The next day were part 2 and 3 of the event, namely, a catered lunch buffet reception for the couple’s family, and a dinner party with friends. These were held at Brick & Co. Studio, a relatively new barnyard-inspired studio with industrial-style chandeliers and hanging bulb lights for a cosy touch.

Jemma and Shane both donned white outfits, with Jemma’s day gown being a multi-layered Jessica Cindy number. She later on changed out into a sparkly tube gown for the dinner portion, where she and her friends had a crazy wild time with a karaoke session while hamming it up on the dance floor.

Jemma also revealed on Instagram stories that the party, which went on till late at night, involved multiple orders of McDonald’s delivery, and being able to have Chicken McNuggets with wine for her wedding dinner was a “life dream” come true.

Sounds like the entire event was a ton of wholesome fun - but we wouldn’t expect anything less from the creative power duo.

Now that they’ve officially tied the knot, does it mean that they’re shelving the long-distance stuff for good?

Well…it so happens that Jemma will in fact be moving back to the USA soon, this time to take on the Stegner Fellowship offered by Stanford University under their Creative Writing Program. This is a huge deal as she’s the first-ever Singaporean to be offered this prestigious fellowship.

But perhaps a LDR won’t be on the cards after all; In one of Jemma’s Instagram post captions, she addresses Shane, calling him “the most supportive partner in the world”, saying “let’s move to San Francisco. ❤️” - thus suggesting that they’re planning on heading there together.

It’s been 9 years since Jemma and Shane first got together and whatever’s coming next, we’re sure they’ll pull through as a team, as they’ve always been doing. We wish them a happy marriage and more great adventures ahead!