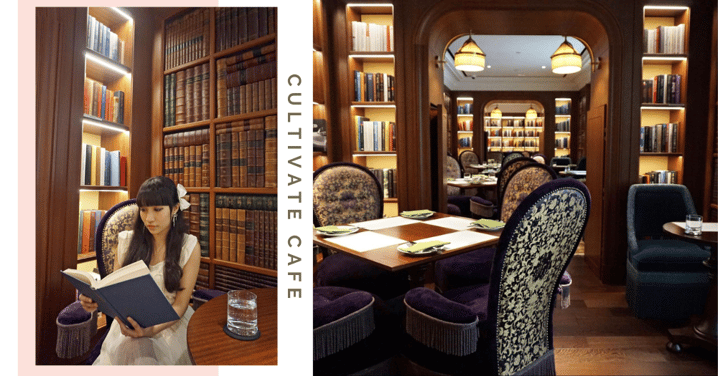 Some of you might remember Cook & Tras Social Library - an all-in-one book cafe, restaurant, and bar in the Tanjong Pagar area that was part of boutique hotel, Six Senses Maxwell. Unfortunately, they closed their doors during the infamous Circuit Breaker in 2020, and as a result, their F&B operations had also been put to a saddening halt.

But all’s well that ends well; The charming colonial hotel has since undergone some rebranding and is now called Maxwell Reserve Hotel - under The Autograph Collection by Marriott Bonvoy - and the grand eatery has reopened under the name Cultivate Cafe. With this new identity comes a whole new menu and dining experience. Here’s our review.

P.S.: We bet you'll also like this afternoon tea set served in an enchanting pink "storybook" at a swanky lounge in town!

Confession: When I first searched up Cultivate Cafe’s menu prior to visiting, I was surprised to find that it was vegan - unlike what Cook & Tras Social Library had been - and I’d be lying if I said I wasn’t initially disappointed. This writer very much loves a meaty feast, or some eggs at the very least.

But proceed with my plans I did, as the allure of the ambience was too good to pass up, and this choice didn’t go unrewarded. Basically, I showed up for the vibes, but stayed for the nosh, and didn’t regret it one bit.

You know how some cafes appear “Instagram-worthy” in certain photos thanks to clever angling and editing, but end up looking not quite as pictured IRL? Cultivate Cafe is no catfish - everything looks as opulent in person as it does in snapshots.

Walking through the premises’ arched wooden corridors, I felt like Belle in Beauty and the Beast as I soaked in the sights of gilded hardcovers lining the walls.

While a portion of the books are merely part of the decor, a good number of them are real. These include antique pieces and classic titles from authors like Charles Dickens. Feel free to pick them up and have a read while sunk comfortably into the ornate velvety armchairs, but be careful not to get the pages dirty with food stains!

Cultivate Cafe’s menu is not only meat-free, it’s also GMO-free and gluten-free, so those who are particularly health-conscious or have allergies can dine in peace. And don’t worry, self-professed carnivores - we promise you’ll be pleasantly surprised here, and you might even gain a new perspective on what vegan meals can be like!

While their 10 in-house Signature Cold-Pressed Organic Juices sounded like a real treat after walking in the heat, the $20 price tag put me off, so I opted for something that seemed more substantial - a Superfood Earth Bowl. My choice was the generously-portioned  Cauliflower Earth Bowl ($28), a medley of green tea noodles with pickled Japanese cucumber, avocado, radish, topped with sriracha lemon oil dressing, crispy kale, sesame seeds, and chilli flakes.

Boy were my tastebuds awakened with this one. Every mouthful was packed with different textures and layers of flavour. I’d describe this as being Japanese-inspired, but could somehow also pick out familiar hints of Indian elements in the condiments.

My dining partner had the Vegan Burger ($32). In place of a meat patty was a large portobello mushroom, served with charred roasted peppers and sweet potato fries. We suppose the sweet tomato chilli jam on the side was meant for the burger but they went well with the fries too.

Don’t be fooled by my photo above, which was hastily-snapped as we were too excited to dig in. Portions were sufficiently large, and the burger does come with bread (somehow hidden in photo).

In the mood for something crispy, savoury, and spicy at the same time? Have the Crispy Fried Kale Leaves with Salted Chilli Spice ($17) as a starter to share. While it’s on the pricey side, this highly-addictive snack is worth a try.

We did find it just a tad too salty, and gave feedback to the staff. They then brought the chef out so we could relay our comments in person. She was very receptive, and even gave us a slice of lemon loaf as a means of compensation despite us not expecting anything

On a related note, the service from all the other staff members was also spectacular during our visit. Just a disclaimer, though: We visited a week or two after they first opened, just slightly after regular lunch hours. As such, it wasn’t crowded, thus allowing the staff to focus more attention on us.

Vegan, vegetarian, or otherwise, Cultivate Cafe is the sort of place anyone can enjoy - even the staunchest of meat-eaters. What they lack in meat and dairy is made up for with full-bodied meals that don’t compromise on taste, with hearty servings to boot.

Other menu items include Sandwiches ($22 to $24), Organic Salads ($25 to $30), Smoked Onion and Asparagus Risotto with Grated Lemon Rind ($40), and a curious item called Cavi-Art ($32), which is basically a seaweed-based alternative to animal-derived caviar.

There are also gluten-free bakes, organic dairy-free ice cream, and a small selection of beer (from $12) for those who’d like some booze to go with their food. Check out Cultivate Cafe’s full menu here.