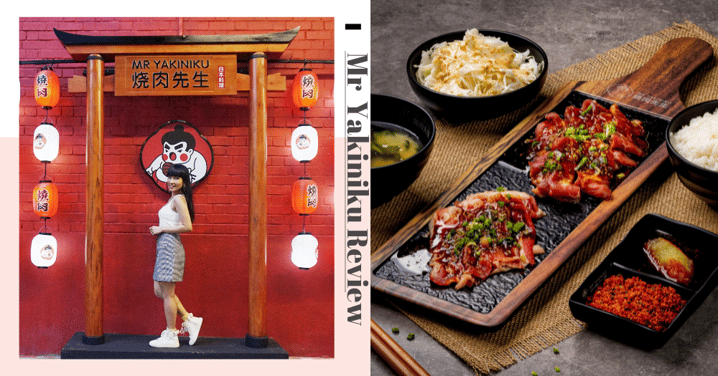 With a torii gate structure and brightly lit izakaya-style lanterns against a striking red feature wall, Mr Yakiniku isn’t an eatery you’d expect to find at a humble coffee shop. Hidden in an industrial area between Tai Seng and Ubi, this Japanese-style BBQ joint has value-for-money sets from just $8.80, as well as a la carte items and donburi from $6.90. Here’s our review!

Mr Yakinku is just a tad ulu, but it is because of its very location that makes it a great chill-out spot. The activity in the surroundings more or less dies down as the sun sets - given that those working in the area would have left by then - so it’s pretty peaceful during dinnertime, which is when we visited on a weeknight.

Thankfully, it’s not too far from various MRT stations, taking about 10 minutes from Ubi and 15 minutes from Tai Seng to get there by walking.

Now, don’t let the coffee shop setting put you off just yet. The one that Mr Yakiniku operates out of has quite the unique layout; The various stalls are on a mezzanine level of sorts, which you’ll have to climb a couple of steps to access, while a majority of the seats are on the ground floor outside - away from all the smoke and activity.

Don’t worry about the hot sun or a drizzle, because all the outdoor seats are sheltered by tentage, all decorated beautifully with strings of fairy lights. Romantic, much?

There’s ample space, so large squads with a headcount in the double-digit range can also dine together comfortably, without having to be split half and half. And don’t worry about having sweat trickling down your forehead as you feast, because there are multiple portable fan units for a breezy dining experience.

You can also opt for a mixed set of pork and chicken from $12.80, while vegetarians can go for the plant-based mock meat from $16.80.

All sets are served with rice, miso soup, and a generous bowl of salad with goma sauce.

If that’s not enough, there are a la carte options which you can add on, starting from a mere $3 for 50g of karubi, pork belly, chicken breast, or chicken thigh. There’s also wagyu steak ($18)! It’s worth noting that Mr Yakinku’s beef is all imported from USA and Australia to maintain a level of quality.

We recommend topping up  $1.50 for an onsen egg, or $2.50 for an aromatic onsen egg truffle oil. These can either serve as dipping sauces for your meat, or be slurped up as is. We went for the latter, as the fragrant truffle was simply too hard to resist!

Seafood lovers can order scallops (3 for $10), shishamo (4 for $6), and prawn (5 for $6), while those who need some fibre in their systems can go for a platter of kinoko moriawase ($6), aka assorted mushrooms.

Don’t expect your meat dishes to have the same sweetness as the ones found at expensive Japanese restaurants - after all, this is a hawker establishment. Nevertheless, the ones we tried were all tender enough and sufficiently marinated, and for what you’re paying, you’re already getting a great deal.

What elevated the flavours were Mr Yakiniku’s special handmade sauces and condiments, namely (clockwise from top-left):

Mix these up however you like to reach your desired flavour! I’m a fan of spice, but found the Togarashi Salt lacking in fire, but I did enjoy mixing the Ponzu with the Citrus Salt.

As for the iconic Mr Yakiniku Sauce? We can only describe it as the liquid version of a pineapple tart - you’ll just have to try it yourself to see what we mean!

Mr Yakiniku’s BBQ is only served during dinner, but those working in the area can grab some affordable Japanese bowls here during lunch. Mostly priced under $10, these start from $6.90 for chicken thigh, but can go up to $16.90 for wagyu.

You first pick your favourite protein, then decide between Japanese rice, dry ramen, or salad for your base, before selecting optional add-ons like truffle oil ($1) and karubi ($3). Everything comes with corn, mushroom, and an onsen egg for a healthy and balanced meal.

Ever seen a spiral staircase at a coffee shop, decorated with fairy lights, no less? Well, now you have! Apart from the torii gate, this is another photo spot where you and your dining companions can snap some photos at.

Check out Mr Yakinku’s full lunch and dinner menus via their Facebook page.

4
11 Aug
7 Smart Financial Tips Every Singaporean Woman Should Know, Whether You’re A Savvy Girlboss Or A Devoted Homemaker