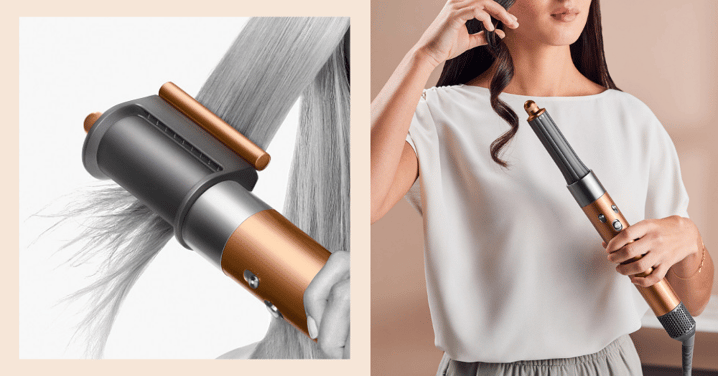 Oh how I've stared in awe at hair magically attaching itself onto the Dyson Airwrap and releasing with a curl. Impressively, Dyson has found a way to simplify this hair styling routine even further with their latest and most efficient Airwrap yet – the Dyson Airwrap multi-styler.

The Dyson Airwrap multi-styler might seem indiscernible from their well-known Airwrap but it comes with new and reengineered attachments powered by enhanced Coanda airflow for faster and easier styling without using too much heat.

The multi-styler comes with three speed settings, three heat settings and a cool shot function, as well as three new attachments - two improved ones and an all-new creation.

For the uninitiated, the Dyson barrels use air to attract and wrap hair around the barrel, a phenomenon known as the Coanda effect. Thanks to this genius technology, lazy folks like myself can simply hold a bunch of hair near the barrel and let it do its thing.

The previous barrels came in only one direction of airflow and so needed to be swapped out while styling. The new 30mm and 40mm ones, however, can now switch directions with a twist of the knob. Simply turn the pink knob to point at the arrow direction you prefer. This saves so much time when creating a natural look with curls turning in alternating clockwise and anticlockwise directions.

The new barrels also feature a rotating cool tip which makes creating curls faster and easier with no heat damage.

After getting the hang of using the Airwrap multi-styler, it takes me a grand total of 10 minutes to curl my entire head of hair, which is admittedly pretty thin. If you have a thick mane, expect it to take slightly longer.

This was created using the 40mm barrel:

To get the best results, the hair needs to be damp, but not soaking wet, and curled in small sections. Although that means more sections to curl, the total time taken is still significantly less than using a traditional curling wand.

All that positivity aside, don't expect the curls to last the entire day. After about 4 hours, my hair loosens into a natural look that I'm quite fond of. Those who prefer their curls to stay defined and bouncy for longer can spritz on hairspray or dry shampoo to create a better hold.

These improved brushes now come with a slit in the middle for enhanced Coanda airflow that attracts and aligns hair with increased control. This brush is ideal for creating that sleek salon blow-out as the air gets propelled along hair strands, creating smooth and straight tresses.

The soft brush attachment has been my go-to for styling my long fringe which takes about five seconds. Setting it at a low speed and heat level, I hold the brush near the roots of my fringe and twist it away from my face like how a hairstylist at the salon would. The result is that wind-swept look that frames the face.

Last but not least is this never-before-seen attachment that can be used both as a regular hair dryer and as a smoothening dryer. The two functions can be conveniently interchanged with a turn of the knob.

Despite the dryer's peculiar rounded shape, it has a powerful and precise airflow that dries wet hair quickly even on the cool setting. But the real scene-stealer is the smoothing mode which attracts and lifts longer hairs using the airflow. This airflow effect works just like using a hair dryer and a rounded brush, but simplified into a single attachment.

Simply hold it against the head with the pink bar facing up and the dryer will hide flyaways and create a neat, smooth finish. I have a lot of fine baby hairs that stick out on the mid sections of my hair and this attachment gets rid of them all. However, I find that the effect doesn't last long on humid days and it's best to apply hairspray to set the look.

Dyson's new Airwrap multi-styler proved to be an incredibly time-saving and noob-friendly styling tool that requires little to no skill to create salon-like results. Best of all, it doesn't need much heat to get the job done, so I can curl, straighten and style my hair more frequently with a peace of mind that it isn't getting fried and damaged.

The new Dyson Airwrap multi-styler is priced at $849 and will be available from 17 March 2022. New attachments are fully compatible with existing machines and owners can upgrade their full set with the trade-up kit, pricing and availability will be announced soon.

If your interest is piqued, you can purchase the Airwrap multi-styler or have a complimentary styling session to test it out at one of the Dyson Demo Stores in Singapore, including the one at VivoCity.

5
06 Aug
Tulip Hair Accessories Are Trending, Get These 7 Different Styles In Singapore For Less Than $2.30 Each