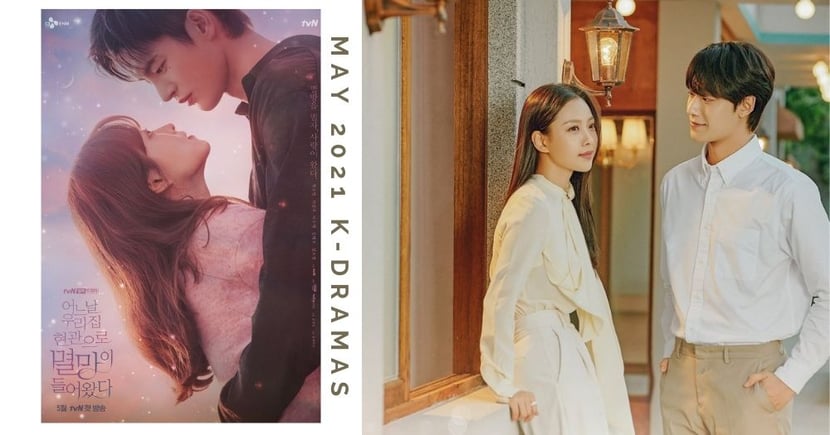 Feeling empty now that hit K-drama The Penthouse: War in Life has ended its second season? There's no need to fret though, as there is going to be a plethora of amazing new dramas airing in May 2021, and you should totally add them to your list while waiting for Penthouse's season 3.

Read on to find out more about the seven most anticipated Korean dramas airing in May! Starring Jung Il Woo and Girls Generation's Yuri, Bossam: Steal the Fate is an upcoming historical drama about the forbidden romance between an ex-aristocrat and princess.

Ba Woo (Jung Il Woo) hides his true identity to stay alive and dabbles in illegal jobs to make ends meet. Soo Kyung (Yuri) is the daughter of King Gwanghae who unexpectedly becomes a widow. Their lives intertwine when he accidentally kidnaps her and even though they get off on the wrong foot at first, they soon find strength to overcome their hardships together. One glance at the poster and you may recognise the lead actors as the brother-sister duo from Sweet Home, an adaptation of the Korean webtoon about humans turning into savage monsters. This time round, they get the chance to show off their chemistry as lovers.

Youth of May is set in the 1980s during a historically significant time period in Korea. Hwang Hee Tae (Lee Do Hyun) is a medical student with a mischievous side who is also determined and driven, while Kim Myung Hee (Go Min Si) is a smart and skilful nurse who puts up a cold facade. The two characters fall in love amidst the harsh reality they live in which will surely tug on viewers' heartstrings. K-pop fans must not miss out on Imitation, a drama about the lives of idols in the entertainment industry, and portrayed by none other but K-pop idols themselves! The star-studded cast includes U-KISS' Lee Jun Young, T-ara's Jiyeon, ATEEZ's Yunho and many more.

Imitation revolves around the lives of members in boy and girl groups, not forgetting the solo artists too. Be prepared to get a glimpse of what goes on behind all the glitz and glamour, and the juiciest part of all - secret relationships. Sky Castle's Kim Seo Hyung is back in another drama with a riveting storyline!

Mine is about ambitious women who work towards overcoming prejudices to find their true selves. Seo Hee Soo (Lee Bo Young) was a former A-list actress who gave up her career to marry the second son of Hyowon Group. Jung Seo Hyun (Kim Seo Hyung) is married to the first son of Hyowon Group and also comes from a rich family. Viewers will have to watch for themselves to see what goes on behind the closed doors of the glamorous upper class. Doom at Your Service is Seo In Guk's first drama in three years and he's pairing up with romcom queen, Park Bo Young, this time round.

This fantasy romantic drama tells the story of Myul Mang (Seo In Guk), a man who causes everything he touches to vanish, and Tak Dong Kyung (Park Bo Young), a woman who leads an unlucky life. She makes a contract with Myul Mang for 100 days to live however she wants and this fateful encounter between the two characters ignites a special romance. Han Geu Roo (Tang Jun Sang) is a young man with Asperger syndrome who works with his father at "Move to Heaven", a company specialising in arranging items left behind by the deceased. When his father dies, Geu Roo is left alone until his uncle, Jo Sang Goo (Lee Je Hoon), an ex-prisoner, is forced to become his guardian and tasked with running the company together with him.

The teaser is enough to bring tears to our eyes so make sure you prepare some tissues before you jump into binge watching this heartwarming drama. My Roommate Is a Gumiho is going to be a drama full of eye candies for viewers to feast their eyes on! It stars Jang Ki Yong, Girl's Day's Hyeri, Kang Han Na and Kim Do Wan.

Lee Dam (Hyeri) is a college student who accidentally swallows the marble of Shin Woo Yeo (Jang Ki Yong), a male nine-tailed fox. Any human who ingests the marble will only live for one year while the nine-tailed fox will not be able to become human without the marble. Thus, Shin Woo Yeo suggests living together with Lee Dam to think of a solution and this becomes the start of an unexpected romance.