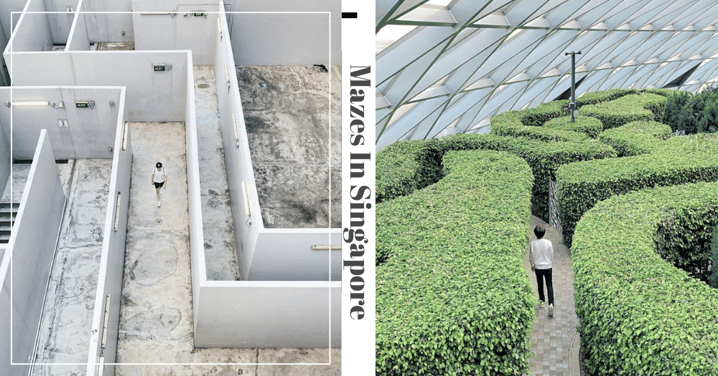 Going through a maze is more that just a photo opportunity, it can give you a little sense of accomplishment, that giddy feeling of being lost and potentially trapped, and bring you and your friends/family together.

Keep reading to check out five mazes in Singapore where you can give yourself a tiny challenge and leave with cool photos!

Reminiscent of those imposing hedge mazes in European castles, this one is a smaller version that'll still give you that fluttering feeling of being lost.

Look out for the flowers that pop out as you walk through the 1.8m-high plants! You can get a bird's eye view of the maze at a platform.

P.S. we included this maze in our list of 25 Insta-worthy places in Singapore.

No shade to Singapore Science Centre, but the last time most of us stepped foot in there was probably when we were in primary school. Well, there's a cool, trippy maze there that'll make you want to revisit this nostalgic place.

First opened in 2017, Professor Crackitt's Laboratory at SSC Hall A is a 270 square metre mirror maze with optical illusions and interactive exhibits. The maze aims to teach visitors about the physics of light, colour and reflection.

Another Insta-worthy green maze is this hidden gem at Pasir Ris Park! The hedges aren't as pristine as the ones at Jewel's Hedge Maze, but that might just add to its charm.

This futuristic, avant garde maze is actually a fire escape route. The white walls and concrete floors look pretty ordinary from inside the maze, but a photo taken from the nearby staircase will give you a striking, movie poster-worthy shot.

Labrador Park has a unique maze made of timber columns which doesn't pose much of a challenge but makes for a cool photo opportunity!

Also located within Canopy Park at Jewel Changi, the Mirror Maze has a cover of greenery branching overhead that creates an illusion of endless bowers before. Book tickets here.

More things to do in Singapore:

8
26 Jan
ARTBOX Is Back In Feb 2023 With Michelin-Starred BBQ Pork From Bangkok, 'Beam Of Pain' Challenge & More