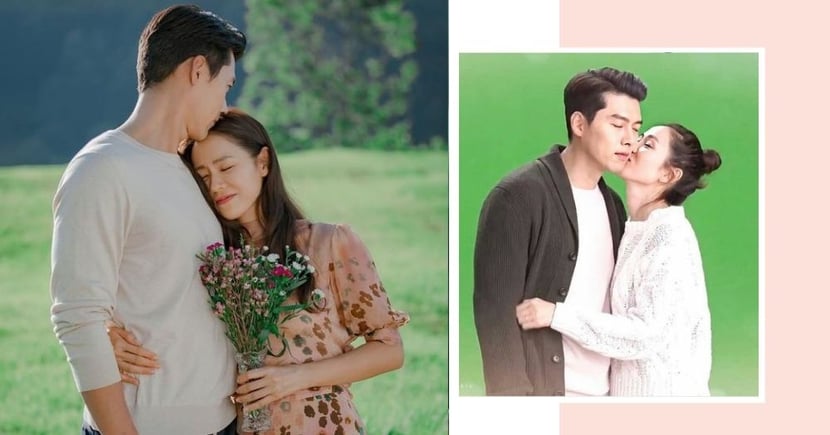 In case you missed it, it was revealed on New Year's Day that the Crash Landing on You stars, Hyun Bin and Son Ye Jin, are dating! You can read our write-up on it here.

It may not have come as a surprise for those who have been shipping them, as they were known for their amazing chemistry together both on and off screen.

But if you are still reeling from the fact that your ship is finally sailing, take a walk down memory lane with us and relive those times #BinJin Couple proved that they are a match made in heaven.

#1 His childlike personality shines when he's with her

Hyun Bin has mentioned before that he's not very expressive or talkative in real life, just like his character in Crash Landing on You. But Son Ye Jin's bubbly and outgoing nature always seem to be able to bring out Hyun Bin's hidden childlike personality.

There are a few posts on Son Ye Jin's Instagram account showing the both of them goofing around with funny and cute filters. It doesn't seem like something Hyun Bin would do, but it definitely looked like he didn't mind doing it with her!

#2 They can't stop laughing whenever they are together

Although these moments were all from before they started dating, it's clear as day that the both of them enjoy being in each other's company. They are always seen laughing together in behind the scenes footage in Crash Landing on You and during all those times they were promoting their 2018 movie, The Negotiation.

#3 From friends to lovers, from reel to real

Hyun Bin and Son Ye Jin were rumoured to be together back in 2018 when they were spotted grocery shopping in Los Angeles, but both parties denied and stated that they were just friends. It didn't seem like the rumours affected them as they continued being close friends and even chose to work together in their next project, Crash Landing on You.

In Dispatch's report that broke the news about their relationship, it was revealed that the pair met up a few times with the other cast members after the conclusion of Crash Landing on You and bonded over their love for golf. Both their agencies also confirmed that the couple went from reel to real, having developed romantic feelings for each other.

Their relationship was platonic for over two years before they got together - sounds just like the premise for a cute 'friends to lovers' K-drama!

#4 He didn't hide the fact that he admires her At the Crash Landing on You press conference, Hyun Bin shared that they were not able to act in the same space for The Negotiation due to the movie's setting, which is why he wanted to work with Son Ye Jin in another project.

He felt that something more lighthearted compared to The Negotiation would allow Son Ye Jin to show her charm further. He also mentioned that he has learned a lot from her as she is a good acting partner with many ideas that he takes inspiration from.

#5 Everyone is rooting for them

If you are familiar with the Korean entertainment industry, you would know that many celebrities tend to deny dating rumours for certain reasons such as privacy or fear of losing fans.

However, it's safe to say that majority of the public and fans alike are rooting for #BinJin Couple and many have even voiced that they wish Hyun Bin and Son Ye Jin would tie the knot soon!

#6 It's her first public relationship Son Ye Jin has never had a public relationship in her 20-year acting career ever since she made her debut at 18 in 2000. Her relationship with Hyun Bin is the only one she went public with! This only goes to show how much he and this relationship mean to her.

There's no need to convince anyone that Hyun Bin and Son Ye Jin are perfect for each other in terms of their looks. Do you think they have 'couple face'?

Both Hyun Bin and Son Ye Jin are also renowned actors who already have a great amount of successful works under their belts.

#8 She's happy in this relationship A few hours after their relationship was made public, Son Ye Jin posted a basket of flowers on her Instagram account and addressed the news in her caption.

She cutely mentioned that she felt "embarrassed" to be appearing in front of her fans "about [her] personal life rather than work-related news" in the new year. She then continued her message with "hmm", "umm..." and "haha", showing that she felt shy about it.

But the best part of it all is she mentioning that she is grateful to have "met a good person", referring to Hyun Bin, and assured fans that she would "work hard" on the relationship.

#9 He takes good care of her

Son Ye Jin had mentioned before that she likes nice and caring guys, and Hyun Bin definitely checks those boxes!

Hyun Bin was seen taking care of her such as reminding her to adjust her dress so that it covered her legs before sitting down, passing her a microphone, shifting her bottled water so she wouldn't trip on it and many more.

Perhaps being caring is his nature and that just so happens to fit her ideal type!

While you are here, check out these other celeb stories: