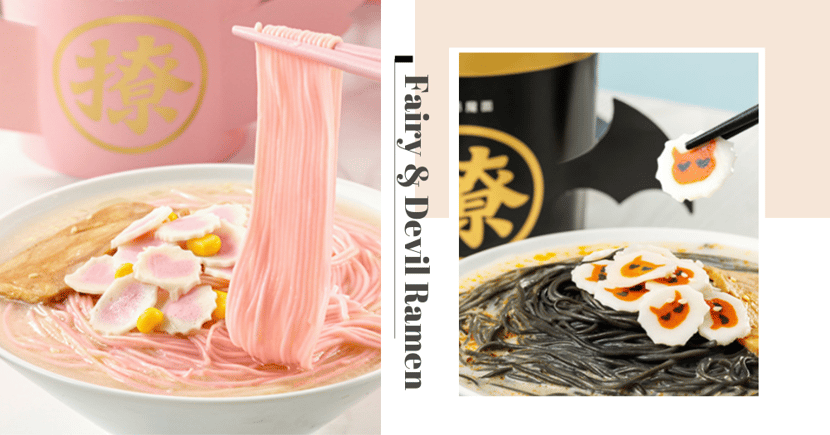 We’ve slurped our way through tons of new instant noodles so far, with the newest ones being Samyang’s Creamy Carbo Fire Noodles, a Korean Fire Demon King ramen with Carolina Reaper Pepper, and not forgetting the highly-raved Hai Chi Jia Suan La Fen.

White those all bring a novel experience when it comes to flavour, they’re all pretty standard in terms of appearance. But here’s a new option that has heavy emphasis on aesthetic appeal and flavour: the pink Little Fairy and black Little Devil instant tonkotsu ramen noodles from Chinese brand, Single Food (单身粮 - Dan Shen Liang). It’s now available in Singapore and we’ve included links on where you can get it further down.

Read on to find out more about the pink Little Fairy and black Little Devil tonkotu ramen in Singapore! Single Food (单身粮) was born in 2017, with its name capitalising on the self-deprecating trend of people making fun of themselves for being single. Since then, the brand has steadily risen in fame and they have now made their way to Singapore. Of course, don’t let the name be a put-off - lovebirds are also equally welcome to savour their snacks! We bet the pretty pink Little Fairy (小仙女 - Xiao Shen Nu) noodles have caught your attention almost immediately, just like it did ours. The box has a pair of fairy wings sticking out of it, and the gorgeous colour of the noodles is said to be attributed to dragonfruit juice extract. Other than the noodles themselves, another highlight of the Little Fairy ramen is the fish cake slices it comes with. Not just any fish cake, but fish cake with scalloped edges and pink heart prints! This is accompanied by corn kernels, green vegetables, and chashu pieces - everything you need for a satisfying bowl of tonkotsu ramen. Pink and girly ain’t your aesthetic? Get your goth on with the black Little Devil (恶魔鬼 - E Mo Gui) ones instead, with bat wings sticking out of the side of its box. These black noodles aren’t just hardcore in appearance - you best prepare your tastebuds for their sour and spicy flavour with mala chilli oil and vinegar included. Not for weaklings. The Little Devil ramen comes with the same condiments as the Little Fairy ones, but in lieu of pink hearts, its fish cake comes with motifs of a little devil creature that’s part ghoulish, part cute. It is said that the broth for both flavours is made from fresh tonkotsu and chicken bones, and the noodles are low in calories as they are air-dried instead of deep-fried.

Reviews by Singapore locals who have bought these have mentioned that these look exactly as how they appear in their photos, and taste great too. No one has really said anything about the spice level for the Little Devil noodles though, so you’ll just have to try it out for yourself to find out! If 6 cups of 1 flavour is too much for you to commit to at one go, you can purchase single cups for $3.69 each from the same Shopee store just to try them out.

Read our other noodle-related articles: