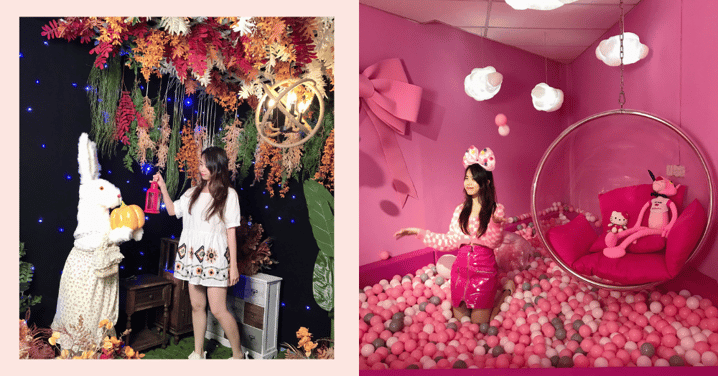 I WAN Selfie Studio Review: $30 For Access To All 11 Themed Zones, Over 20 Backdrops, Outfits & Photographer

Some might lament the selfie culture of millennials and Gen Zs, but judging by the number of selfie studios there are in Singapore, many are embracing the trend anyway!

A former selfie eschewer myself, I've been been swiftly converted to team selfie after an exhilarating time at the new iWAN (i玩) Studio. The selfie studio's affordable sessions grant visitors access to the full space that has gorgeous themed rooms along with complimentary outfits, accessories and even styling and photography services.

Located at KH Plaza in Aljunied, iWAN Selfie Studio has 11 themed zones, each with many photographic corners.

Once you arrive, a staff member will bring you on a short tour through the studio, introducing the concept and theme of the various zones. After that, you can start getting dolled up for your shoot at the dressing room.

The studio has over 200 outfits and a large range of accessories that were specifically selected to complement the themes of the rooms. There are plenty of pretty floral and lace dresses but what most of us are really here for are the unusual pieces we wouldn't wear daily (or ever). Think bedazzled dresses, over-the-top Barbie-esque outfits, period costumes and poufy princess gowns.

Note: besides the white dress and strawberry dress, all the outfits and accessories I wore were from the studio!

Once your outfit is settled, you can touch up your makeup and get your hair done at the vanity area. The staff will also provide basic makeup and hair styling services. This will come in handy when you're putting on a big gown or wearing traditional Chinese hair accessories.

On to the juicy part, the themed areas!

At the entrance of the studio is a gorgeous, idyllic indoor garden with Parisian cafe vibes. Just this area alone has multiple photo opportunities with various little nooks like the romantic-looking daybed with fairy lights.

The first room is hidden behind a kaleidoscopic tunnel that's a popular spot for wedding photography.

Walk through that trippy tunnel and you'll step inside a dreamy nightscape with glittering "stars". Once again, this room was filled with different photo corners. I was like a kid in a candy store, frantically posing in front of a Bali-style birds nest chair, an Alice in Wonderland-inspired area, a snowy Christmas wonderland and a giant moon.

These Christmas-themed backdrops and decor will soon make way for Chinese New Year-themed ones. The studio will also continually refresh their rooms to keep people coming back for new backdrops.

This room was serving Crazy Rich Asians vibes with an extravagant table set-up. I can imagine how fun it would be to take photos here with friends and pretend you're all living the bougie life.

Next up was a bubblegum pink room with a ball pit and two giant Barbie doll boxes.

You might run into one of the two photographers making their rounds at the studio and score a free professional photoshoot. They'll only provide a mini shoot but you can top up a fee to engage them for your whole session.

A photographer kindly helped to snap some photos for me at the giant Barbie boxes. He was very helpful in suggesting poses and facial expressions, and even reenacted them for me to copy!

If you're a sucker for the 70s and 80s Hong Kong aesthetic, you'll be spending some time at this nostalgic mahjong room complete with vintage posters, a rotary dial telephone and retro furniture.

This tatami room has two zones: a traditional Chinese calligraphy area and a Japanese tea house area. This room is rather dimly lit, but like all the rooms in the studio, it's equipped with softbox lighting that's lightweight and easy to use.

The backdrops were stunning enough on their own but I couldn't pass up the chance to live my ancient Chinese drama dreams in a hanfu! The studio has also has a range of yukatas that will go well with the sakura backdrop and Japanese parasols.

Another one for the nostalgia, this quaint classroom is the perfect place to relive your younger days or pretend you're in a high school drama series. For a more immersive experience, you can put on the white and blue Chinese uniforms, which you'll recognise if you watch C-dramas, or Japanese-inspired uniforms.

This little area is covered with pencil drawing-style illustrations creating the illusion of a 2D comic book world! It has a similar concept to 2D cafes like Cafe Monochrome at Jalan Besar.

Finally, there are two rooms with unique concepts. One is the Break Up Museum where those who had their hearts broken can leave their ex's belongings on display in a safe. After 30 days, the studio will ask if they want it back or thrown out. Another is the Single's Matchmaking Room where visitors can randomly pick a jar with someone's phone number based on their horoscope.

Taking and posing for photographs is a tiring affair, and when it's time for a much-needed break, you can sit and relax at the garden cafe-esque area at the entrance. Customers are welcome to bring their own food to enjoy at this area or even order food delivery. And if you're wondering, the time taken to dine here won't be counted in your session!

For the size of the studio and outfits available, the prices are pretty reasonable at $29.90/hr on weekdays and $35.90/hr on weekends per person. This price includes access to the entire studio, basic styling as well as photography if the photographer happens to be available. Children aged 6 to 12 get 50% off and admission is free for children under 6.

It took me about three hours to take selfies at six zones while making multiple outfit changes and taking breaks. If you're an efficient selfie-taker and limit yourself to just one or two outfits, it should be possible to cover the whole studio in one hour. Here's a tip: start with the costumed photo first as your time starts only after you've changed into it at the dressing room. The number of customers allowed in the studio at the same time will be capped, but it'll still help to keep a lookout at which rooms are occupied before deciding on your outfit.

For those who can see themselves spending a lot of time here, it might be more worthwhile to purchase a membership. Starting from the Gold tier at $198, you'll get unlimited access to the studio for a year. As the studio will change their sets every few months, it's a pretty value-for-money deal for those who love taking selfies.

While you're here, check out 7 more self photo studios in Singapore!