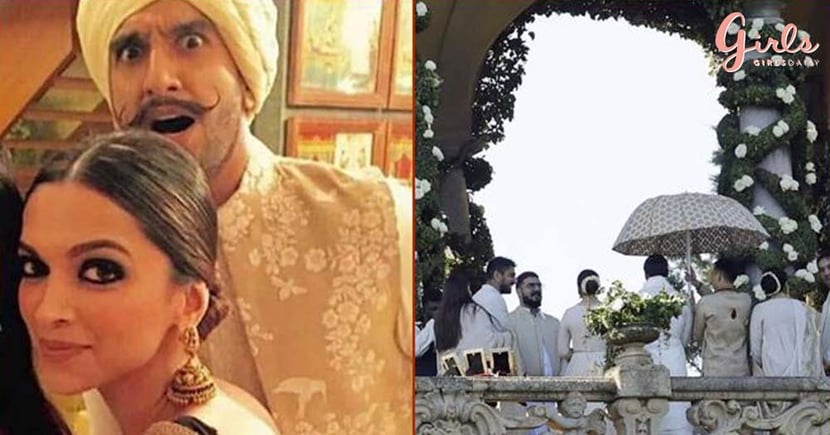 Hold your breath guys because we have been waiting for this big day desperately! Finally, it has happened, Ranveer and Deepika are now officially man and wife after a traditional Konkani wedding in Italy. Since they have announced about their marriage on social media we had dhol-nagaade playing in our heads. The celebrations have been taking place in the last few days but due to the no picture policy of the couple, it became very difficult to get our hands on the biggest B-town wedding of the year.

But our heart is quite happy now to get a small glimpse of the two cuties! Yes, guys, we have finally got our hands on some of the pictures of the wedding that spread like fire on social media and we couldn't have been happier. Here are some photos of #DeepVeer from their Konkani wedding ceremony!

This is a video of guests entering the beautiful venue by the lakeside. The leading news channel India Today was fortunate enough and of course, the first ones to get these exclusive shots for their fans!

Look at these bright fireworks wishing a happy and lovely life to the newlyweds!

Ranveer Singh's sister Ritika Bhavnani looks all stunning and gorgeous in an off-white and gold lehenga!

The floral decorations for the wedding look as pretty as the adorable couple!

Check out the decor at #ranveersingh #deepikapadukone #deepveerkishaadi

Here's a closer look of the bride and groom in their stunning outfits for the Konkani wedding ceremony!

We are in tears TBH and all these details are just too cute to handle! The six-year relationship is finally official now after such a long wait. Just so you don't miss out on any of the shaadi madness, here are a few details from their mehendi and sangeet that you just cannot miss.

The sangeet ceremony was held at Casa Diva, which is a luxury resort in the village of Blevio and the celebrations look no less than a dream. According, to reports, Harshdeep Kaur performed at their mehendi ceremony and the crowd was truly mesmerised with her songs. She sang Mehendi Hai Rachney Vali, Gur Naal Ishq Mitha, Kala Sha Kala and few other soulful numbers. There were also dhols at the ceremony like typical Punjabi weddings and the guests danced their hearts out.

Harshdeep shared this picture with her husband on Instagram but she had to delete the post, later on, to keep up with the security rules.

The groom sang the song Tune Mari Entriyaan from his movie Gunday for his pretty woman and this left everyone extremely emotional at the wedding. Apart from this, Shubha Mudgal also performed some sufi and gazal songs which made DP break into tears. However, her sapno ka raaja was concerned enough to hug her and make her smile again!

They also paid a tribute to all the movies they have done together and performed a slow dance on their numbers like Laal Ishq, Lahu Muh Lag Gaya and others which were played on guitar during the mehendi. Ranveer also went down on his knees during the Konkani ring ceremony called Phool Muddi which left the bride emotional. He spoke out loud about his love for DP with a speech and we are so impressed with the way Ram wooes his Leela.

We are now eagerly waiting for the pictures from the Anand Karaj ceremony, which would take place today as per the Sindhi traditions. If reports are to be believed Ranveer and his baarat is all set to arrive in a hydroplane *heck yeah*. Well, it has to be a filmy affair when it comes to Ranveer! Also while the entire nation awaits their photos from the Lake Como wedding, it is reported that after repeating the vows today, the couple will share the official photographs with their fans at 6 pm today.