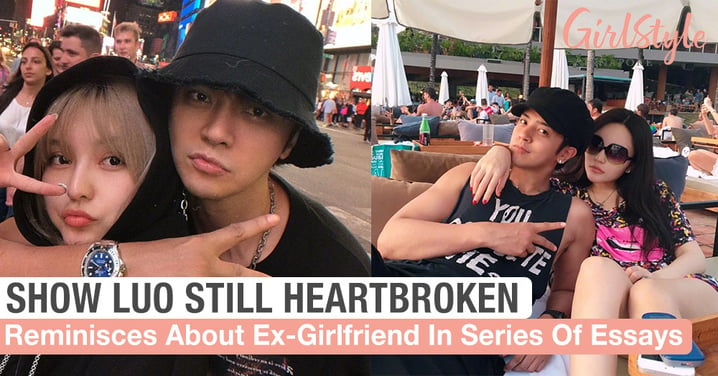 It’s been a month or so since Taiwanese singer Show Lo’s cheating scandal was exposed to the public by his ex-girlfriend, Chinese influencer Grace Chow. Grace has since moved on and seems to be enjoying her life, but unfortunately the same can’t be said for Show Luo.

The 40-year-old recently took to Chinese social media platform Weibo to pen a train of heartfelt mini essays, chronicling the ups and downs of the relationship. He also expresses regret and remorse for his infidelity, which eventually caused him to lose his now-ex partner.

The posts were written throughout the month, but were only released today, 20th May 2020. This day, aka "520", is a romantic occasion similar to Valentine's Day for the Chinese, as the numbers in Chinese sound similar to "I love you".

Titled “Boy and Girl” (男孩, 女孩), the series of no-holds-barred posts starts off by talking about how the pair first met at a dinner with mutual friends and eventually entered a relationship after spending more time together.

Show Luo shares that the first problem they had to overcome together as a couple was the long distance situation. As they increased the frequency of their meetings, feelings between them grew warmer, but each time was also met with sadness as leaving was always painful.

He then goes on to reminisce about the little significant events in their relationship - such as being stopped by the traffic police while on their way to get cold noodles on a motorbike, going on Grace’s first roller coaster ride together, and having Grace meet his mother for the first time.

According to Show Luo, Grace was not in the least bit nervous when meeting his mum, and the two ladies ended up having many common topics to talk about. They grew close, to the point of Grace taking his mother on a holiday in Japan when he was away for work.

In one bittersweet entry, Show Luo writes about how he and Grace wanted to snap photos together under the cherry blossom trees in Japan, but quarrelled over trivial matters and ended up missing the opportune moment.

He made a point to remember to capture their moments together during other trips, quarrels or not, because photographs are precious to them.

“Look, even though she can’t act much and isn’t smiling, her hand is still around my shoulder,” he writes in reference to the above photo, which was taken in Bali after another small spat. Through this, he gives us a glimpse of how they were always willing to put bad feelings aside and bounce back quickly despite any disagreements.

In another more lighthearted entry, he shares a photo of himself looking completely unrecognisable, in makeup and a wig. This was the handiwork of none other than Grace, who wanted to have a bit of fun dolling him up.

But it wasn’t just him acceding to her whims, because she made sure she went the extra mile to make him happy. One notable incident was when she set out to learn how to cook his favourite dishes from his mother, and whipped up a feast for him when they were in Australia, where he was working for a month.

“Thank you for giving me a taste of home,” he says.

He would also spur her on in her endeavours, and was the one who encouraged her to set up her eponymous clothing brand.

He ends off the post on a bittersweet note, saying that this was the longest period of time he has spent alone, and would take the time to face himself and the consequences of his actions.

Recalling the past few years, he says, “I am very happy that we have participated in many things together, experienced the joy of success together, faced the pain of low moments together, and grown together.”

“Really, like you said, most of our time together was happy. You rarely made me worried or sad. But your unhappiness was all caused by me...I encounter a lot of pressure at work and you would always find a way to help me express my emotions...you came to the restaurant to accompany me as I read my lines and chatted with me so I would relax…”

“But despite all the pain I’ve caused you over the years, you’ve never once let others discover your vulnerabilities.”

From the tone of his writing, it seems that Show Luo deeply regrets his actions - and is still heartbroken from the break up. We hope that he will eventually heal from this incident and grow as a person after learning from his mistakes.

Share this piece of hot news with a friend!

7
26 Jan
ARTBOX Is Back In Feb 2023 With Michelin-Starred BBQ Pork From Bangkok, 'Beam Of Pain' Challenge & More