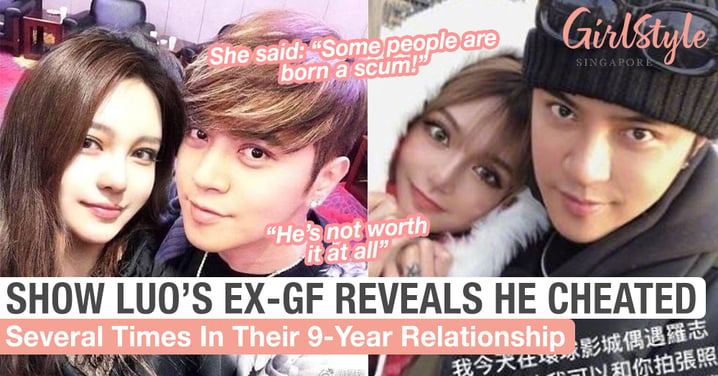 Taiwanese singer, actor and host, Show Luo (罗志祥) and his ex-girlfriend, Chinese blogger Grace Chow (周揚青), were rumoured to have broken up after nine years of dating.

Since then, the Internet has been speculating wildly about the reason of their breakup until today, when Grace Chow finally broke her silence by revealing the reason in a lengthy Weibo post.

It's not the first time the Taiwanese pop star had been embroiled in cheating controversies. Back in 2016, Taiwanese actress Cherry Yu told her friend that she was dating one of the "pop kings" for half a year without knowing that he was already attached. Neither party denied or confirmed the allegations.

Photo from @娱叔 via Weibo

In March 2020, netizens noticed a sudden lack of interaction between Show Luo and Grace Chow, which incited breakup rumours, gossip and conspiracy theories.

Photo from @新浪娱乐 via Weibo

Before the breakup rumours, both Show Luo and Grace Chow were often spotted together, celebrating birthdays, grocery shopping, posting couple photos and more. Show Luo had even mentioned in an interview previously that he saw Grace Chow as someone he would marry.

After much speculations and gossip on the Internet, Grace Chow broke her silence this morning in a lengthy Weibo post, revealing that Show Luo had cheated on her several times during their relationship and had many improper relationships with other women.

Grace Chow started off by saying she had already broken up with Show Luo for a period of time and did not reveal it at first as she didn't want to "occupy public resources during the pandemic". She stated that she wrote this post as a letter for Show Luo.

She shared that she had once asked Show Luo about his opinion on how she would react if they were to break up. He said she would "surely write a lengthy rap scolding" him. However, Grace Chow said that she didn't write a song but instead wrote this post as the "last letter" to him.

She then went on to reveal how she found out about his cheating ways when she looked at his phone for the first time, after nine years of listening to him that "a couple should have trust in each other".

She said that if she didn't, she wouldn't have found out he had "another phone specifically used to flirt with girls". Show Luo apparently "brought girls" to his house "almost every day", and each time was "a different girl".

She also revealed that Show Luo had improper relationships with his makeup artist and a female artiste under his company which he had introduced to her. Show Luo and his friends were apparently "disrespectful towards the girls" they brought out to "play" and often had unimaginable "group exercises". She said that all these things were done by the person she "loved the most", the person she had "loved for nine years".

She lamented that she was "really silly" and should have given up on the relationship the first time she caught him cheating but always forgave him when he showed remorse because she still had hope that she would "be the one to change" him.

She then went on to say, "Did you really love me, Show Luo? You must have... Otherwise, you wouldn't have pushed jobs away to spend time with me on special occasions or acknowledge our relationship in public. You are such a proud lion but you didn't mind to let your friends know you are scared of me (you said it's because of love and care). You have also done many romantic things for me and I was the first person you reached out to whenever you were happy or sad. We had been dating for so many years but you still called me every day, cried with me and laughed with me (goodness, writing about your strengths is even longer than writing about your flaws)."

She continued: "But why would someone who loves me so much do such things... The most important thing is, when did you have time to do all that?!! I accompanied you till 3 or 4am before saying goodnight, don't tell me you didn't sleep just to have one night stands?!"

Grace Chow said that she would have been a "proud ex-girlfriend" if they broke up because he "fell in love with someone else" or split because of "personality differences". She would have said that they are still "good friends" even after the break up but the situation is too "unfathomable" to not say anything.

She wanted her post to be a warning for other girls who she believes may be "gullible" enough to think that they are the "only one" in Show Luo's life. She went on to say: "Ladies, please don't believe that you will be able to change him because some people are born a scum (he really is a scum x100!!!)."

She then thanked Show Luo for the past nine years but also said she feels glad that there wasn't a "happy ending" for them.

She ended off her post by saying she's not upset because he's not worth it at all.

Photo from @新浪娱乐 via Weibo

Shortly after Grace Chow's public Weibo post, Show Luo's rumoured makeup artist wrote in a now deleted Weibo post, saying that a break up should be a clean one and that "it (referring to Grace Chow's post) definitely looks like revenge".

Photo from @罗志祥 via Weibo

Show Luo responded three hours after Grace Chow's post. He said: "Firstly, I'm very sorry that my personal affairs have occupied public resources. Thank you for your concern. Perhaps many people are waiting for my response but I can only say that during the nine years we have been together, we went through many ups and downs. I will reflect on what I have done wrong but there are many things that cannot be explained with just a few words. I'm thankful for the times we spent together and I have no regrets." He also tagged Grace Chow in his post.

What do you think?