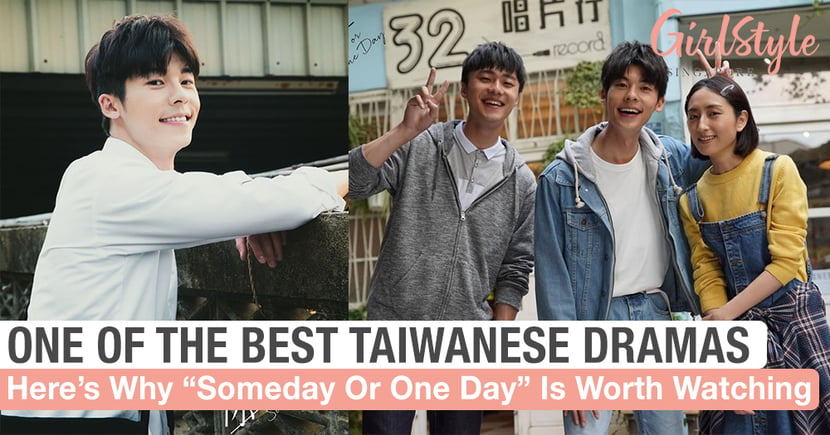 Although Taiwan has loads of classic dramas everyone must watch, there are also many other new dramas that have proved to be equally good.

This time, we have another drama recommendation for you - Someday or One Day (想見你). It's a 2019 drama that ended its run in February 2020 but many viewers are still hung up over the characters and the plot because it was that good.

I watched the first episode when it was broadcasting but put it on hold due to my busy schedule. However, I'm extremely happy that I decided to pick up the drama again and finished watching because honestly, I have no regrets!

Read on to find out why I think Someday or One Day is one of the best Taiwanese dramas out there! Someday or One Day is a time-travelling romance mystery drama that follows 27-year-old Huang Yu Xuan (Alice Ke) as she grieves over her boyfriend Wang Quan Sheng (Greg Han) who died in a plane crash. Yu Xuan wakes one up day as 17-year-old Chen Yun Ru (also played by Alice Ke) who looks exactly like her and meets Yun Ru's schoolmates, Li Zi Wei (also played by Greg Han) who looks exactly like her boyfriend Wang Quan Sheng, and Mo Jun Jie (Patrick Shih) who has a crush on her.

I was intrigued by the plot at first but upon reading the synopsis, I felt that it was quite confusing but trust me, everything falls into place perfectly eventually, highlighting the fact that the drama was amazingly well written and that the actors managed to bring their characters to life.

Here are some reasons why Someday or One Day is worth watching (minor spoilers ahead):

#1 It's so much more than just romance and mystery The romantic relationship between the main leads and murder mysteries play a huge part in moving the story forward but there is so much more to this drama than meets the eye.

Friendship, family ties, mental health, insecurities and many more things that affect people on a daily basis were talked about and portrayed in this drama. All these other factors make the drama and characters relatable even though the time-travelling plot was unrealistic.

You might find yourself empathising with the characters more than you would for other dramas and that's what makes this drama such a masterpiece.

#2 Unbreakable friendship that will warm your heart Mo Jun Jie has always felt insecure because he wears a hearing aid, but it was Li Zi Wei who broke down his walls and from then on, they became inseparable best friends. Mo Jun Jie might seem like a goody two shoes at first but whenever he is with Li Zi Wei, the stark difference of their personalities doesn't seem that jarring anymore. Mo Jun Jie brings out the caring side of Li Zi Wei while Li Zi Wei brings out the playful side of Mo Jun Jie.

Although their friendship meets obstacles in this drama, they always manage to resolve any misunderstandings and remain best buds. If this precious bromance will not warm your heart, I don't know what else will!

#3 Get to experience a myriad of emotions You will laugh, cry and be kept on the edge of your seat when watching Someday or One Day. If you love watching dramas with meaningful messages that will tug on your heartstrings but also has a mysterious vibe that will keep you wanting to watch more, this is the drama to watch next!

#4 Great acting by the leads Alice has had years of acting experience so it was no surprise when she blew viewers away with her fantastic portrayal of two different characters with very different personalities. It's safe to say Someday or One Day further proved to viewers just how great of an actress she is. As for Greg, Someday or One Day is his breakthrough project that managed to help him amass a large fanbase who appreciates his acting talent.

Patrick Shih who plays the sweet and caring guy Mo Jun Jie is the youngest among the three of them but his emotional acting will surely make you tear up too!

#5 Greg Han will make you swoon Greg Han's first leading role in Someday or One Day shot him to fame and honestly, can we blame both Huang Yu Xuan and Chen Yun Ru for falling in love with him? 😍 The 29-year-old will be acting in his first Mainland China film, On Your Wedding Day (你的婚礼), so you will be able to catch him on the big screen soon!

#6 Keeps you guessing till the very end Just when you thought you have everything figured out, the plot twists will blow your mind and keep you guessing till the very end. I mentioned that the drama might seem a little confusing at first but rest assured that as long as you pay attention, you will understand everything and see just how well written this drama is.

Someday or One Day is a pretty short drama with just 13 episodes but it has managed to leave a mark on me. I believe many others who haven't had a chance to watch the drama will love it too as long as you give it a chance.