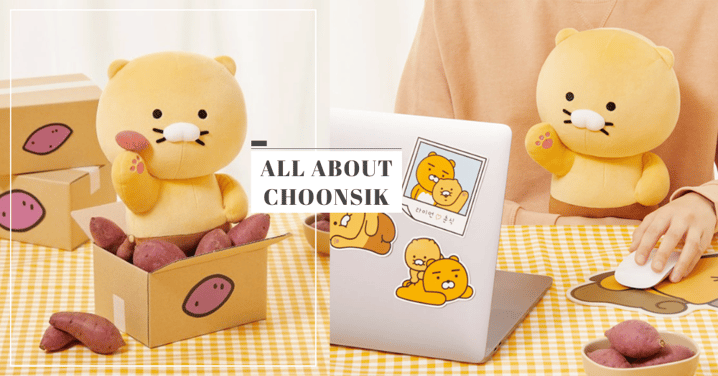 Ryan and Apeach need no introduction, but you might be familiar with the gang’s newest addition, Choonsik (sometimes written as Chunsik). While still relatively unknown in Singapore right now, Choonsik is highly popular in South Korea. Here are 8 fun facts about Choonsik, as well as where to get official merchandise in Singapore.

P.S.: Check out our article on the massive 3-storey KAKAO FRIENDS Flagship Store in Busan, Korea!

#1: Choonsik is a little cat

You might be wondering if Choonsik is a lion like Ryan is, but this cutie is actually a little cat. Well, technically, lions are under the cat family too, which explains why Choonsik appears to have some visual similarities with Ryan, such as a prominent white muzzle, and an orangey colour.

#2: Choonsik was rescued from the streets by Ryan

So, how exactly did Choonsik join the KAKAO FRIENDS family? Well, it’s all thanks to Ryan, who rescued it as a stray from the streets. In fact, Ryan actually passed by Choonsik multiple times while running errands, but initially didn’t notice Choonsik while absorbed in his busy daily tasks.

It was only much later that Ryan noticed Choonsik sitting quietly in a discarded sweet potato box. He then decided to take Choonsik home, make it his pet, and the rest is history. #adoptdontshop

If you’ve noticed, we haven’t used any pronouns where Choonsik is concerned, and that’s because its gender is unknown. There are some unofficial sources that state that Choonsik is female, but KAKAO FRIENDS’ official pages and social media accounts never refer to Choonsik as specifically male or female. That said, the name Choonsik is traditionally male, and makes a reference to springtime.

Unlike other cats, Choonsik does not like fish or canned food. This almost sent Ryan into despair the first time he tried to feed Choonsik, as it was rejecting everything and refusing to eat. Turns out, Choonsik’s favourite food is sweet potatoes, and that pretty much makes up most of its diet! This is why a good number of Choonsik merchandise often involves sweet potatoes in its design.

Choonsik has also been found guilty of hiding sweet potatoes all over Ryan’s house! But that’s excusable, since hiding “treasures” is typical cat behaviour.

#5: Choonsik has a weird habit of putting its hands down its pants

We’re not sure why, but one of Choonsik’s distinct habits is to frequently stuff its hands down its pants. This is reflected both in the KAKAO comics, as well as official merchandise.

While this could potentially be rated M18 or R21 in a different context, the way this is depicted is more cute and endearing than anything. Perhaps Choonsik simply enjoys the warmth and cosiness?

#6: There’s a whole series of comics centred around Choonsik

Choonsik brings a ton of colour to Ryan’s life with its endearing antics, and these are chronicled in an ongoing series of comics, with regular uploads on Ryan’s official Instagram page. The comics are posted every few days, so go on and follow the account if you’d like to see what the pair are up to! The captions are all in Korean, but many of them are understandable even without reading the text, and in any case, it’s still fun to check out their shenanigans.

#7: Like a true cat, Choonsik loves sitting in boxes

Cats will be cats, and cats love boxes. Choonsik is no exception, often pictured sitting in its little cardboard box and just lazing about.

Once, Muzi and Apeach accidentally broke Choonsik’s box while playing with it when Choonsik was out, but the whole squad pitched in to help repair it with tape - just in time for Choonsik’s return. Thankfully, Choonsik didn’t suspect a single thing!

Ryan and Apeach have long been the leading characters of the KAKAO FRIENDS franchise, but it looks like Choonsik is about to usurp that position to be everyone’s new darling. Fans in Korea are going crazy over this adorable round character - so much so that that 3-storey KAKAO FRIENDS Flagship Store in Busan that we visited has a whole “Choonsik’s Room” section dedicated to itself.

In fact, the shelf showcasing the top products of the moment had a Choonsik plushie at first place, while items themed after the other characters took the lower positions.

Where to buy Choonsik merchandise in Singapore

Singapore does not have an official KAKAO FRIENDS store as of yet, but there are some retailers who do carry their licensed products. We recently spotted Choonsik-themed stationery at Urban Write that were going at affordable prices starting from around $2.90.

Do also keep your eyes peeled for special collaborations! The latest one that’s caught our attention is the new Etude x KAKAO FRIENDS collection with both skincare and makeup, including the brand’s TikTok-famous lip tint. The Choonsik items have the cutest pink packaging that’ll make you fall in love instantly!

Otherwise, you can always check out pre-orders on Shopee, where you’ll be able to find Choonsik keychains, stuffed toys, kitchenware, stickers, and accessories like bags. Some of these are shipped direct from Korea, but make sure you check seller ratings and reviews before committing to a purchase!

If you're more of a Disney person, check out our article on LinaBell, the newest Duffy and Friends character,  with fun facts and places to get licensed merchandise in Singapore!