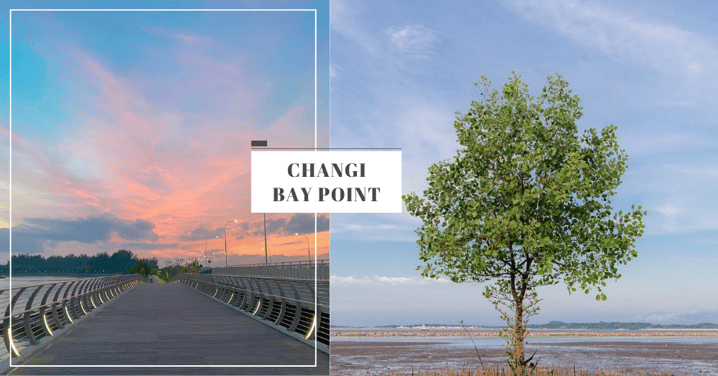 The already scenic coastal area of Changi just got a level up with the newly-unveiled Changi Bay Point Park Connector - a fresh chill out spot that makes up part of the route connecting East Coast Park and Changi Beach Park. While seaside views along the East of Singapore are nothing new, what makes Changi Bay Point PC stand out from the rest is its “overseas vibes” with lush lalang and a couple of lone trees, including a “floating” one. Some have even likened it to Jeju Island in Korea!

Here’s a handy guide with all you need to know about Changi Bay Point Park Connector including directions, best highlights to look out for, and tips to make your visit an even more enjoyable one.

For more outing ideas, check out our list of 20 new things to do in February 2022!

Read on to find out more about Changi Bay Point Park Connector in Singapore!

How to get to Changi Bay Point Park Connector

Changi Bay Point Park Connector is accessible via public transport, though the feeder bus journey from the nearest MRT station will take quite some time (around 30 minutes depending on waiting time) and you’ll have to do a fair bit of walking too. The nearest bus stop is located at Carpark 6 of Changi Beach Park.

Admittedly, we were lazy and decided to just take a cab from one of the many malls near Tampines MRT station - we highly recommend doing this if you’re not on a tight budget as it’ll save you a ton of time and energy.

Those with cars can park at Changi Beach Park Carpark 7, where there’s a GoCycling kiosk for bicycle rental. The start of the Park Connector is just a short walk away that shouldn’t take you more than 5 minutes.

Photo from Tiffany Tan via SG PCN Cyclist on Facebook

Changi Bay Point Park Connector spans across 3.6km - not overly long such that you’d be gasping for dear life by the end of it, but still substantial enough for you to while away a good amount of time there.

The path you’ll be walking on is flanked by greenery, with one side offering seaside views. At certain points, this veers off into wooden boardwalks that allow you to get closer to the waters without actually having to get your shoes dirty with wet sand. One of the boardwalks connects to a semi-sheltered area with toilets and vending machines.

There’s also a lookout pavilion with benches where you can rest your weary legs after a long trek. This spot offers a sweeping eyeful of the sea, with islands in the distance. The little staircase leading up to the platform lights up in the evening, making it all the more romantic. A potential proposal spot, perhaps? 😉

It’s interesting how the scene along the park connector looks vastly different at various times of the day, with various tide levels. During high tide, you’ll be right at the water’s edge when standing on the boardwalks, but during low tide, you’ll see a wide stretch of sand before the shoreline.

Much of the path is lined with fluffy lalang grass. Do be kind to the plants and step around them gently instead of trampling all over them if you’d like to get past to reach the water - after all, they can only be enjoyed by all in the long run if they are able to survive! Let’s not allow human activity to be a cause of their potential demise.

You’ll find a couple of rest spots along the way with regular park seats as well as wooden log benches, and these offer some of the best unobstructed waterfront views. However, they’re rather limited in quantity and we expect that they’ll be highly sought after especially during peak periods on weekends, so the chances of you snagging one for yourself is probably slim unless you’re willing to stand around and wait.

Thus, if you’re planning on sitting down and munching on some sandwiches or light bites, we suggest bringing your own portable chairs if you don’t mind the minor hassle. Alternatively, you could always sit on the ground by the breakwaters, or lay out a picnic mat by the beach.

Jurong Lake Gardens and Upper Seletar Reservoir might have their own famous lone trees (aka “Instagram trees”), but Changi Bay Point might possibly trump all with not just one but a handful of such trees. We weren’t exactly counting, but we remember spotting at least three during our visit there.

The most impressive one of all? A charming little “floating” tree with roots firmly planted in the shoreline, bringing to mind the iconic Wanaka Willow in New Zealand!

Do note that the tree only appears to be floating during high tide. At other times, it stands in the middle of dark sand and moss - and a bit of washed-up trash strewn around. One could say this is a case of "Instagram versus reality", but that's just how nature and its cycles for you. Litter aside, we actually found the post-apocalyptic-esque sight strangely beautiful in its own unique way.

If you'd rather not leave things up to chance, keep track of the daily tide predictions to make the most out of your trip!

If desolate scenes that look straight out of an emo music video aren’t your sort of thing, look to the other sea-facing lone trees that serve as great photo spots no matter the tide level or time of day. They look especially lovely when bathed in the warm hues of the setting or rising sun, so try to time your visit accordingly!

Photo from Tiffany Tan via SG PCN Cyclist on Facebook

Changi Bay Point Park Connector has two 80-metre slip-resistant cycling bridges which serve as a connector between Changi Coast Road and Tanah Merah Coast. Needless to say, these come with a view too.

This park connector makes up part of the Eastern Loop of the Round Island Route (RIR), a continuous 150km network of park connectors that go around the entire island. From here, you can either cycle or trek further up to East Coast Park and Marina Bay, or go the other direction towards Pasir Ris Park, Coney Island, Punggol Waterway Park, and Rower’s Bay if you’re up for a good workout.

Share this with a friend who loves the great outdoors!