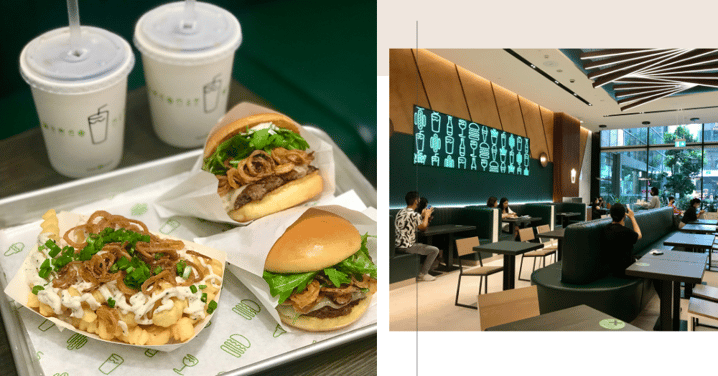 Westies, Shake Shack hasn't forsaken you! After opening seven restaurants in Singapore, they're now landing at a convenient location for you at Westgate. To celebrate the occasion, there will be a limited-time menu and an outlet-exclusive concrete.

Located at level 1 of Westgate, the restaurant has a decidedly posher interior design than their other outlets like the Great World shack which has vivid pops of colours and the VivoCity shack with its casual beach cafe vibes.

As with every new shack, there will be a new limited-time menu to look forward to. This time, it's a black truffle menu featuring three crowd-favourites with a truffle twist.

The menu will be available first at Shake Shack Westgate from 30 October, rolled out at all other Shacks from 4 November, and ending its run on 31 December 2021.

The Black Truffle Burger (single: $14, double: $17.50) is like their usual Angus beef cheeseburger, but elevated. In between the juicy beef and soft buttered bun were crispy fried shallots, refreshing and sharp rocket and a decadent black truffle mayo sauce, a combination that was simply *chef's kiss*.

The sauce had a refined, gentle truffle aroma that was robust and potent, complementing the other flavours rather than overpowering them. Those who like powerful blasts of truffle flavour might not get what they're looking for, but if you prefer your truffle rich without overwhelming the taste buds, this burger will be throughly gratifying.

If I had to nitpick, there were bites that were a tad bitter due to uneven rocket distribution in the burger, but that was easily fixed with some adjustments.

The Black Truffle Fries ($8.90) is another winner, topped with the same black truffle mayo sauce, fried shallots and a sprinkle of fresh scallions.

The Black Truffle Chick'n ($14) is also a must-try. The chicken patty was tender and well-seasoned with a peppery kick, as per usual, but given a more atas and full-bodied flavour profile with fresh rocket, black truffle mayo and tangy pickled shallots.

The outlet-exclusive concrete at Westgate is the Peelin' Cherry-fic (single: $7.50, double $9.50), a custard version of a banana split. It features a vanilla and chocolate custard base with a blend of fresh bananas, topped with caramel sauce, crunchy sugar cone shards, a cherry and Lemuel chocolate chunks by local chocolate maker, Ronald Ng.

This is one of those light desserts that still hit the spot thanks to the rich chocolatey flavours balanced with the bananas. And unlike most Shake Shack concretes, it had a generous serving of crunchy toppings which gave a nice texture down to the last bite.