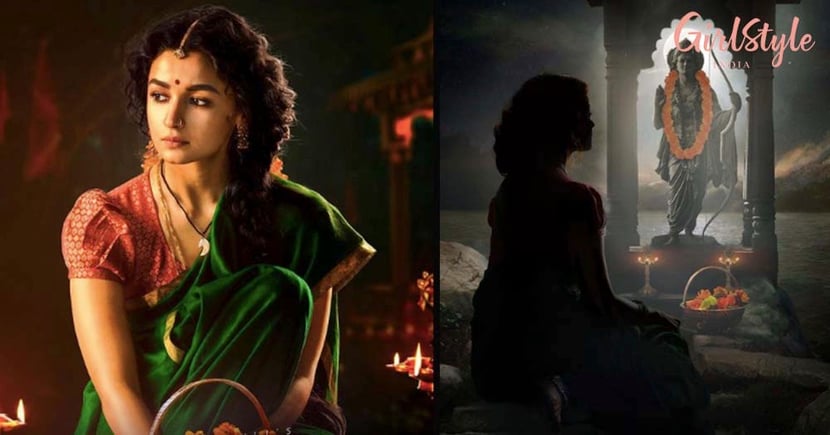 Alia Bhatt Looks Stunning as Sita in First Look Of RRR And She is Giving Us Major Traditional Vibes!

It all started with the Gangubai Kathiawadi trailer last month and we put all our bets on Alia Bhatt for 2021. One look at her outstanding performance and we became a fan! Now, not even a month has passed since then and her first look from SS Rajamouli's Roudram Ranam Rudhiram (RRR) comes as surprise. We genuinely feel that Alia's on her way to make it to one of the most epic years in her professional life and we are cheering for her, while she is at it!

Taking a look at the posters, Alia has already given us some-dropping looks from the movie to fuel our excitement. And her freshly dropped poster from RRR is all things beautiful. Here's everything you need to know about the look:

The movie is set against the backdrop of the colonized India back in the 1920s and is a fictionalised account of Telugu tribal leaders Alluri Sitaram Raju (Ram Charan) and Komaram Bheem (Jr NTR). Alia Bhatt is playing Sita, Sitaram Raju's wife in the film. This film also marks Alia's debut in the Telegu film industry and the actress has decided to do it with great passion.

Her first look from the film evokes a traditional image for us. Alia is styled in a green crepe silk saree paired with a puff-sleeved brocade blouse. With the modest neckline and the striking contrast, the aesthetics of the poster will instantly take you to South India.  Alia has been dressed up in a crepe saree considering that Tamil Nadu is known for its crepe silk drapes right after the popular & worldly famous Kanchipuram.

Even though the look is simple it is still quite impactful. A stunning piece that you would *add to the cart* with a second thought. This has got us hooked on looking for more since the stylist has hit the spot and we are hoping that the film has more silk looks for us in store. For hair and makeup, we feel it's Alia Bhatt's curly hair that is elevating the entire look. There is something so intense and real about the centre-parted curly hair that we are falling in love with the rawness of it. The hair is loosely braided together with the addition of a minimalistic maang tikka. This and a touch of tangerine blooms in the hair are a win-win for us! That being said, the traditional maroon bindi is definitely adding to the charm of this ethnic look. We also like how Alia has got intense kohl-rimmed eyes while keeping the skin base minimal.

When done the right way, period dramas have a way of starting trends and we can see that happening with Alia's looks from both Gangubai Kathiawadi and RRR.  Like we said this girl is on a mission this year and we are here to *woot-woot*.