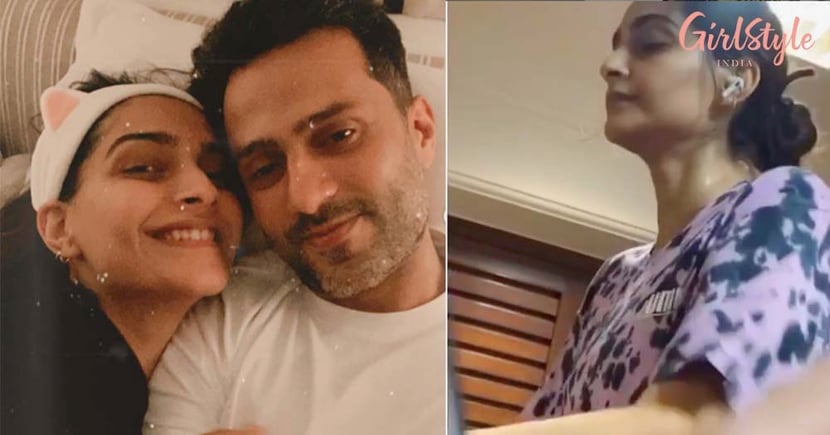 Just a few days ago actress Sonam Kapoor celebrated her 35th birthday with her family in Mumbai. The actress was quarantining with hubby Anand and her in laws in Delhi but was surprised by hubby dearest when they jetted off to Mumbai to celebrate her birthday. All thanks to the multiple stories that Sonam, Rhea and Anand updated on their social media accounts we got to see birthday celebrations and numerous cakes that Sonam got an opportunity to cut and enjoy. Now after enjoying all those mouth watering cakes, the next best thing to do was to hit the gym which, Sonam seems to did with all her energy levels and we have a video to prove it.

While the actress was busy working out, her hubby dearest Anand turned into a secret videographer and captured her Sonam's video as she is busy crooning a song that is being played in the background from her sister Rhea's playlist. In the video we can see Sonam doing cardio wearing a purple Puma loose fitting t-shirt  and enjoying herself as she works out.

Anand uploaded the video on his social media account and wrote, “My entire @sonamkapoor ! Happy Birthday Month! PS that’s your playlist @rheakapoor…” It was not long that Sonam posted a comment “Asss... how can you take this video of me and post it .. assssss…” The duo definitely give all their fans major couple goals and we just cant get enough of it.