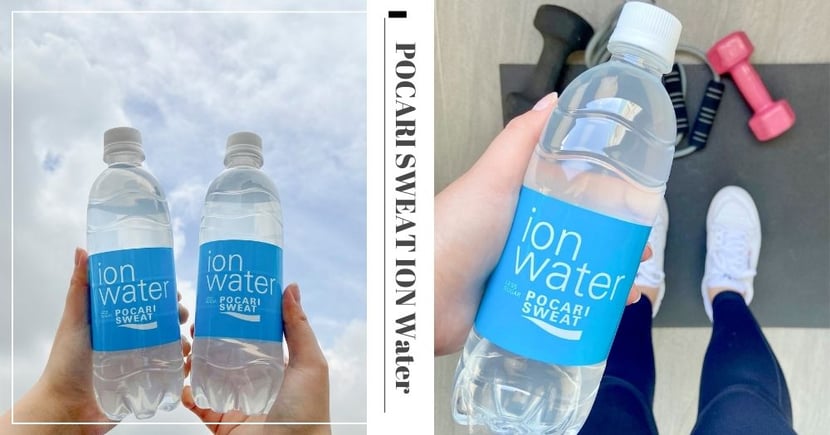 Like many other Singaporeans, I need my weekly dose of bubble tea with a good amount of sugar after a tiring week of work because I see it as a reward from myself, to myself. Apart from boba runs, I also love sweetened green tea and fizzy drinks to go with my meals. Sugar also helps to make the drink more palatable, so it tends to be my preferred option after exercising as compared to water.

So trust me when I say my sweet tooth knows no bounds, and was devastated when I was tasked with switching out my sugary drinks with POCARI SWEAT ION Water. POCARI SWEAT is a Japanese isotonic drink brand that most Singaporeans are familiar with - I still remember seeing bottles of this drink at the finishing line of cross country runs back in school till this day. But in case you didn't notice, the packaging looks a bit different and that's because POCARI SWEAT ION Water is a fairly new product which launched in 2018 in Singapore, with a lighter blue label.

While POCARI SWEAT is for those who sweat a lot after an intense workout, the lighter ION Water is suitable for daily consumption. It's developed to hydrate the body, but the biggest difference is that it contains 48% less sugar than regular isotonic drinks! It's also sweetened with natural sugar so there's no need to worry if you are concerned about artificial sweeteners.

Just like POCARI SWEAT, ION Water contains seven essential electrolytes to help replenish what your body loses through perspiration. Though isotonic drinks are typically consumed after a workout, ION Water can also be drunk whenever you sweat throughout the day to rejuvenate your mind and body.

Truth be told, I thought it would be a difficult feat for me to abstain from sweet drinks, but ION Water changed my mind from the get-go. It has a refreshing sweet taste that's not overpowering so it satisfies my cravings for sugar, while also being healthier (all thanks to its reduced sugar content) than regular sugary drinks.

Here are the changes I noticed in my body after drinking POCARI SWEAT ION Water:

Body recovers faster after a workout I know that rehydrating my body after a workout is extremely important because I have to replace the fluids lost during exercise. But that's when sweet drinks are the most tempting - think about that icy cold drink with a burst of sugar! Alas, I knew I couldn't give in to temptation so I reached for the bottle of ION Water instead of that sweetened green tea.

I took my first sip begrudgingly, but was pleasantly surprised when the light and crisp taste of ION Water hit, along with a slight hint of sweetness. It was refreshing and cooled my body down instantly just after gulping down a few mouthfuls. I also noticed that it quenched my thirst much more efficiently as compared to when I drank sweet drinks after a workout.

I felt the biggest difference the next day when I was up and ready for a long day ahead with minimal muscle aches, something I would usually have to suffer with after my weekly workouts. Turns out, rehydrating my body adequately helped to restore electrolyte balance (which is lost through sweat during exercise) and played a significant role in muscle recovery.

Plain water helps in rehydration but is not enough to replace the electrolytes lost sufficiently - this is where ION Water comes in to replenish them! I wouldn't say the changes in my skin were so significant that people started complimenting me, but I definitely noticed that I had less breakouts. If you didn't know, too much sugar can aggravate acne so the less sweet drinks I consumed, the less the flare-ups occurred. Diets high in sugar can also accelerate skin ageing as it breaks down collagen - one more reason for me to cut down on sugar!

Apart from cutting down on sugar for better skin, the electrolytes in ION Water helps to prevent skin dehydration so that it stays hydrated from within. I noticed how I had a natural, dewy glow to my skin and it also stopped producing more sebum to overcompensate.

ION Water tasted good and satisfied my cravings for sugar without the guilt, while also helping me to consume less sugar and hydrating my skin at the same time. Have you noticed how you tend to always feel sleepy after a meal or dessert high in sugar? That's because excessive sugar impedes the production of Orexin, a chemical in the brain that stimulates wakefulness. No wonder I always felt like I was in a food coma after cans of sweet drinks.

ION Water acted as an alternative for when I was craving something sweet but didn't want my efforts of switching out all my sugary drinks for that one month to go to waste. I noticed I felt less lethargic as compared to when I downed a can of sweet drink. This is perhaps due to the 48% reduced sugar content of ION Water.

In addition, studies have shown that dehydration can make one feel sluggish and lower performance, so staying hydrated with sufficient fluid and electrolytes by drinking ION Water likely made me more alert.

Cutting down on sugary beverages when I have already been so used to having bubble tea and canned drinks on a daily basis was hard. But ION Water served as a stepping stone for me to lead a healthier lifestyle which I'm sure my body will thank me for years to come.

Now, I no longer feel that anything else other than sweet drinks won't be able to bring me joy, because an icy cold bottle of ION Water can also do so!

Where to get POCARI SWEAT ION Water in Singapore Get a FREE tote bag as gift-with-purchase Receive an exclusive ION Water tote bag when you purchase $12 worth of POCARI SWEAT or ION Water. Each purchase must include at least two bottles of ION Water 500ml.

This is available at selected NTUC FairPrice and Sheng Siong outlets. Promotion is valid from 1 to 31 August 2021, while stocks last. Check out www.pocarisweat.com.sg for more details.

This post is brought to you by POCARI SWEAT.