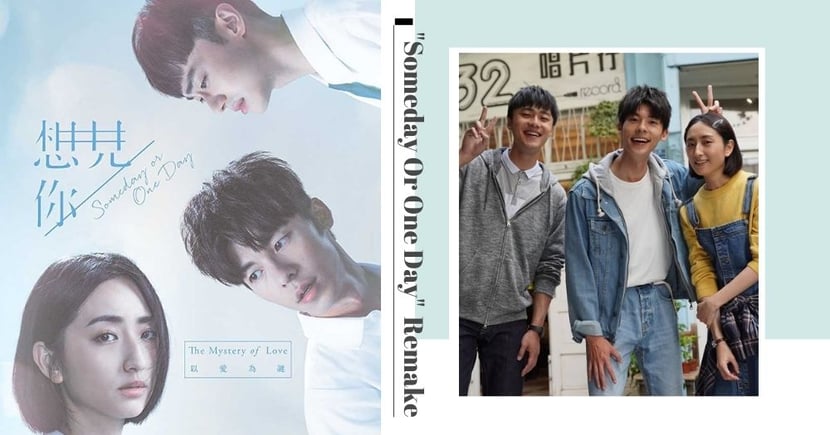 2019 time-travelling romance mystery drama Someday or One Day (想見你) was a hit not only in Taiwan but also the rest of Asia, and helped propel its leads like Greg Hsu and Patrick Shih to fame.

Almost two years since its release, it has been recently confirmed that there will soon be a Korean remake! Of course, fans and netizens alike were excited and have already started to plan their dream cast. For the uninitiated, Someday or One Day follows 27-year-old Huang Yu Xuan (Alice Ke) as she grieves over her boyfriend Wang Quan Sheng (Greg Hsu) who died in a plane crash. Yu Xuan wakes one up day as 17-year-old Chen Yun Ru (also played by Alice Ke) who looks exactly like her and meets Yun Ru's schoolmates, Li Zi Wei (also played by Greg Hsu) who looks exactly like her boyfriend Wang Quan Sheng, and Mo Jun Jie (Patrick Shih) who has a crush on her.

And if you haven't watched this masterpiece, these are the six reasons why you need to do so now: it's so much more than just romance and mystery, the leads' unbreakable friendship will touch your heart, you will get to go on a rollercoaster ride of emotions, the leads' convincing and great acting will keep you hooked, Greg Hsu will make you swoon, and the plot will keep you guessing till the very end.

Read our detailed write-up on the six reasons here. Someday or One Day was so popular that the music video for its theme song, Miss You 3000 想見你想見你想見你, has garnered over 48 million views (at the time of writing).

The series was even aired in Korea last year! npioe Entertainment and Lian Contents announced that they have obtained the remake rights for Someday or One Day and will start producing the Korean version soon.

Since the confirmation, fans and netizens have voiced their opinions on their dream cast.

Some of the more popular names we saw were mentioned on Weibo are: Lee Jong Suk has that cheeky and boyish look perfect for playing the fun-loving Li Zi Wei, but he can also be a brooding hot guy like Wang Quan Sheng. Park Seo Joon also has monolids like Patrick Shih and we can certainly see him playing the role of Mo Jun Jie, a sweet and shy guy who cares for his crush in little ways. Another favourite is NU'EST Minhyun, who once sang a cover of Someday or One Day's theme song. Aren't the similarities uncanny? Playing both Huang Yu Xuan and Chen Yun Ru will not be an easy feat but we foresee Park Shin Hye nailing it with all the experience she has gained since starting out as a child actress. Singer and actress IU has been proving her acting skills in dramas such as Hotel del Luna and we can totally see her pulling off the role of both Huang Yu Xuan and Chen Yun Ru.

Take note that these are just what netizens are hoping for and the official cast for the Korean remake of Someday or One Day has not been finalised yet. Who else do you wish to see as the main cast of the drama?

While you are here, check out these other drama related articles: