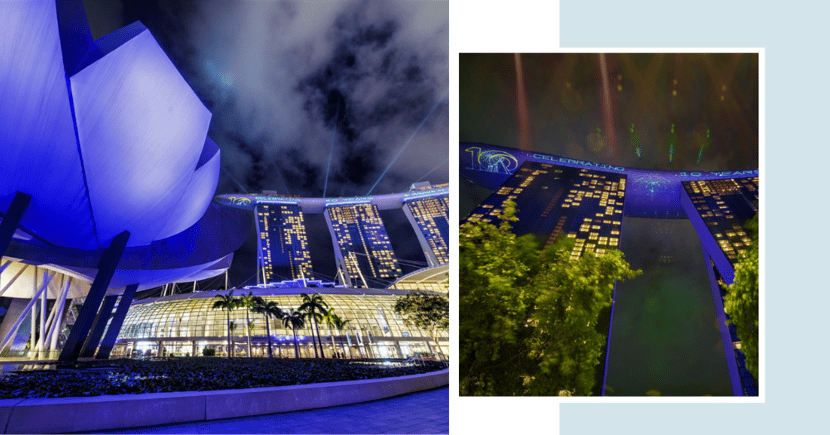 Nothing to do in Singapore? Well, that’s not entirely true. Despite restrictions on certain entertainment venues, activities, and events, there’s still plenty of fun stuff to occupy yourself with - try taking inspiration from our list of 18 new things to do in November 2020, for starters!

If you can’t make time for those, then perhaps you’ll be able to fork out just 3 minutes to witness Marina Bay Sands’ new laser light show. Happening nightly from now till 25 November, this free spectacle is part of MBS’ 10th anniversary celebrations and will be projected across the whole area, including the ArtScience Museum.

Read on to find out more about the free laser show at Marina Bay Sands, Singapore! Marina Bay Sands’ 10th anniversary light show will be happening every night in 3-minute bursts, with intervals of 30 minutes from 8pm to 11.30pm. This light show will involve laser projections, animations, and a series of starbursts that are sure to dazzle. Sounds like a great way to end your night after dining at one of the fancy restaurants nearby! Coloured beams will be shooting out from the top of MBS itself, along with special celebratory wordings commemorating the past 10 years.

You might want to view this from afar - such as from the Merlion Park at Fullerton - if you don’t want to crane your neck staring directly upwards! At the same time, the ArtScience Museum will serve as a backdrop for more light displays that highlight MBS’ history built over the past decade. This light show will only be running for a week, so if you work in the area, it’ll be worth heading down to catch a glimpse of it while you still can! After all, it’s free, so why not?

For more ideas on things to do in Singapore, check out these articles:

Share this with a friend you wish to watch this with!