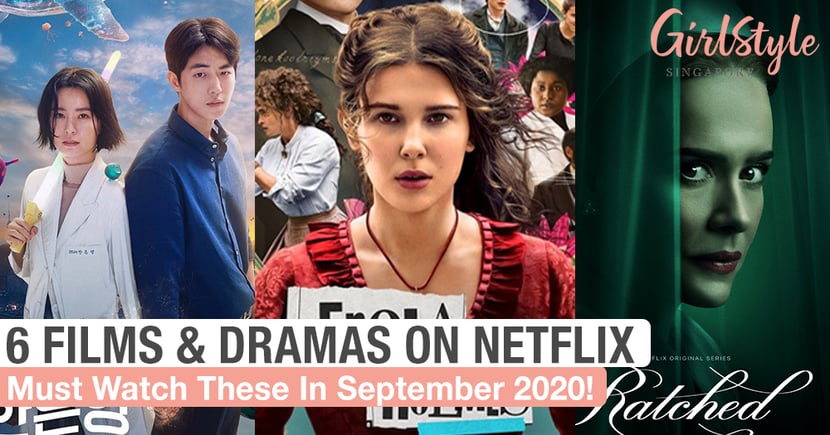 Time to plan a Netflix and chill party with some friends or your bae because here's a list of exciting new movies and dramas you need to watch on Netflix Singapore in September 2020.

Check them out below! Record of Youth is a romantic youth drama following the lives of young people in the world of modelling and their journey as they pursue their dreams. Starring popular actors Park Bo Gum and Park So Dam, this is one of the most highly-anticipated K-dramas in the month of September.

See these five reasons why you need to watch Record of Youth now. #ALIVE is a zombie survival thriller is about a mysterious outbreak that spreads throughout Seoul and grows out of control. This traps survivors alone inside their apartments without access to data, wifi, texting and phone calls.

The movie garnered one million moviegoers within five days of its release in Korea although it premiered in the midst of a pandemic, so it's safe to say this is another Korean zombie movie you must watch! Read more about #ALIVE here. The Devil All The Time is a psychological thriller set in Knockemstiff, Ohio. The synopsis is described as "an unholy preacher, twisted couple, and crooked sheriff converge around young Arvin Russell as he fights the evil forces that threaten him and his family".

Starring big names such as Tom Holland, Bill Skarsgård, Robert Pattinson, and more, this is one movie you shouldn't miss out on. Ratched is a psychological thriller drama series that tells the origin story of asylum nurse Mildred Ratched. Played by Emmy Award Winner Sarah Paulson, this riveting series will show how Mildred begins working as a nurse at a leading psychiatric hospital, but beneath her stylish exterior lurks a growing darkness.

Ratched is also from the creator of American Horror Story so it's an understatement to say we're excited for this! Enola Holmes is a mystery film that chronicles the adventures of Sherlock Holmes' younger sister Enola, as she embarks on a quest to find her missing mother. While searching for her mother, Enola uses her sleuthing skills to outsmart big brother Sherlock and help a runaway lord.

Millie Bobby Brown, star of Netflix series Stranger Things, plays Enola Holmes. Remember to mark your calendar and don't forget to catch this film when it drops, especially if you are a fan of this young, talented actress! In The School Nurse Files, Jung Yu Mi plays Ahn Eun Young, a school nurse who has an unusual gift and uses it to protect students from monsters only she can see. Nam Joo Hyuk plays Hong In Pyo, a Chinese language teacher, who will work with Ahn Eun Young to keep their students safe.

The teaser for the drama has been released and is looking really bizarre so far, but that just makes us look forward to the drama even more! There will be a total of six episodes.