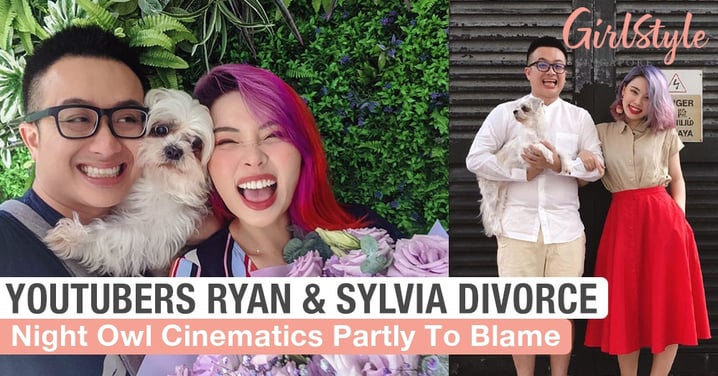 NOC's Ryan & Sylvia Divorce After 10 Years Of Being Together

Those familiar with Singapore’s YouTube scene would probably know of Ryan Tan and Sylvia Chan, founders of Night Owl Cinematics, as an unbeatable power couple.

Unfortunately, this seemingly perfect relationship ended up being one that would eventually run its course.

After exactly a decade of being together, the couple have called it quits, much to the shock of fans. In fact, they had already been divorced in March 2020, but only announced the news to the public via a video yesterday on 31st May 2020.

Read on to find out more about Ryan and Sylvia's breakup.

Singapore’s law requires couples to be separated for 3 years before getting divorced - which means that Ryan and Sylvia have been harbouring this heartbreaking secret from fans for longer than that.

In their 45-minute clip addressing the issue, the couple said that they put off announcing the sad news as it took time for them to build up the courage to share something so personal - especially since their usual videos are always something positive.

It’s not as dramatic as you think; The relationship didn’t end in a huge fight, and the divorce was an amicable decision. In fact, they were even holding hands when they walked into the divorce lawyer's office, and according to the lawyer, this was the most peaceful divorce she’s ever encountered.

So, the big question: Why did they break up?

Yup, Night Owl Cinematics, the very company they’ve built together, was partly the cause for the couple’s split.

Leading up to the divorce

The duo first met at the tender age of 16. They started dating at 21, and got married within just 8 months of that. At that time, both were lost in life and trying to find themselves, but knew that they wanted to be on the same path together.

However, as they grew up, they grew differently, and it turned out that their goals and priorities in life were not the same.

Introverted and emotionally sensitive, he wasn’t able to cope with feeling like a “zoo animal” each time he went out, with people snapping photos of him with their smartphones.

Sylvia elaborates on the same sentiment, saying, “We don't blame NOC, but if there is something that you can pinpoint it is probably the fact that our personal lives and our professional lives are so intertwined together, so there is in a sense a lack of space to grow different parts of your life"

Their relationship took a backseat as they focused more and more on work.

Whenever they had fights at home, they would have to put “commas” into those arguments as they needed to channel their energies into work-related matters and put on a front for the sake of getting the job done. Once back home, they would already be too tired to address the personal issue at hand, and many arguments just went unresolved.

They even prioritised their staff over their own marriage, helping to fix their boyfriend-girlfriend problems instead of their own relationship.

It got to the point where they would forfeit special dates to go on shoots. After the first time they skipped Valentine’s Day for work - so that their staff wouldn’t have to work overtime or use their own leave - it slowly became a regular thing. Before they knew it they were also skipping anniversaries.

Ryan says that if he could go back in time, he would marry Sylvia at their current age so that it would be a marriage for life. “All the elements were right, we just got married at the wrong time”.

Sylvia adds, "I would put a lot of focus and priority on the relationship as well, and not expect that it will do well on its own."

Fans of NOC need not despair, as the couple will continue working together - as they have been for the past 3 years. So you can continue to look forward to the same comedic content they’ve been churning out on an almost daily basis.

Ironically, the ex-couple say they have been connecting more on a personal level without the pressure of being a power couple.

Their business has also improved, with a stronger working relationship. Ryan says, “Working together as business partners, we have less expectations. It's not like she's my business partner, but also my wife. I feel a lot better. Everytime we argue I will just tell myself, ‘It's just work, it's fine’”.

They both agree that they are family to each other and will always love each other, but perhaps not romantically.

It’s unlikely that they will get back together, and are both looking to date other people eventually. Sylvia shares that the love she feels for Ryan is now more of a protective family love, and she views him as a brother since the romantic side of their relationship has run its course.

She even manages to crack a joke out of the situation, saying, "Moving on, I would like to propose a reality series called Finding My Ex-Husband A New Girlfriend where I interview all these b*tches then I'll be like no...you're not kindhearted enough. No..he only likes girls who are sweet. No...you cry too much. No...he likes a girl who cries. Then I'll ask them to cry and if you cannot cry on command, you're out!"

Ryan also made a few humorous statements during the video, but was less composed and cried a couple of times throughout.

As for their dog Porky, he’s currently under “shared custody” of the duo, moving back and forth between their two homes. Of course, Porky doesn’t understand what’s going on, and still waits at the door for the other person to come back home - which never happens since they are living apart.

They hope to bring Porky back to the office where he’s constantly surrounded by people who love him - but only after things start to get back to normal in this COVID-19 period.

Wrapping up the video, the ex-lovers thank their fans for their support. Ryan hopes that viewers will respect their privacy and says that he would not like to address this issue ever again. The clip then ends with a 4-minute video montage of their memories together.

Dedications on Instagram to each other + Ryan mentions past suicide attempt

Apart from the joint video, Ryan and Sylvia also took to their own Instagram accounts to post separate dedications to each other.

Sylvia’s mainly thanks Ryan for all they have been through together, reminiscing on how they got married at 22 with a discounted pair of $800 rings as that was all they could afford.

Dear Dabao, Thank you for one decade. I dare say I truly lived this ten years with no regrets. It’s been crazy isn’t it. We got married at 22, with a $800 set of discounted wedding rings cos that’s all we had. The future was bleak and we were so scared weren’t we? “It’s me and you against the world.” And against all odds, we did put up a good fight. And I think we did good. We did build something amazing together. We built the NOC family. We are surrounded by amazing people who love us and support us. And this will always be ours. You know this already, that I love you always. Behind the glamour and lights, beyond the public eye, there’s just so much we have been through together. All the laughter, the tears, the memories; no one can take these away from us. So, at the end of our marriage, I just want to thank you. Thank you for everything. I have never regretted my decision to be with you and looking back, I thank god it was you. If I could do it all over again, I would still choose you. It was the most exciting decade of my life walking side by side with you as your wife. Even our divorce, because it’s you, we took it in stride. Now, as family, what could possibly stop us? ❤️

Ryan’s post, on the other hand, is a little less lighthearted. Towards the end of his photo carousel is a note highlighting his struggles of being in the limelight - which got so bad that he even attempted suicide after filming a travelogue in Osaka.

"Some viewers berate us for releasing a video 5 mintues late. Some insult us. Some assumed and cast a verdict on us based on the older videos we did. Some write mean things about us. Some pretend to know us and write blatant lies on forums. We essentially became a video factory that gets abused on a daily basis, but yet we put in 10000% effort in every video we put out there."

Dear B⁣⁣ ⁣⁣ I saw this quote. "When two people decide to get a divorce, it isn't a sign that they "don't understand" one another, but a sign that they have at last, begun to."⁣⁣ ⁣⁣ I like to thank you for the past 16 years of memories that you gave me and 10 being married⁣⁣ ⁣⁣ I wish you all the best and I will always love you. Together we will continue to be in each other lives all the way :)

"This isn't humane. The mental and emotional abuse, the unrealistic expectation to live a completely good life, everything is just so exhausting. Many celebrities and public figures took the route to suicide not because they wanted to die, they just want the noise to stop. They just wanted the pain to end."

We hope that Ryan and Sylvia will fully heal in time if they haven’t, and be much happier from hereon.