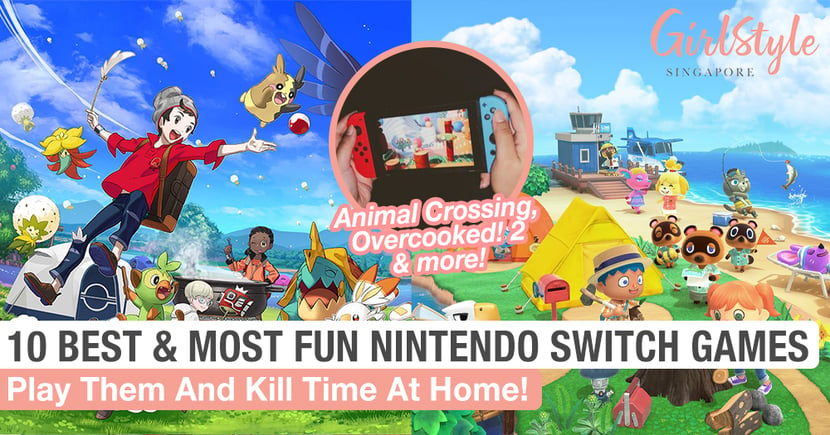 Since we are all currently cooped up at home with nothing much to do, now is the chance to make full use of your free time by playing some games!

We have compiled a list of the 10 best and most fun Nintendo Switch games to play and kill time at home. Psst, you won't even notice that time has flew by when playing these games.

*In no particular order Want to cook but also afraid of burning down your entire kitchen? Play Overcooked! 2 instead to act like a great chef! Journey across a brand new overworld map by land, sea and air. Get cooking in new themes ranging from sushi restaurants, magic schools, mines and even alien planets! This chaotic cooking game lets you play with three other players online or wirelessly on different Nintendo Switch consoles, which means you will get to cook together with your friends. Escape to a deserted island and create your own paradise as you explore, create, and customise in the Animal Crossing: New Horizons game. Show off your island to your family and friends or visit theirs! Build your own community, decorate your own island, construct furniture and many more in this game. Time will certainly fly when you are playing this game and you will never feel bored because there's so much to do! Can't go out and play Pokémon Go? Fret not because you can still relive your childhood memories by playing the Pokémon Sword and Shield game! Begin your adventure as a Pokémon Trainer by choosing one of three new partner Pokémon: Grookey, Scorbunny, or Sobble. Hone your battle skills, level up your Pokémon, assign them Poké Jobs to complete and you can even play with your Pokémon in Pokémon Camp! You know the drill - race your friends or siblings and battle them in a revised battle mode on new and returning battle courses. Choose your favourite characters or tracks when playing Mario Kart 8 Deluxe and have fun zooming around! Experience what it's like being a doctor in the Two Point Hospital game. Build and design stunning hospitals, cure unusual illnesses and manage troublesome staff. Act like you've got your life together in this game by managing everything and spreading your budding healthcare organisation across Two Point County. We have a survival game for the thrill seekers! When she left Earth, Ellen Ripley promised her daughter she would return home to celebrate her 11th birthday but she never made it. 15 years later, Amanda Ripley learns that the flight recorder from her mother's ship has been recovered. She enters Sevastopol space station to solve the mystery of her mother's disappearance, only to confront an unknown menace. Engage in a terrifying quest for survival in Alien: Isolation as you navigate the Sevastopol station. You are unprepared and under-equipped, so you will need all your wits to get out alive. This shooting game lets you splat ink instead of shooting enemies in the head! Work with your teammates to claim turf with your team's colour in the Splatoon 2 game. You will also have a lot of fun dressing up your character in new fashion trends, weapons and gear. Looking for an action-adventure game? In Astral Chain, the last remnants of humanity depend on you and to save the world, you must investigate its dark side. Explore a futuristic cyberpunk metropolis, solve crimes and see how the last remnants of humanity struggle to survive. As you save the world from invaders, you will also interact with citizens, question suspects, and team up with members of your task force to solve cases. If you are sucker for games with beautiful graphics, this is the one to try! In Untitled Goose Game, you are a goose let loose on an unsuspecting village. Make your way around town, from peoples' back gardens to the village green, setting up pranks, stealing hats, honking a lot, and generally ruining everyone's day. Doesn't this game sound like a lot of fun? Well, it is! Destress with this game that will make you laugh and want to do your very best at annoying everybody. If you are into tactical role-playing games, you should try playing Fire Emblem: Three Houses. War is coming to the continent of Fódlan and you are invited to teach one of its three mighty houses, each comprised of students brimming with personality and represented by a royal from one of three territories. As their professor, you must lead your students in their academic lives and tactical battles wrought with strategic, new twists to overcome. Which house and which path will you choose?