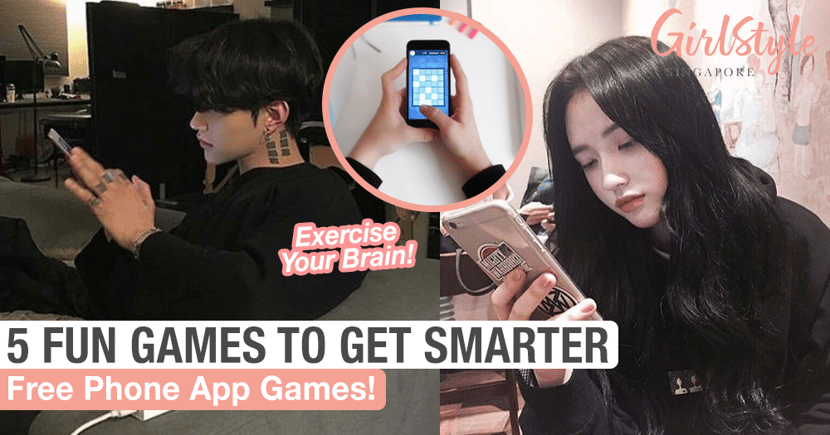 For the latter, we have five fun and free app games you can play on your phone while on the train or bus to exercise your brain.

While there aren't any extensive studies that measure if and how much playing games will make you smarter, they will most certainly make you feel smarter. 😎

Keep reading to check them out! The fun mini games in the Peak app are devised by neuroscientists, academic researchers and game experts to push you hard with short, intense brain workouts. Each day, there will be a different and random selection of games so you won't get bored of it. 🤓

One interesting thing about this app is that it tests specific cognitive skills such as your focus, memory, problem solving, mental agility. It also shows you your performance compared to previous days and your rank in comparison with other players. This app was designed in partnership with over 100 researchers from around the world, experts on subjects ranging from genetics to chemofog to education. There are a range of games to choose from that each challenge a particular cognitive ability: memory, attention, flexibility, problem solving, word, math and more.

Their independent trial involving 4,715 participants showed that the group that played Lumosity five days a week, fifteen minutes a day, improved in performance across a battery of cognitive assessments.

The colourful graphics and fun gameplay makes you forget that you're doing a brain workout and seems like you're just playing an entertaining game! Don't be fooled by this cutesy-looking game! Although the gameplay is simple enough for even young children to play, it requires strategic planning, organisation skills and flexible thinking in order to get high scores.

Players are given random items to be placed on a 6x6 grid field to build a town. Placing three or more common items close together will merge it into a single and more advanced item. For example, three grass patches become a bush, three bushes a tree, three trees a hut, three huts a house, and so on, with the final merge creating a giant floating castle! 🏰

There are also cute but disruptive bears that block your way and turn into little cathedrals when you trap three or more together.

When all tiles are filled, it's game over! Your aim is to keep merging items to last as long as possible and build the most epic town. There are plenty of word puzzle games to choose from, but instead of a plain one, Alphabear stands out with the use of cute bears to amp up the entertainment factor!

In this game, you spell words by selecting letters on a grid and collect cute bears whose powers boost your score. The aim is to collect bigger bears! When you use letters that are next to each other, bears appear. The more letters you use in an area, the bigger the bear gets, and the more points you earn.

Bears that you win can be used as power-ups in future games. They increase the points you earn for using certain letters or spelling certain words, extend your timer, increase or decrease the frequency with which letters appear, and more! Has your student self ever wondered: In what real life situation would I need to use my skills in algebra, vectors, complex numbers, combinations and permutations, etc.?! Star Dash Studios is a game that will help restore a sense of faith and meaning in the maths education you worked so hard for. 🙌

This game is designed for 16-25 year old gamers who struggle to see the relevance of maths in their lives. The gameplay takes place on a movie set with the player as a runner on their first job in the film business. The aim is to complete the missions the crew set by using everyday maths and rise up the ranks from runner to producer. You'll collect coins, cover a distance, and help the crew to complete a to-do list.

The games are linked to real-life scenarios and helps players to see the value of maths in the workplace and daily life. Voiced by British YouTube star Chris Kendall and with creative, colourful graphics, you'll forget that you're doing maths!