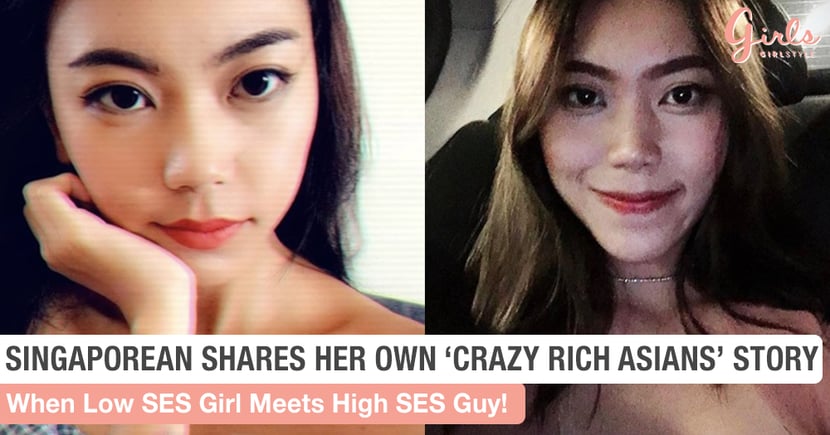 She met the real Crazy Rich Asian and this happened. In a blog post published on Sept 4, Singaporean blogger Coco Ong wrote about the short-lived love story she shared with someone from a privileged background as a low ses, girl-next-door and it went viral.

This man whom Coco referred to as Michael was her definition of Prince Charming.

.... He’s tall, a scholar from this extremely prestigious university (shan’t name which), a commando, came back to Singapore and has been working for awhile. He’s from a good background, high SES by definition, plays golf, and also very disciplined as a person (which was what I really liked about him).

As compared to him, she knew she was a "small fry" in Singapore and she wasn't a confident girl but he chose her.

Michael first recognised Coco from some ads she were on and before they started dating, the two 'coincidentally' bumped into each other somewhere multiple times.

When they first started dating, Michael mentioned that he's never dated "any girl like her". In fact, he used to date fancy girls who carried branded bags, drove super cars and stayed in landed houses.

Unlike those girls, Coco is different. She carried canvas tote bags when they met, have no car license and was stuck with a student loan to pay. Coco then told him that he's probably just dating her for the novelty and it's only a matter of time before he goes back to those high SES girls.

#3 Prince Charming have doubts about her family background

Shit happened when Coco felt that something was off and decided to question Michael about their relationship status.

"I think we’re going somewhere, but I have my doubts sometimes."

When asked what those 'doubts' were, Prince Charming pointed at her family and financial background. When they first started dating, Michael thought that time would help.. and that Coco might eventually start earning 15K/month.

Though Coco was hurt, they continued seeing each other until he started going on dates which... Coco knew and somehow didn't have any issue with it.

One day, he met a doctor. And Coco knew how happy Michael was to announce that she's a doctor as he also emphasised that she came from a good background; almost as if it's a message for Coco to f*** off already. And she did.

When their short lived relationship ended, Coco realised that it was elitism at work and she went on to talk about how different they were brought up.

Michael has been brought up in such an environment surrounded by nothing but the best. The best facilities, the best amenities, the best teachers, the best influence. I can understand where he’s coming from — that if he worked so hard in his life, why should he be with someone who could potentially pull him down or make him feel less?

Coco shared that she was brought up in a humble Chinese family whose father - the breadwinner - worked very hard everyday to put food on the table.  Though her parents were school drop-outs, her dad knew the importance of having a good character.

He may not be one of these Crazy Rich Asian fathers who is able to spoil their daughters like princesses with ferraris, but he did in his very own way. Ever since I was schooling, he always sat me down and shared what he felt about life. He was an objective man, which makes me a really rationalised person.

At the end of her blog post, Coco also said that despite how their relationship ended, she shared good memories with Michael. To read her full blog post, click here.

If you're a low SES girl, would you date a Crazy Rich Asian? Let us know!