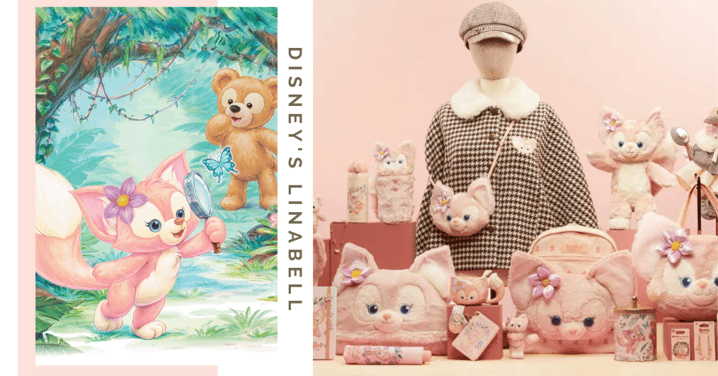 Mickey Mouse, Winnie-the-Pooh, and the Princesses need no introduction - these are all classic Disney characters that go way back to our childhoods. On the other hand, there’s also Duffy and Friends, a relatively newer set of characters featuring an adorable brown bear plushie and his other stuffed animal friends. Wildly popular in Japan as well as other Asian countries like China and Hong Kong, the Duffy and Friends posse has slowly expanded over the years.

Joining the rest like ShellieMay, CookieAnn, and Gelatoni is the group’s latest addition, LinaBell. This lovable pink character has captured the hearts of many and since emerged as many Disney fans’ new favourite. Here’s what you need to know about her, and where you’ll be able to get LinaBell-themed merchandise in Singapore.

LinaBell can easily be mistaken for a cat, but unlike Gelatoni, the only feline in the Duffy and Friends franchise, she’s actually a fox. And true of her species, she’s very intelligent - though instead of being stereotypically sly, she’s kind and helpful!

#2: She’s currently exclusive to Shanghai Disneyland, but will debut in Tokyo & HK soon

LinaBell first made her appearance at Shanghai Disneyland in late 2021, and has been exclusive to that branch of the theme park since. However, you’ll be glad to know that she’ll also be scheduled to debut at Tokyo DisneySea and Hong Kong Disneyland later on in September this 2022  - something to keep in mind when making future travel plans!

#3: She loves nature and mystery-solving

You’ll likely see LinaBell frolicking among flowers as she loves nature - and that means that you can expect a good amount of the merchandise featuring her to be sweet and floral-themed, perfect for girly girls!

#4: Her quick wits helped a lost Duffy find his way

And so the story goes: One day, Mickey Mouse and Duffy the bear got separated while chasing butterflies. LinaBell happened to pass by the lost Duffy, and noticed that something was wrong. Piecing together some clues, she quickly managed to help him find his way back to Mickey.

#5: A magnifying glass & orchid are her defining props

LinaBell’s magnifying glass is one key tool that aids her in her mystery-solving expeditions, while the purple orchid by her ear was a gift from Duffy - a token of thanks for helping him when he was lost.

Where to get LinaBell merchandise in Singapore

For now, you can only get official LinaBell merchandise in Shanghai Disneyland, but once the character makes her appearance at Tokyo DisneySea and Hong Kong Disneyland, you’ll be able to pick them up from there too. When that happens, there might be a possibility of ordering them online via Japan’s shopDisney store, through a third-party shipping service.

There’s a newly-opened shopDisney store in Singapore, but it doesn’t have any Duffy and Friends merchandise listed up yet. Perhaps in time to come?

If you can’t wait, check out Taobao’s official TMall vendors or Shopee Preferred sellers - these are some of the more trustable sellers on the respective platforms. We did a quick check and there’s all sorts of LinaBel merchandise listed on the two sites, with items including plushies, phone cases, various styles of bags, and stationery.

Note: Do check reviews, and make your own informed decision regarding the perceived authenticity of the products.